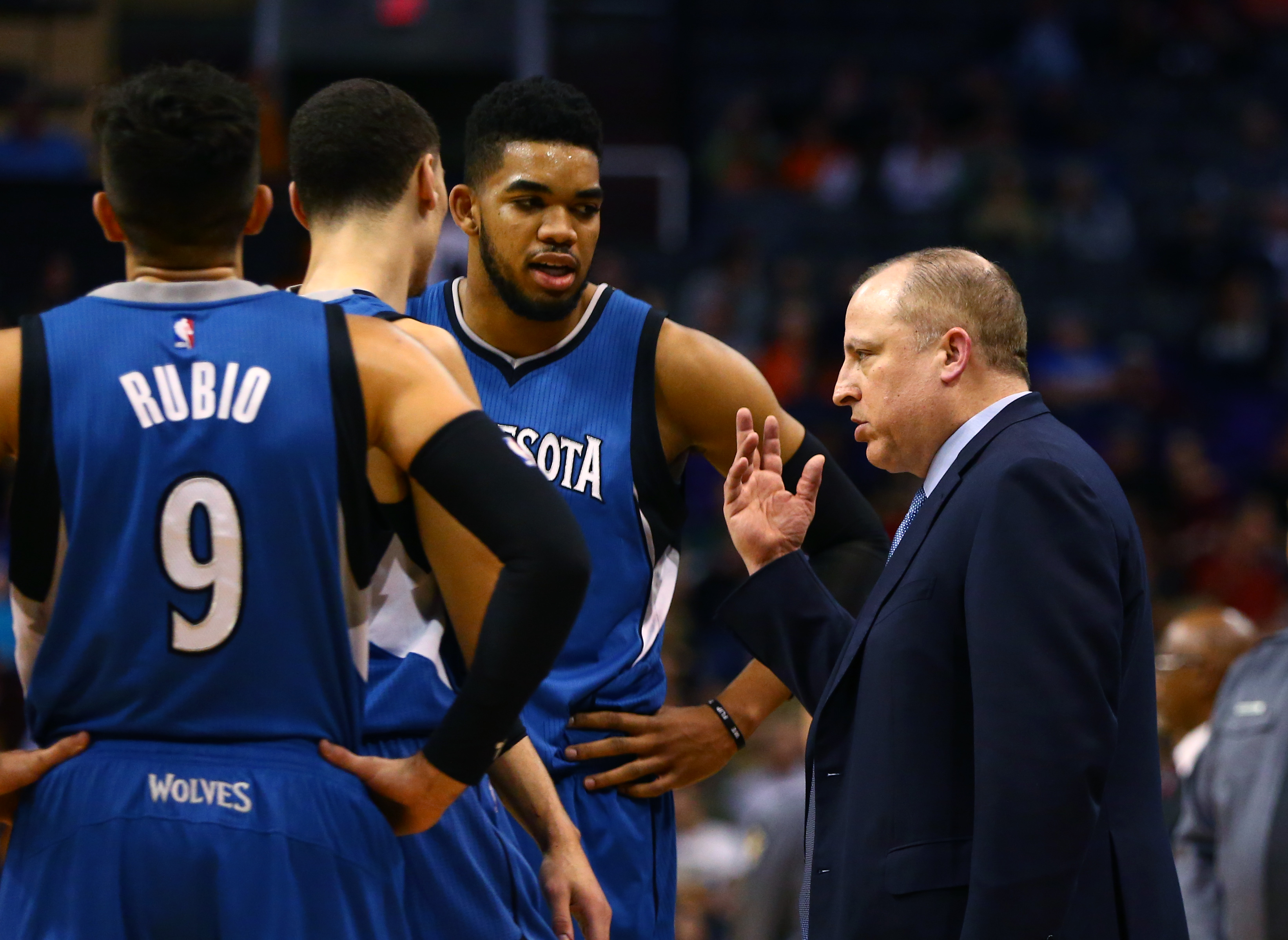 Well readers, the regular season is done, a blowout-filled second round of the playoffs is under way, and even though the Wolves fell short of lofty goals set by many before the season began, there are still plenty of positives to take away from this season. So order that “Take That For Data” T-Shirt (RIP Grit ‘n Grind) and check out how each Timberwolf performed this year.

No seriously. These shirts are fire.

Pek’s time in the land of a thousand lakes may be at an end. Medical retirement would clear him off the Timberwolves cap and perhaps be the closure both sides need. Fare thee well, Pek. From time to time, I’ll think of you and wonder aloud:

Hill played 47 total minutes of uninspiring basketball across seven games, and played just under seven minutes in all of 2017. Nine points, 10 rebounds and almost seven fouls per-36 minutes suggests that he at least played with activity but Thibs made clear in his post-season press conference that he wants vets who can contribute. Jordan Hill ain’t it.

Poor Adreian Payne. Last season, he played a career low 486 minutes. This year that number fell to 135. Payne has decent per-36 numbers: 16 points, 8.8 boards, 1.9 assists, 1.9 blocks, 2.1 steals. There’s still a spark of potential there that may someday be kindled, but it probably won’t be here.

Lance had a strange season. A stint in NOLA and two ten-day contracts with the Wolves were all cut short by little injuries. He endeared himself to Wolves fans with infectious energy and swaggery creativity, but alas, like Odysseus returning to Ithaca after 20 years of wandering, nothing could prevent Born Ready from reaching the shores from which it all began: Indiana. Never change, Lance.

On paper, Casspi’s shooting and versatility should be perfect for the Wolves, yet his 7.3 points, 3.2 rebounds, 1.3 free throw attempts and 20% three-point shooting would easily be career lows. In his 13 games with the Wolves, Casspi had four games with more fouls than points. I still wouldn’t mind bringing him back.

Aldrich is the NBA definition of a C grade, and he did exactly what he was always does: play scant minutes, be a good teammate, rebound and throw up goofy hook shots when given burn. Aldrich is under a reasonable contract for the next couple years, and there’s no harm in having him as a third-string center. Just don’t ask him to be anything more than who he is.

Rush was probably the most frustrating player on this team. Some of that was due to powers outside of his control, like Thibodeau’s inexplicable reliance on him at the expense of Shabazz Muhammad. But some was entirely on him: his 6.9 points per-36 minutes were the lowest of anyone on the team but John Lucas III (who, until writing this, I’d forgotten existed). His 38.6% from three is second best on the team and he helped stabilize the defense once LaVine went down, but really, Rush didn’t provide much.

Jones picked up 21 DNP-CD’s in the first three months of the season. In the final two and a half months, he played in all but one game. While it wasn’t all spectacular, it was almost always solid. Jones has great instincts and quick hands on the defensive end. He has all the makings of a productive backup point guard in the league.

What a roller coaster of a rookie season for Dunn. From potential tradebait for an NBA superstar and presumptive Rookie of the Year to lambasted by fans and probably not even making one of the All-Rookie teams (which, to remind you, Langston Galloway made two years ago for the Knicks). Dunn ended on a high note with his first career double-double, and seemed to find his way a bit as the season went on. His defense is elite, but he needs to figure out how to contribute on the other end if he ever wants to be a starter.

Bjelica spent most of the season clanking threes and looking lost on defense. From October 26th to February 10th, Bjelly cracked 10-plus points eight times and never more than eight rebounds. Then something clicked. From February 12th to March 13th he hit double digits seven times and pulled down three double doubles while shooting 40.5% from three (he shot 31.6% on the season). It was good for fans and Wolves brass to see him be productive before he got injured. I still believe in Bjelly.

Shabazz is a mystery wrapped in an enigma. He’s a creative slasher, erratic but sometimes excellent shooter, and bully on the block but his tunnel vision, lack of feel for the game, and questionable defensive effort have prevented him from gaining the trust of his various coaches (three in four years). This year the soon-to-be free agent played the fewest minutes per game since his rookie year and even per 36 minutes he averaged the fewest points, rebounds, assists, field goal and free throw attempts since he entered the league. His advanced stats stagnated in the areas they didn’t regress, but his scoring single-handedly kept the Wolves in more than a few games when they were still fighting for a playoff spot. Maybe if Thibs had actually played him, he would have found more of a groove.

Before injury, Zach Attack was an absolute revelation on the offensive end. Thibodeau increased his minutes from 28 his sophomore season to 37 per game, and he responded by nailing 37.8% of his 6.6 three-point attempts per game, shooting a career high 54.4 eFG% and upping his points per game from 14 to just under 19. His 3.4 boards and three free throw attempts per game were also a career high. The questions about whether he should be coming off the bench if and when the Wolves becomes a contender haven’t gone away, but it’s clear that LaVine is a vital part of this team’s future.

Dieng had a fine year, but one that didn’t blow anyone away. He improved his three-point shooting, especially from the corners (13-30), continued to rock the midrange, upped his rebounds to a career-best 7.9 per game and provide adequate rim protection. He wasn’t the defensive backbone KAT and the rest of the youngsters needed, but did his job well and without complaint. It may be that his ideal role is next to Bjelly as first big off the bench, and if that becomes the reality, the Wolves could go from being one of the thinnest benches in the league to one of the most reliable.

Wiggins is a star, but still has a lot of improvement to go before he’s a superstar. He averaged career-highs in points (23.6), assists (2.3) and three-point and effective field goal percentage as well as a career-low turnover percentage, despite a substantial uptick in usage. He posted five 40+ point games, 14 30+ and was 16th in the league in scoring. His four rebounds per game are an improvement on last season, though not enough to quiet the doubters. He was also ranked as the worst defensive small forward in the league by Bleacher Report (shouts to Zach LaVine for only getting an honorable mention for shooting guards) and was generally ineffective on that end for most of the season. We’ll see what another summer in Thibodeau’s system does for his defense.

In Spanish Sizzle’s sixth season, he posted career highs in points (11.1), assists (9.1), FT% (89.1%), eFG% (44.8%), 2-point percent (44.3%), field goal percent (40.2%) and three-point attempts per game, all while maintaining his usual combination of crafty defender and on-court spiritual leader. The only thing keeping him from an A was the disappointing start to the season. In the final half of the season, Rubio posted double digits in 32 of the 41 games he played in, dished out 10+ assists 26 times and set career highs in scoring multiple times over. He became confident and effective with his jump shot and even willing to venture to the rim on occasion. In other words, everything this team has always wanted him to be. In doing so, he (hopefully) squashed the incessant trade talk (for now).

KAT is a monster. We all know this. The only thing more impressive than his gaudy numbers is the consistency with which he gets them. The defensive struggles knock him down from an A+ but god damn am I excited to watch this kid keep growing. 25 points, 12.3 boards, 2.7 assists and almost 37% three point shooting. I expect his facilitating to get even better. Side note: I’d love for Thibs to incorporate Towns operating out of the high post with Wiggins posting up smaller guards more. The Wolves have a genuine home-grown superstar. What else needs be said?

Thibs first year at the helm of the Wolves could definitely have gone better. Questionable rotations and an inability to close out even moderately close games reflect poorly on him, but he’s getting to know the players just like the players are getting to know him. The system and the discipline will come. The Wolves are playing the long game, and in the long run, I believe Thibs will get this team where it’s trying to go.

I can’t wait for next season.