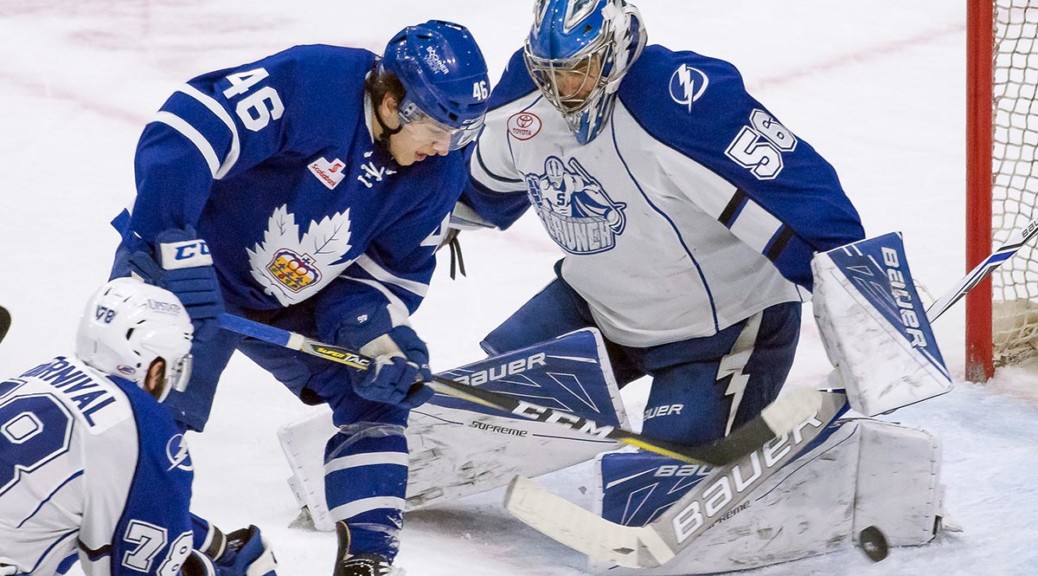 The Toronto Marlies evened the best-of-seven series at two games each as they beat the Syracuse Crunch 3-2 in Toronto, Wednesday night.

Adam Erne and Ben Thomas scored for the Crunch. Erne is on a five-game points streak (2g, 3a). It was Thomas’ first professional post-season goal.

A strong start by the Marlies was the difference in the game.

Erne gave the Crunch the lead at 4:45 of the first period when a Toronto defenseman turned the puck over. The Marlies quickly drew even on Rich Clune‘s first goal of the playoffs.

Toronto scored twice on the power play in the first period when Kerby Rychel and Trevor Moore beat goalie Mike McKenna to give Toronto the 3-1 lead.

McKenna gave up three goals in 33 seconds late in the third of the 5-3 loss in Game 3 on Tuesday night and surrendered three on 16 shots tonight before being pulled in favor of backup Kristers Gudlevskis to start the second period.

Ben Thomas cut into the Toronto lead when he fired a point blast that had eyes and found the top corner over goalie Kasimir Kaskisuo shoulder.

Game five moves to the War Memorial Arena for Game 5 on Saturday.