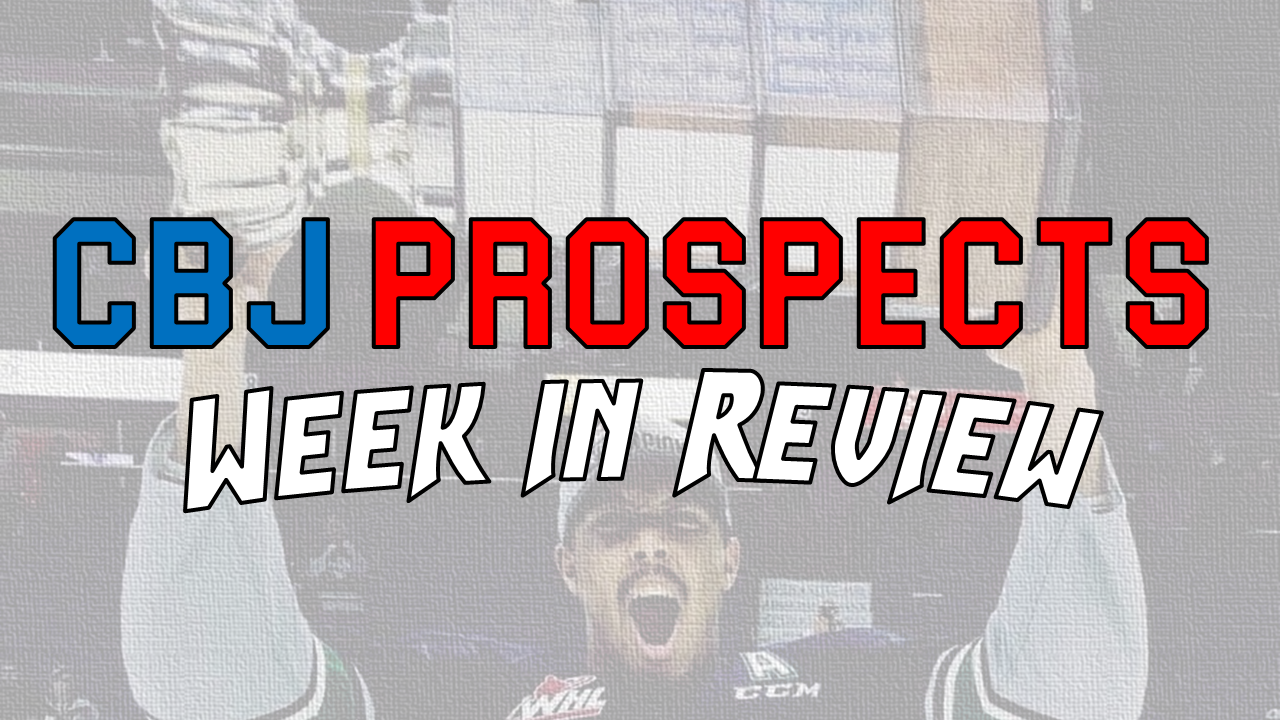 Well folks, we’re coming to the end of the line for the Blue Jackets prospects this season. One player had his season end just short of a championship, and another punched his ticket for the CHL championship during the week that marks the end of the CHL season. The Memorial Cup starts off this coming weekend in Windsor, Ontario.

Pierre-Luc Dubois-Blainville-Boisbriand Armada (QMJHL Lost Series 4-0 to Saint John)
Series Stats 4GP 1-0-1 -5 10PIM
Final Playoff Stats 19GP 9-13-22 +1 26PIM
In the QMJHL’s President Cup Final, the Armada faced off against the top team in the Q, the Saint John Sea Dogs. The mighty Sea Dogs silenced PLD in games one through three. They also kept the entire Armada lineup off the scoreboard for 177 straight minutes starting after a goal late in the second period of game one and ending after a PLD goal in game four.

In the do or die game four, the Sea Dogs took a 2-0 lead before PLD decided to make an appearance in the series. In the second period, Alex Barre-Boulet fired a shot that rebounded out to the wall. Yvan Mongo fought off a check and got the puck to PLD who skated into the slot and snapped a shot to make it 2-1 Dogs. Saint John scored three more times to make it a 5-1 win clinching them their third trip to the Memorial Cup and first since 2012 when CBJ prospect Mathieu Corbeil was in the crease.

After the series, reports came out that PLD played with a shoulder injury.

In the playoffs, PLD finished tied with Saint John’s Spencer Smallman for fifth in scoring with 22 points He also finished second to Charlottetown’s Daniel Sprong in power play goals with six of Pierre-Luc’s nine goals coming on the man advantage.

As for next season, PLD will get every chance to make the Blue Jackets. His only options are Columbus or heading back to Blainville where he’ll be the Armada’s main offensive weapon. If back in the CHL, PLD should be a lock for a spot on the Canadian World Junior Team.

Keegan Kolesar-Seattle Thunderbirds (WHL Won Series 4-2 over Regina)
Series Stats 5GP 3-6-9 +2 10PIM
Final Playoff Stats 19GP 12-19-31 +12 37PIM
In the WHL Final, Keegan and the Tbirds faced off against the top team in the WHL, the Regina Pats. Keegan missed game one of the series after receiving a one-game suspension for an incident in game six of the Western Conference Final.

In game two, Keegan picked up an assist on Turner Ottenbreit’s second period goal to give the Birds a 2-1 lead but it didn’t make the highlights. The game went to overtime tied at three and Keegan helped a team pick up a win…just not the right team. Just under five minutes into overtime, Keegan earned a kneeing penalty for catching the Pats’ Connor Hobbs in the uh…lower body. Keegan went to the box and the Pats scored just 23 seconds into the power play giving the Pats a 4-3 game two win. The Pats probably thought Keegan should’ve earned a second suspension on the hit, but with Hobbs not being injured, the league really had no basis to look further.

In game three, Keegan was held pointless in a 3-2 game three loss that gave the Pats a 2-1 series lead.

Game four is when Keegan and the rest of the TBirds top line showed up even if they were split up. Starting off in the first after an early Pats goal, Keegan took a pass from Mathew Barzal before skating in and finding Ryan Gropp who made it 1-1. In the second period Keegan got the puck and skated into the zone before feathering a pass to Jared Tyszka. Tyszka hammered a shot to give Seattle a 4-1 lead. Late in the second, Keegan finished his big night when, off a draw, Donovan Neuls passed to Austin Strand at the point where he hammered a shot that was stopped. But the rebound went to Keegan where he fired home his 11th of the postseason. In the 6-1 TBirds win, Keegan was named first star. Here is the Seattle postgame press conference which Keegan was part of along with Head Coach Steve Konowalchuk and Rangers prospect Ryan Gropp.

Keegan continued his strong play in game five, starting in what would be a wild first six minutes of the game. As Seattle fans were still celebrating their first goal, Ethan Bear won a foot race and passed to Keegan along the wall. Keegan skated into the zone and started to drive the net where he passed to Mathew Barzal in the slot who snapped a shot to make it 2-2. Late in the second, with the Pats leading 3-2, Keegan and his linemates broke out in the neutral zone and skated in on a three on one. Keegan put himself in the circle and snapped a shot to tie the game at three. Here’s another angle of the goal, (watch the water bottle). In the third, Keegan did a lot of the work on Ryan Gropp’s goal. Keegan was the last man on the ice and got the puck deep and behind the net where Alexander True battled allowing Keegan to gather the puck and slow the game down. Kolesar skated just above the circle and found Gropp down low where he made it 6-3 in a 7-4 TBirds win. The match was also the TBirds last home game of the season, and the team did not technically name the three stars. Instead they honored the team’s 20 year olds and their fans, but if I had a vote, Keegan would’ve been first star.

Game six meant it was time to load the plane and fly back to Regina, Saskatchewan. And it looked like we were going to have a game seven with the Pats holding a 3-1 lead until Ryan Gropp scored to make it 3-2 and, then, Keegan would score to tie it. 2:28 after Gropp’s goal, with the Birds on the power play, Gropp passed to Ethan Bear at the middle point where he found Keegan at the circle who hammered a perfect one-timer to tie the game at three and send it to overtime. In overtime, Keegan set up Alexander True for the game winner when he dropped the puck to True who skated in and fired. He then picked up his own rebound for the score clinching Seattle their first WHL title in the Franchise’s 40 year history. Here is Keegan’s postgame interview.

In the WHL playoffs, Keegan finished in the top five in goals (tied for 3rd), assists (tied for 2nd) and +/- (5th) in addition to leading the playoffs in points and penalty minutes. Despite those honors, teammate Mathew Barzal was named MVP (I wasn’t given a vote).

This was the TBirds most successful playoff series and Keegan was a big part of it as was 16-year-old goalie Carl Stankowski. The netminder’s 16 wins currently stands as Seattle’s all-time high (I know it’s not CBJ related, just found it interesting). Back to Keegan. His 31 points is a new Seattle record for most points in a single playoffs and his 12 goals were tied for most in a playoff. In his four years in Seattle, Keegan made the playoffs each year collecting 48 points in 46 games which is currently third all-time.

Up next for the TBirds is the Memorial Cup which will take place in Windsor, Ontario. This makes seven of the last eight tournaments in which the CBJ have had at least one prospect participating. In the Memorial Cup, Seattle will face off against the QMJHL Champs, the Saint John Sea Dogs, the OHL Champion Erie Otters, and hosts the Windsor Spitfires who get an automatic bid.

It’s almost the end of the season for CBJ prospects. I’ll be back for a Memorial Cup recap and then we get to the fun part of the year… the Draft.