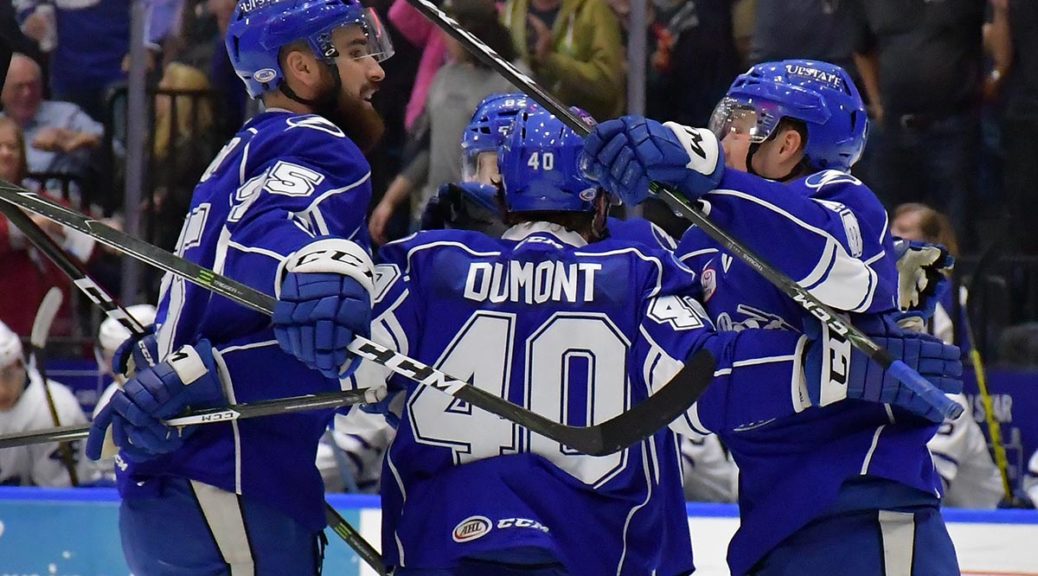 After being down two goals and staring elimination right in the eyes, the Syracuse Crunch shocked the Toronto Marlies and scored five straight goals to earn a trip to Providence, R.I. and the AHL’s Final Four for only the third time in franchise history.

The Crunch beat the Marlies 6-3 in Game 7 of the North Division finals last night at the War Memorial.

Syracuse tied the game at two in the second period and then ran off three goals in the third by Matthew Peca, Cory Conacher and Yanni Gourde.

The Crunch will open the best-of-seven Eastern Conference finals series Friday in Providence. The Bruins will have home ice in the 2-3-2 format series.

Goalie Mike McKenna faced only 17 shots and stopped 14. At one point, the stingy Syracuse defense held Toronto without a shot for 20 minutes.

“When we scored the tying goal, we thought the roof would explode. It was amazing,” Groulx said.

“You can’t go on a roller-coaster of emotions,” Cory Conacher said of the rally. “You’ve got to have an even keel. Actually, I had a pretty good feeling throughout the whole game. Obviously, maybe a couple bounces here and there didn’t go our way, and that’s why they got up there 3-1. But all the guys, especially the leadership group, brought these guys together and made sure we were on our game for the full 60 minutes. And that’s what it took tonight.”

Syracuse played Providence twice during the regular season with the home team winning a game apiece.

San Jose and Grand Rapids meet in the Western Conference finals with the winners playing for the coveted Calder Cup.