Cowboys Being Methodical with Collins Move to RT 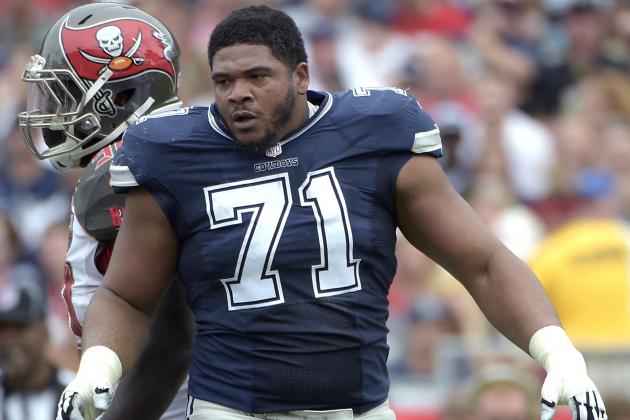 By now, you have heard the news of Dallas Cowboys Offensive Lineman, La’el Collins making the move from left guard to right tackle. This seems like a no brainer of a move, and I have full confidence that Collins will fill the void seamlessly.

So, the question is this though, Why not just let Chaz Green and Byron Bell battle it out for the right tackle position?

For me, it’s simple — it’s pedigree. Collins is a first round talent, and if want to get the best offensive lineman on the field, then Collins is a huge upgrade over the oft-injured Green and journey man Byron Bell.

But now we have a question mark at left guard, don’t we?

This is a legitimate question/concern and here’s where I’m saying the Cowboys are being methodical with this whole move.

With Collins no longer at LG, the stage is set for a battle royale between a substantial amount of players. We’re talking about Jonathan Cooper, Looney, Cleary, Theaker, Green, and Bell. When the dust settles, someone will have won the job.

However, if the Cowboys feel like none of these guys are going to be able to hold up at  LG, they could move Collins back to LG, and see who would be better at RT.

Lastly, if that above option is a not a good one, the Cowboys know they have compensatory picks coming their way for next year’s draft, so they conceivably use a mid-round pick and trade for a player. They have draft ammo to make a move if needed.

Remember, the Cowboys are gaining some cap space June 2nd with the Tony Romo release.

That money can be allocated to player extensions, rookies, and new acquisitions.

Let’s see how this thing plays out, but one thing is for sure, the Cowboys have thought about this months ahead of time, this is why they decided to skip on drafting an offensive lineman, and no additions were made in free agency. That can all change by the time we get through training camp and preseason roster cuts.