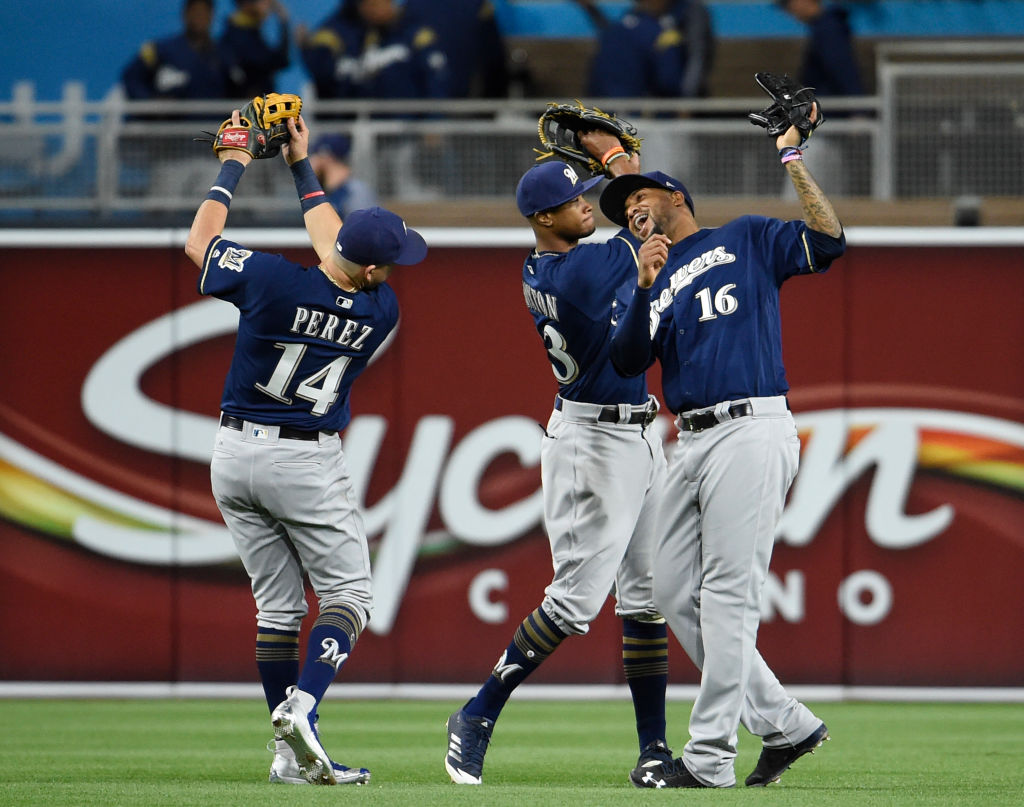 Each Monday evening (occasionally Tuesday) we will review our favorite and least favorite events of the previous week, and share our perspective on how the team is doing.  Please enjoy responsibly.

Brewers Find Themselves in First Place: After the last two seasons, most optimistic Brewers fans were probably expecting to them finish 2017 close to .500.  Not over .500.  But, say, 78 wins would be five more than last season and would be a sign that the rebuild is progressing.  Lo and behold, the Crew has already surprised us a couple times this year.  Last month they got over .500 for the first time since the end of 2014.  They’ve managed to maintain a winning record for two straight weeks.  They won a series against the goddamn Cardinals.  Then last week we got a real treat – the Brewers worked their way into first place in the NL Central, where they remain as of this writing.

The safe bet is that this is a fluke, like the Reds leading the division for a good chunk of April.  The Reds have reverted to form and fallen in the standings.  In all likelihood the Brewers will do the same, leaving the Cubs and goddamn Cardinals to play out 2017 as the real contenders.  But for now we might as well enjoy it while it lasts, and maybe even indulge in the fantasy that the Brewers will be buyers rather than sellers at the trade deadline.  Mmm, feels good, just like in mid-2014 when I was fantasizing about seeing a World Series at Miller Park.

Eric Sogard Lets His Daughter Down, Kaycee Sogard Lets America Down with Incorrect Camera Angle: The Brewers were this close to sweeping the Padres.  In the first game of the series, the day after the ridiculous Mother’s Day comeback, new Brewers hero Eric Sogard hit the go-ahead homer in the 10th inning, setting the stage for another amazing…dammit, the Padres won in the bottom of the inning.  A lot of us thought the Brewers had that one in the bag, including Sogard’s daughter Saydee.  Eric’s wife Kaycee Sogard captured their daughter’s heartbreak and memorialized it on Twitter.

Pretty much how we all felt last night. @EricSogard @Brewers @MLB @Cut4 pic.twitter.com/b0H7OIj3ux

In this age of social media, the video of Saydee’s adorable reaction became a mainstream story for a day, because America loves a little girl being disappointed in her father.  The story also highlighted another significant source of disappointment in America – the mistaken overuse of vertical pictures and videos.

In our crazy modern world, any event that becomes a major news story invariably includes bystander cellphone video.  Far too often that video is captured vertically, forcing us to endure that absurd letterboxing.  It’s hard to understate how spectacularly wrongheaded this is, and we all have a duty to do our part to educate our loved ones, and hopefully correct this appalling lack of judgment perpetrated by otherwise intelligent and sane people.

Not too long ago, TVs with a 16:9 horizontal aspect ratio became common.  When that happened, no one thought to themselves, “gosh, these TVs should really be standing up vertically.”  The human field of vision is naturally horizontal.  You’ve got peripheral vision (barring birth defect or injury, of course) and as such you’re always viewing what you know as life in horizontal fashion.  Therefore, horizontal pictures and video should always be the default mode.

There are a few instances when vertical orientation makes sense.  If you happen to meet Thon Maker on the street and he’s kind enough to take a picture with you, for example.  Or if you want new wallpaper for your phone.  Or…actually those are the only two instances.  Seriously, Thon Maker is tired of you always bothering him for selfies.

Corey Knebel: The only Brewers pitcher who hasn’t had a bad outing yet, the Brewers would probably have at least two more wins if Knebel had been in the closing role earlier.  Or maybe he’d have had three bad outings by now.  Who the hell knows?  But Knebel’s the closer now and the numbers don’t lie: 0.82 ERA, 1.045 WHIP, and 38 strikeouts in 22 innings of work.  He can do it with the blow away fastball…

…or with the knee-buckling curveball.

Knebel will surely blow a save at some point.  Until then, we’ll enjoy it while it lasts.

The Blue Jays come to Milwaukee to the complete the two-and-two series that started in Toronto last month.  At that time, the Brewers were starting their first road trip of the year and the Blue Jays were coming off a dismal 1-5 start to the season.  When the Brewers left, the Blue Jays were off to a 1-7 start and would finish the month of April with an 8-17 record.  Toronto has been playing .500 ball since then, and are still at the bottom of the AL East.  Two-game series tend to lack a certain sense of significance, but this one has Jose Bautista starting at third base for the first time in four years.  In other words, this series also lacks a sense of significance.

The Arizona Diamondbacks follow with a more consequential four games series, during which Brewers fans can squirm and gnash their teeth every time Paul Goldschmidt comes up to bat.  This f’ing guy is batting .500 at Miller Park with a 1.494 OPS.  That covers 76 plate appearances, so it’s no accident.  If Eric Thames still has any strep throat germs, maybe he could go the extra mile for his team and greet Goldschmidt during batting practice with a full kiss on the mouth.  Anything to make this guy uncomfortable at Miller Park…