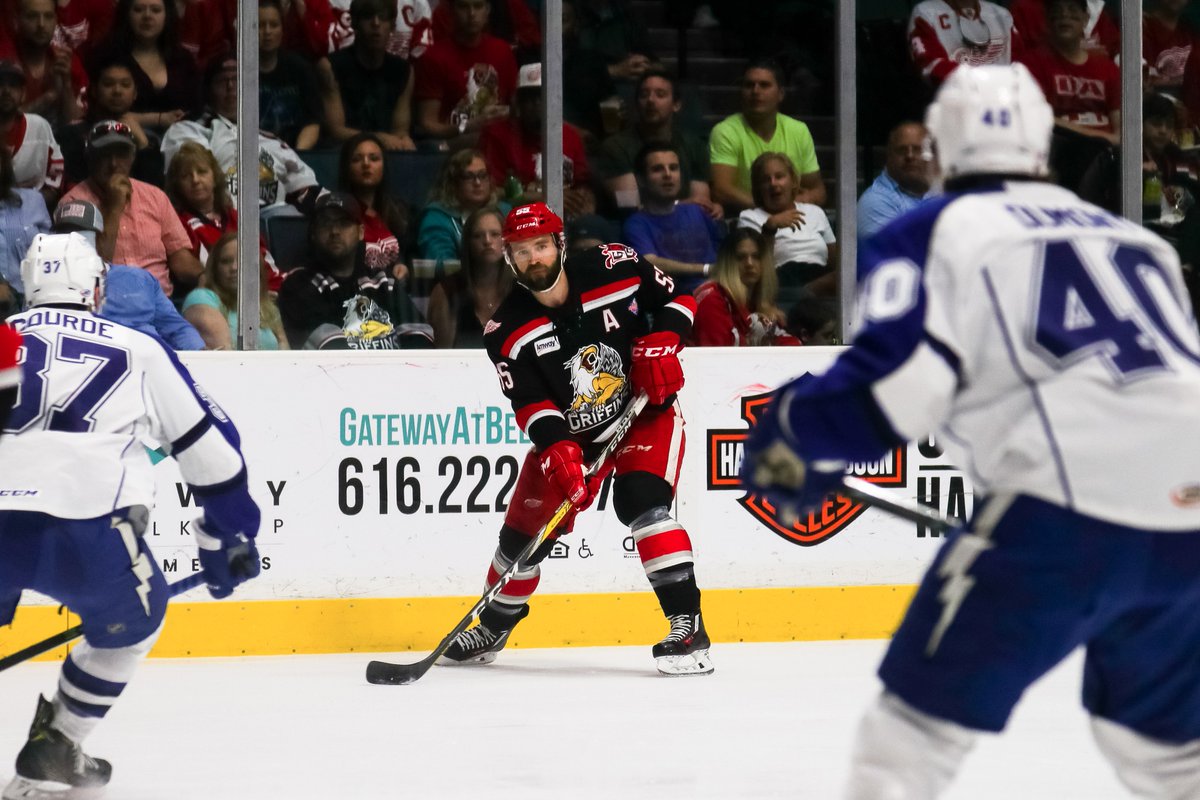 Ben Street‘s second goal of the night came at 7:02 of the second overtime to give the Grand Rapids Griffins a 6-5 win over the Syracuse Crunch Saturday at Van Andel Arena.

The Griffins now have a 2-0 series lead in the Calder Cup Final in the best-of-seven series.

Street added an assist for a three-point night, Martin Frk added a goal and two assists and Jared Coreau (13-2) made 21 of his 50 saves during sudden-death as Grand Rapids remained perfect at home this postseason.

The Griffins opened the Game 2 scoring at 5:27 of the first period with a power-play goal as Frk picked the top corner with a laser from the right-wing faceoff dot, his fourth goal of the playoffs.

Syracuse answered at 10:37 as Yanni Gourde netted his sixth goal of the postseason, skating down the right wing and chipping the puck past Coreau.

Street put the Griffins back up at 12:29 with his fifth goal of the playoffs, burying a rebound into an open cage after Mike McKenna‘s initial save off an Eric Tangradi shot.

Grand Rapids carried the 2-1 lead into the second period but the Crunch tied it up again at the 4:30 mark when Joel Vermin got around a defender and went backhand-to-forehand before slipping a shot past Coreau for his second goal of the series and seventh of the playoffs.

Just 71 seconds later, the Crunch took their first lead of Game 2 as captain Erik Condra drove to the net and put in the rebound of Matthew Peca‘s shot at 5:41.

The Griffins made it 3-3 with another power-play goal at 12:53. Frk sprung Mitch Callahan into the offensive zone with a long outlet pass, and Evgeny Svechnikov knocked in a rebound for his fifth goal of the playoffs.

Game 1 hero Tomas Nosek gave Grand Rapids a 4-3 lead just 24 seconds into the third, deflecting a shot by Street past McKenna for his 10th goal of the playoffs.

But Syracuse scored its first power-play goal in seven tries this series to tie it at 4-4 with 12:13 remaining, as Cory Conacher one-timed a feed from Gourde for his 10th postseason goal, re-tying Nosek for the league lead.

Tyler Bertuzzi gave Grand Rapids its fourth one-goal lead of the night with 6:24 to go, finishing a barrage of Griffins shots with a rocket from the left-wing dot, his seventh goal of the playoffs.

Byron Froese missed a chance to tie the game on a penalty shot with 5:07 to go, but the Crunch got the equalizer 22 seconds after when Michael Bournival scored his seventh of the playoffs.

Syracuse had several great chances in overtime, including a power play that spanned the two extra periods but leaves West Michigan without a win.

NOTES: Shots on goal were 55-51 in favor of Syracuse… This was the first double-overtime game in the Calder Cup Finals since 2005, when Patrick Sharp gave Philadelphia a 2-1 win over Chicago in Game 2 of that series… Attendance was 10,834, the Griffins’ first sellout of the postseason… Grand Rapids’ three power-play goals tied a franchise record for a single playoff game… The Griffins improved to 9-0 when scoring the game’s first goal, and 9-0 at home… The Crunch, 2-7 on the road in the playoffs, will take their own nine-game home winning streak into Game 3 on Wednesday. – (TheAHL.com)