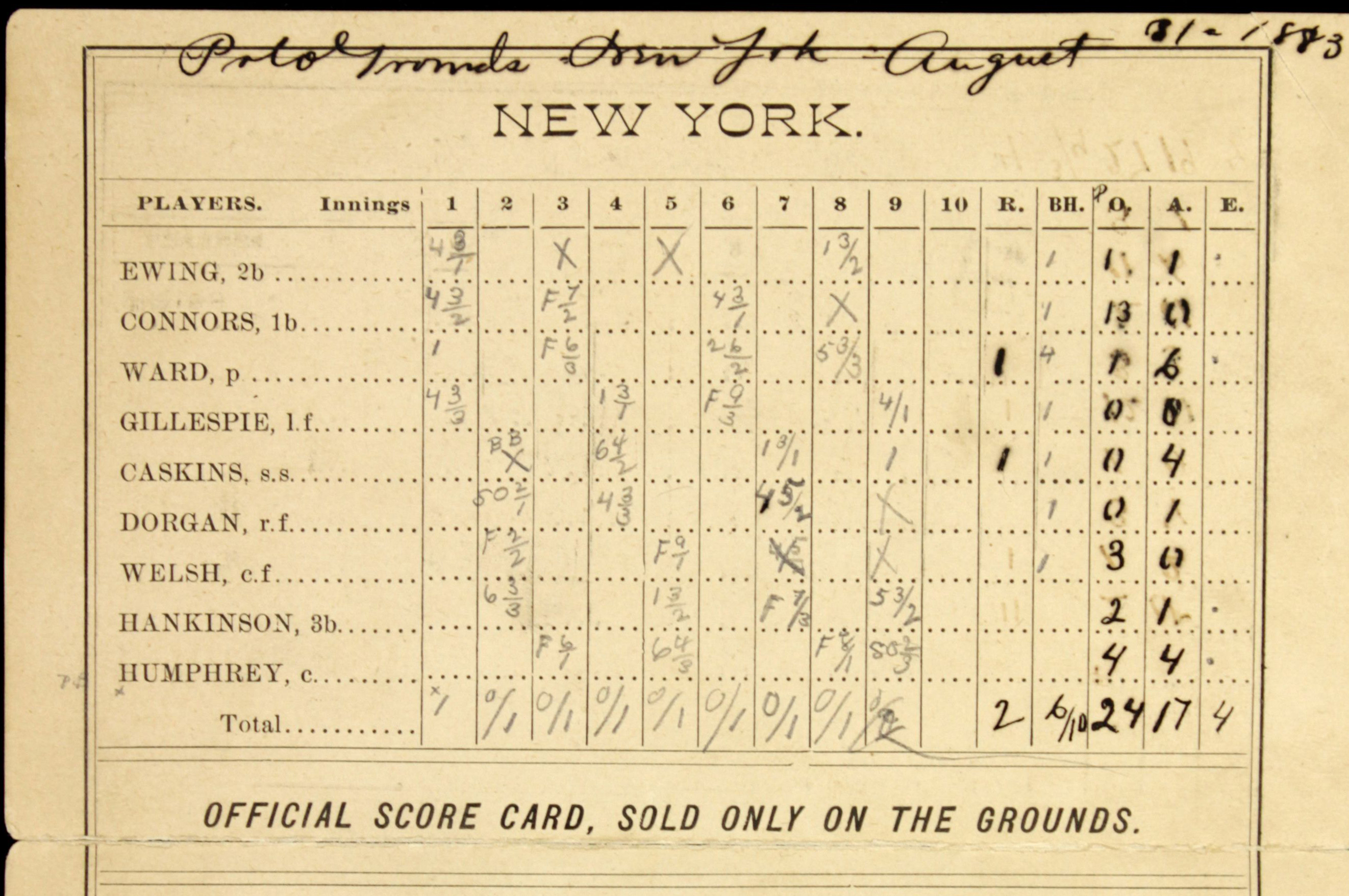 As we discussed last week, the New York Gothams began their first road trip in franchise history in the second week of the 1883 season. The road trip continued the week of May 18-25, with the Gothams struggling in the midst of an eight-game losing streak.

“When the New Yorks feel like startling the whole country with wonder and amazement they win a game of base ball.”

O’Neill stopped the losing streak with a sloppy 11-6 win over the Detroit Wolverines in Detroit on May 18. But on May 19, Welch could not keep the momentum going and lost 7-4 in Buffalo. The club took a few days to travel to Cleveland, where they began a series with the Cleveland Blues on May 24th.

“Sure Shot” Dunlap in a seductive pose.

And there’s a reason for that.

The Blues had a great team in 1883, led by 24-year-old slugger Fred “Sure Shot” Dunlap, who hit .326 and played a great second base. Dunlap was joined by 25-year-old shortstop “Pebbly” Jack Glasscock, with the most uncomfortably suggestive name this side of Rusty Kuntz.

The Dunlap and Glasscock duo would finish the 1883 season tied for sixth in the league with 4.5 WAR each.

Cleveland’s British born workhorse Jim McCormick battled injuries throughout 1883 but would lead the league in ERA, ERA+, and winning percentage. Righty Hugh Daily pitched in with 23 wins and 171 strikeouts. As a result, the Blues were in the pennant race until late in year and the future looked bright.

Hugh “One Arm” Daily of the Cleveland Blues.

Unfortunately, in 1884 a rival major league named the Union Association would poach Dunlap, Glasscock, McCormick and Daily from Cleveland, along with backup catcher Charles “Fatty” Briody.

No other club suffered such heavy losses from the Union Association’s pilfering. Major league baseball in Cleveland was decimated. The club fell to seventh place and abruptly folded in the offseason, selling off their remaining players to the Brooklyn Grays (now the Dodgers) before the start of the 1885 season.

Turning back to the Gotham’s 1883 season, Mickey Welch was on the mound again as he dueled the mercurial Hugh Daily. Now if you’ve heard of Daily it’s because of his famous nickname. He was a right-handed fireballer whose nickname was “One-Arm”. That was a bit of a misnomer as Daily was actually only missing his left hand after a gun accident blew it off when he was younger.

But newspapers lacked subtlety then, so he became known as “One Arm.”

In the days before baseball gloves, “One Arm” Daily used a special pad that he placed over the affected area and caught his catchers’ throws by trapping the baseball between the pad on his left hand and with his right hand.

Welcome to The Giants’ Cove, your home for the latest Giants news and the freshest Boy Meets World takes.

Minkus showing up to Cory’s house with a basketball for Abbott to sign is a top five moments in Boy Meets World history.

He was similar to Jim Abbott, the 1990s former Yankee and Angel left-hander, who was born without a right hand. Abbott also had a killer cameo on “Boy Meets World”.

Now you might know that Jim Abbott pitched a no-hitter for the Yankees on September 4, 1993. Amazingly, 110 years earlier almost to the day, Hugh “One Arm” Daily also pitched a no-hitter. On September 13, 1883, Daily bested the Philadelphia Phillies 1-0 allowing zero hits. It was the eighth no-hitter in National League history.

And it was Daily was who defeated New York’s “Smiling” Mickey Welch on May 24, 1883 in Cleveland. The Gothams fell 1-0, in what was a very strange game indeed.

In nine innings the Blues and Gothams combined for a ridiculous 16 errors. Though to be fair most players weren’t using gloves or mitts at that point. New York managed just two hits and the game’s only run scored when first baseman Roger Connor dropped an easy fly ball.

Daily was dominant and struck out 10 Gothams. The loss dropped their early season record to a dismal 4-10.

“One Arm” Daily was on the mound again the following day to face Johnny Ward. The game was described by the Cleveland Plain Dealer as a “stubborn contest.”

In the 14-inning game the Gothams went toe to toe with the Blues, eventually losing thanks to the dominating performances of “Sure Shot” Dunlap and “Pebbly” Jack Glasscock. They combined for eight hits, with Dunlap scoring the winning run in the bottom of the 14th on a base hit by Glasscock.

As the club’s first ever road trip finally ended, the Gothams were now 4-11, roundly defeated by a one-armed man and a Glasscock.

Thanks to Frank Vaccaro’s great biography of Hugh “One Arm” Daily for the Society of American Baseball Research.

Hall of Very Good 44m ago