Three takeaways from Game 2 of the NBA Finals 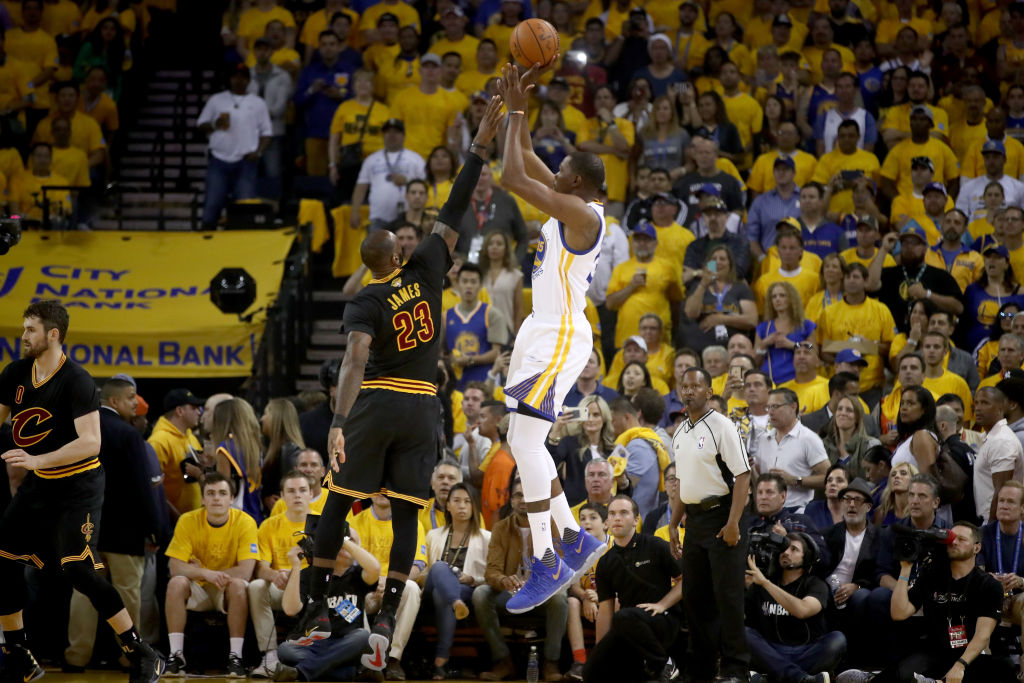 Three takeaways from Game 2 of the NBA Finals

On Sunday night, the Golden State Warriors defeated the Cleveland Cavaliers 132-113 in Game 2 of the 2017 NBA Finals, taking a commanding 2-0 series lead. Even though Cavaliers’ superstar LeBron James notched his eighth NBA Finals triple-double, tying him with Magic Johnson for the most in NBA Finals history, it was not enough to overcome the offensive firepower of the Warriors. Click to read.

Just like in Game 1, it was once again the Kevin Durant and Stephen Curry show.

1. Kevin Durant is on his way to potentially being named Finals MVP

After his phenomenal Game 1 performance, many people wondered what Kevin Durant would do for an encore performance in Game 2?

To answer that question, Durant did not disappoint on Sunday night as he put on a show on both sides of the ball. He scored 33 points on 13-of-22 from the field, along with 4-of-8 from three-point range. Not to mention, he also had 13 rebounds, six assists, five blocks, and three steals.

Durant stuffed the stat sheet across the board and was one of the main reasons why the Warriors were able to put Game 2 away in the second half, after only being up 67-64 at halftime.

If we look back at Durant’s performance from the first two games of the 2012 NBA Finals when he was with the Oklahoma City Thunder, his numbers are eerily similar to what he is doing in this year’s Finals. In Game 1 against Miami, he scored 36 points on 12-of-20 from the field and 4-of-8 from three-point range. Durant also had eight rebounds and four assists.

He then followed up that performance in Game 2 by scoring 32 points on 12-of-22 from the field and 4-of-10 from three-point range.

Nevertheless, Durant went on to average 30.6 points, 6.0 rebounds, and 2.2 assists in the 2012 NBA Finals. However, things look to be different this time around as Durant is on pace to shatter his personal best from 2012.

2. Klay Thompson may be back, which is good news for Golden State and bad news for Cleveland

After having a terrible Game 1 performance, where he only had six points on 3-of-15 shooting from the field, Klay Thompson needed to have a bounce back game on Sunday night. Despite his stellar perimeter defense, the Warriors needed Thompson to find his shot again and give them an extra offensive boost in Game 2.

Thompson did just that as he pitched in with 22 points and seven rebounds, plus knocked down 4-of-7 from three-point range. Give him credit though, Thompson is an outstanding shooter and when you are a shooter like him, you need to have a short memory.

A missed shot will not make or break you. Thompson was knocking down shots inside the arc, putting the ball on the floor, and dialing it up from distance.

The Warriors will need him to continue to shoot the ball like he did on Sunday night, especially if they want to win Game 3 on Wednesday night and take a commanding 3-0 series lead.

3. LeBron James is still the greatest player in the world, but he cannot do it all

Once again in the NBA Finals, LeBron James gave us another special performance. As I mentioned earlier, James posted his eighth NBA Finals triple-double consisting of 29 points, 14 rebounds, and 11 assists, but it was not enough.

Early in the game, James was playing like a man possessed. He was controlling the tempo, attacking the basket with force and tenacity, while also getting his teammates involved. He also threw down a powerful dunk on Andre Iguodala, who was at the wrong place at the wrong time.

However, James’ teammates could not reciprocate the favor and help him out. Just like in Game 1, J.R. Smith, who was an ex-factor in last year’s Finals has been a non-factor. On Sunday night, Smith had zero points, two rebounds, and four personal fouls. At this pace, Smith is averaging more personal fouls than points, which is not a recipe for success.

Tristan Thompson was moderately better in Game 2 posting eight points and four rebounds, after his no-show in Game 1. But for the Cavs to be successful, they need him to own the glass. Four rebounds will not cut it, especially when Curry had 10 by himself.

Finally, how could I forget Kyrie Irving? The guy who hit the game-winning shot over Curry in Game 7 of last year’s Finals and who will be on the cover of NBA 2K18. Through the first two games of this year’s Finals, Irving has been a no-show.

On Sunday night, Irving had unimpressive 19 points on 8-of-23 from the field and seven assists. He needs to play better. James cannot do it by himself.

Also, no one cannot blame Kevin Love this time around either. Love has played well throughout the first two games. He has done his job exceptionally, which is to score points and grab rebounds.

If the Cavs do not give James help in Game 3, they will most likely be looking at a 4-0 sweep on their home court.