NASCAR: JGR And Keselowski Comment On No. 18 Team Ahead Of Potential Penalties 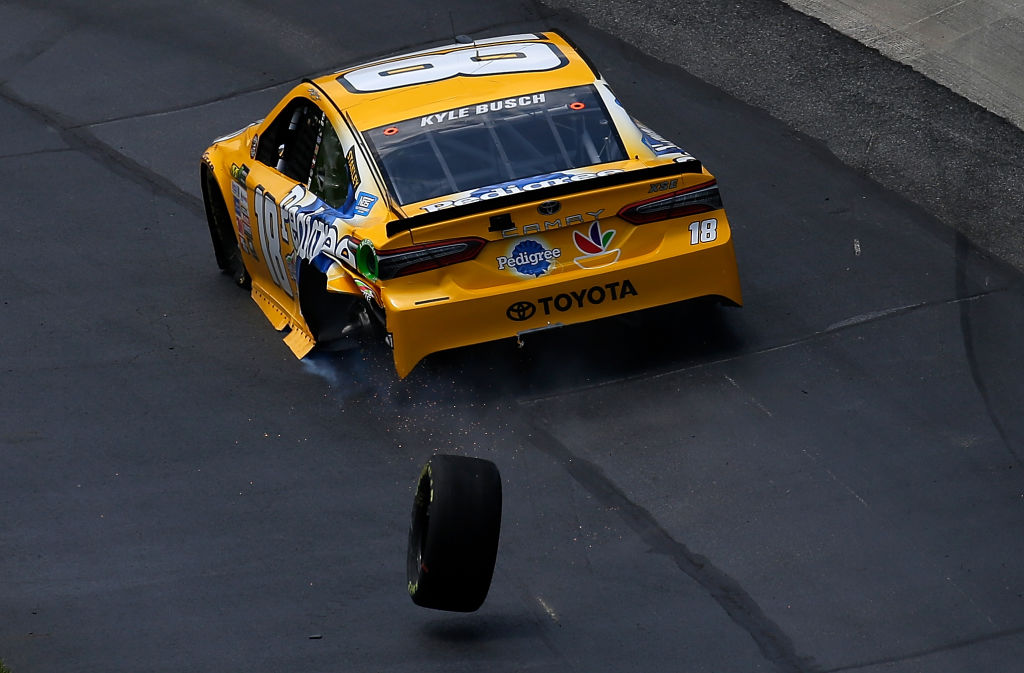 NASCAR: JGR And Keselowski Comment On No. 18 Team Ahead Of Potential Penalties

This past NASCAR weekend saw two instances in which a tire came off of a car (or truck) while on the track. On Wednesday, Kyle Busch and the No. 18 can expect to hear whether or not NASCAR is going to punish them.

Following a pit stop in the opening of last Sunday’s race in Dover, Kyle Busch lost the right rear tire of his No. 18 machine as he was getting back onto the track after pitting. The culprit behind the wheel coming off was that the air gun used to tighten the lug nuts was in reverse, causing the lugs to fall off instead of tighten.

While there doesn’t appear to be any intent here, NASCAR does have a rule in place to deal with such situations as tires coming off of cars is quite dangerous. According to the NASCAR rules book, the loss of the tire will result in a mandatory minimum four-race suspension for the crew chief, tire carrier and tire changer.

In the aftermath of the events of Dover, Joe Gibbs spoke about the incident and the potential penalties that could be handed down by NASCAR on Wednesday.

One thing’s for sure — we were trying to get the lug nuts on there, but we didn’t and the jack got dropped. We’ll just explain to them exactly what happened and see what they say. Obviously, the rulebook, what we’re trying to prevent, is somebody going with less lug nuts. That certainly wasn’t our case. We were trying to get them on. Anytime you (could potentially) lose Adam Stevens, that’s a big deal for us. You lose your crew chief, that would be a huge deal. All of [those guys are] big. That’s a huge penalty.

Brad Keselowski, one of Busch’s least favorite people also spoke about the issue this week. Keselowksi’s driver (Chase Briscoe) also had a tired come off this weekend in Dover, his happened during the Truck Series race. Keselowski spoke about how the rule might not have been intended for the situation that his team and JGR are in currently.

The current penalty is probably not the right fit for the situation, and maybe it will give NASCAR another day … and see that the rule is created for something intentional to happen, not for something accidental to happen — and that will give NASCAR another chance to look at it and think about it. Maybe that’s good, maybe that’s bad [that Busch had the issue]. I don’t know. I think [the rule] definitely could use a little sharpening with the pencil.

While NASCAR does occasionally announce penalties on Tuesday’s, this decision will most likely come down on Wednesday. How do you think NASCAR should handle the situation?