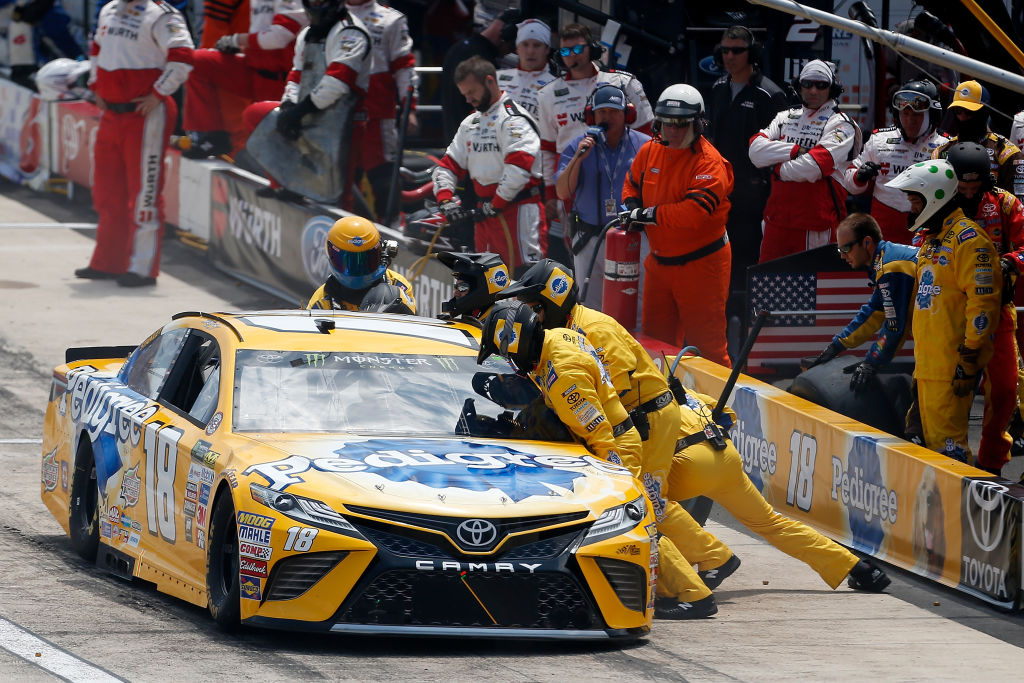 Over the weekend a pair of teams (Truck Series and Cup Series) had a tire come off while not on pit road. On Wednesday, NASCAR addressed the incidents the only way they could, by penalizing both teams.

Chase Briscoe and 2015 NASCAR champion Kyle Busch both had an interesting weekend this past weekend in Dover. Both drivers experienced situations in which the tires came off of their cars. Both incidents were unintentional, in the case of Busch it was an air gun set in reverse that allowed for five lug nuts to be knocked off their studs instead of tightened during a pit stop.

While both incident were an accident, NASCAR still came down hard on both teams on Wednesday. Both teams saw their crew chief, tire changer and tire carrier suspended for the next four races. The four-race suspension is the minimum punishment described in the NASCAR rules book for a situation in which tires are coming off of cars.

Although fans of the No. 18 machine might be up in arms about the punishment, they need to understand that NASCAR simply didn’t have another option. Sure, one could argue intent here. One could argue that the air gun malfunctioned and there is no way the No. 18 team was trying to send their driver out there with a wheel that wasn’t attached. Heck, I for one completely believe that’s exactly what happened but I also believe that it simply doesn’t matter.

Tires coming off of cars is a serious safety issue, which is why the penalty is as severe as it is. The penalty was put into place after NASCAR stopped monitoring lug nuts on pit stops. In theory it was NASCAR saying, ‘we aren’t going to watch you properly secure the tire, but if you don’t and it comes off, we are going to punish you severely for it.’ On Sunday the No. 18 team didn’t properly secure it and as a result they were punished.

NASCAR cannot sit here when it comes to tires coming off of cars and split hairs in an effort to figure out intent. When it comes to something as serious as this, there shouldn’t be any sort of grey area and on Wednesday NASCAR made it clear that a grey area doesn’t exist. Sometimes mistakes happen, sometime accidents happen, sometimes rules are broken when those who break them aren’t trying to do so. While it’s okay to understand why something happened, it’s not okay to excuse the consequences. Fans of the No. 18 team are allowed to be upset that it happened but that doesn’t mean the penalty isn’t deserved.

NASCAR set the bar high in terms of punishment in this situation for a reason. On Wednesday when it came time to hand out the penalties, their hands were tied and that’s okay.