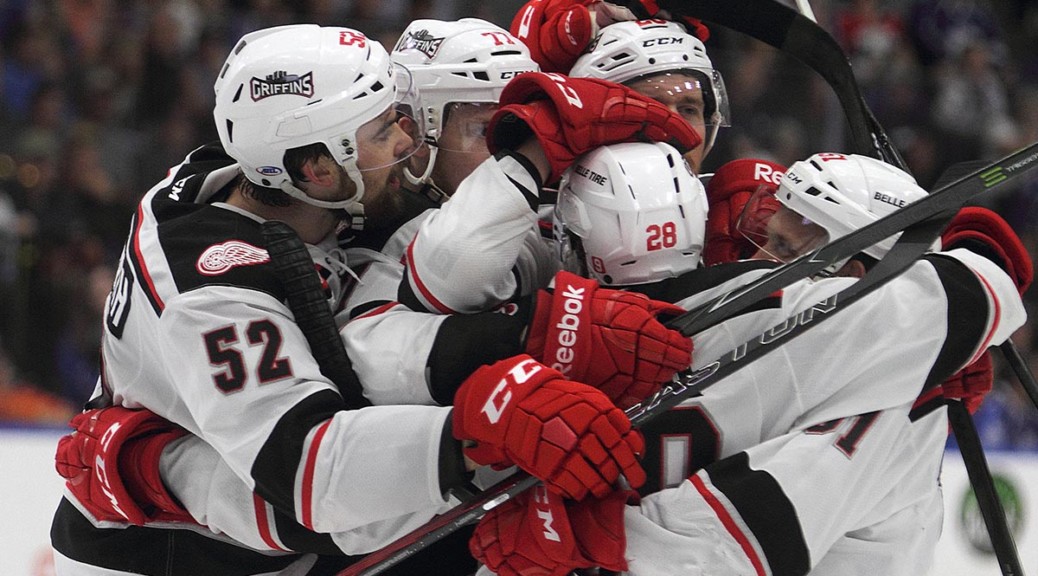 Dan Renouf was the unlikely offensive hero as Grand Rapids moved to within one win of a championship with a 3-2 victory over Syracuse in Game 4 of the Calder Cup Finals on Friday night.

Holding a 3-1 series lead, the Griffins can capture their second Calder Cup in five years with another win in Game 5 on Saturday night at Syracuse (7 p.m. ET, AHL Live, SiriusXM 91).

Renouf, a rookie defenseman out of the University of Maine, scored twice in Game 4 as the Griffins snapped the Crunch’s 10-game home winning streak in front of a standing-room-only crowd at the Onondaga County War Memorial Arena.

Grand Rapids weathered an early Syracuse storm — the Crunch had a 6-1 lead in shots just over three minutes into the game — and got on the board first at the 10:00 mark of the opening period when Ben Street knocked in a rebound for his third goal of the series and seventh of the postseason.

The Griffins doubled their lead with 2:12 left in the first when Renouf intercepted a clearing attempt at the left point and fired a long shot past Mike McKenna (32 saves). It was Renouf’s first goal of the playoffs and first in his last 31 games.

Renouf made it 3-0 for the Griffins at 10:33 of the second period, trailing on an odd-man rush and snapping a shot from the hash marks past McKenna. Renouf’s second goal of the night came after he had scored once in his previous 54 contests.

The Crunch finally got on the board with 8:15 remaining in the middle period as Yanni Gourde beat Jared Coreau (31 saves) from in close for his second goal of the Finals and seventh of the playoffs.

Syracuse closed to within 3-2 with 12:31 left in regulation as Michael Bournival raced past a Griffins defender to get to a loose puck and chip a shot past Coreau for his second goal of the series and eighth of the postseason.

The Crunch pressed for the tie, killing off a 5-on-3 Griffins power play late before picking up their own man advantage and skating 6-on-4 in the game’s final minute. But Grand Rapids prevailed, and now sits on the brink of a title.