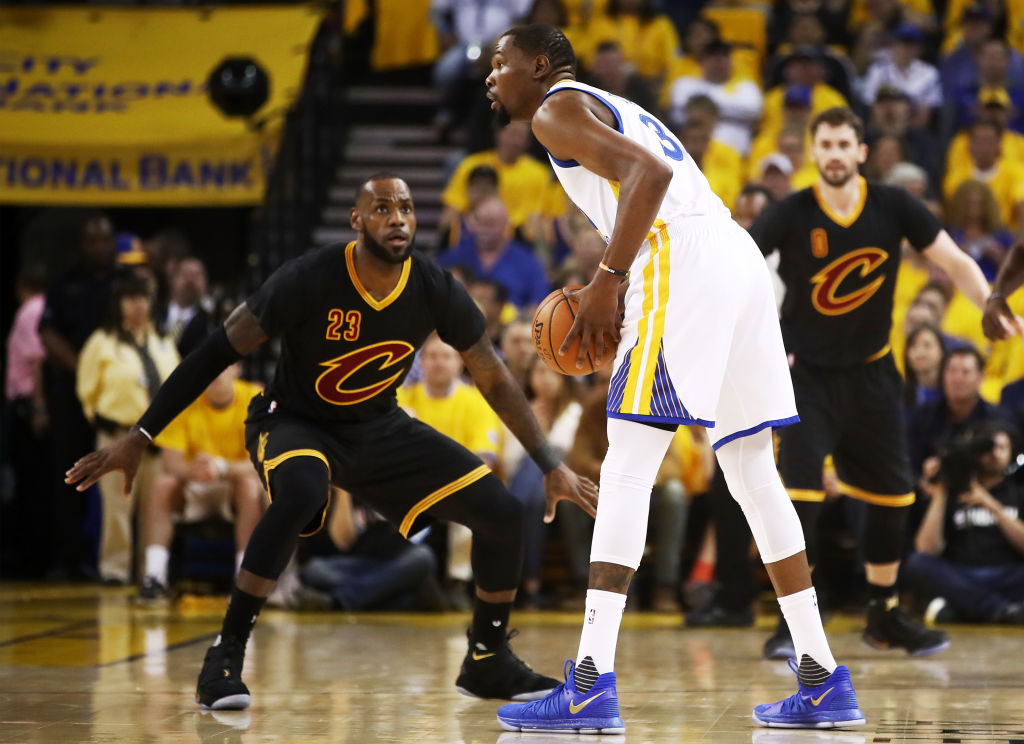 Golden State Warriors fans cannot celebrate yet. The Cleveland Cavaliers are not dead yet. A 137-116 defeat in Cleveland forced the Warriors to return home for another chance to seal their fate as the 2017 NBA Champs.

Now, the series is 3-1 in favor of the Warriors. Last year, Cleveland put together a series win after trailing by the same deficit. However, the Cavs had to beat the Warriors three consecutive times in 2016. This year, Golden State would need to drop four games in a row for Cleveland to steal the series. It is an unlikely feat considering the Warriors barely lost their first postseason game in Game 4 on June 9.

Outside of Game 3, none of the other contests were competitive. The Warriors blew out the Cavs in the first two games while Cleveland blew out Golden State in Game 4. What can we expect in Monday’s game which tips off at 6 p.m. PST?

How the Warriors can end the NBA Finals in Game Five

Klay Thompson and Steph Curry combined for 27 points in Game 4. That cannot happen again in Game 5. Kevin Durant needs help from the group that many consider as the best backcourt in the entire NBA.

Draymond Green has to continue stuffing the boxscore. He also needs to stay level-headed to keep out of foul trouble. Green must also maintain the enforcer role versus a physical Cleveland team that woke up in the last two games.

Nonetheless, the Cavaliers won the game because they were able to score the ball at a record rate. They hit a record amount of three-pointers and it is logical to assume that they will not do that again on the road.

Either way, Golden State needs to clamp down on the defensive side of the ball. They also need more than 4 points, 1 rebound and 1 assist from Andre Iguodala. Iggy has been one of the biggest sparks for this Warriors team over the past two Finals series. Golden State needs him to help to guard LeBron James but they also need Iggy on the offensive side of the ball. At home, Iguodala can provide the added firepower that will help the Warriors end the Cavaliers’ season.

How the Golden State goes back to Cleveland for Game Six

The Cavaliers made an NBA Finals record 24 3-pointers in Game 4 while shooting over 50% from downtown. pic.twitter.com/ZqoFVHJn0b

It does not take a genius to tell you that the Cavaliers came out as the more physical team in Game 4. Warriors head coach Steve Kerr said as much after the first loss of the series, per NBA.com.

We saw LeBron James got chippy with Durant and Tristan Thompson did not back down from Green in Game 4. The Warriors must match that intensity on their home floor in Game 5 or they risk returning to Cleveland for Game 6.

Moreover, the Cavaliers saw a new commitment to defending and attacking the rim for both games in Cleveland. In Game 5, the Cavaliers set NBA Finals records for points in the first quarter and first half. This means Golden State must get committed on the defensive side again. Golden State is among the league’s elite defensive teams and they must prove that again in Game 5. The Warriors cannot surrender 12 free throw attempts in the first quarter. They can not allow the Cavs to convert 24 three-point shots in 45 attempts.

Further, the Cavs role players saw their best series. Thompson registered 10 rebounds, J.R. Smith hit 5 three-pointers, and Richard Jefferson and Iman Shumpert gave valuable defensive minutes. Golden State can not allow Thompson to impact possessions with his rebounding. Meanwhile, they have to attack Smith on defense. They also have to make Jefferson and Shumpert beat them on offense.

Ultimately, it is challenging to contain James and Kyrie Irving. James registered a triple-double and Irving dropped 40 points. Kevin Love also added 23 points. Golden State has done a fairly good job making the Cavs Big-3 work for opportunities. However, they cannot let the role players defeat them in Oracle.

If the Golden State Warriors do not recommit to defense for Game 5 at home, they could be staring at Cleveland team that returns home for a chance to even the series at 3-3.

Do you think the Warriors can close out the Cavs in Game 5?