You're a good man, Marc-Andre Fleury 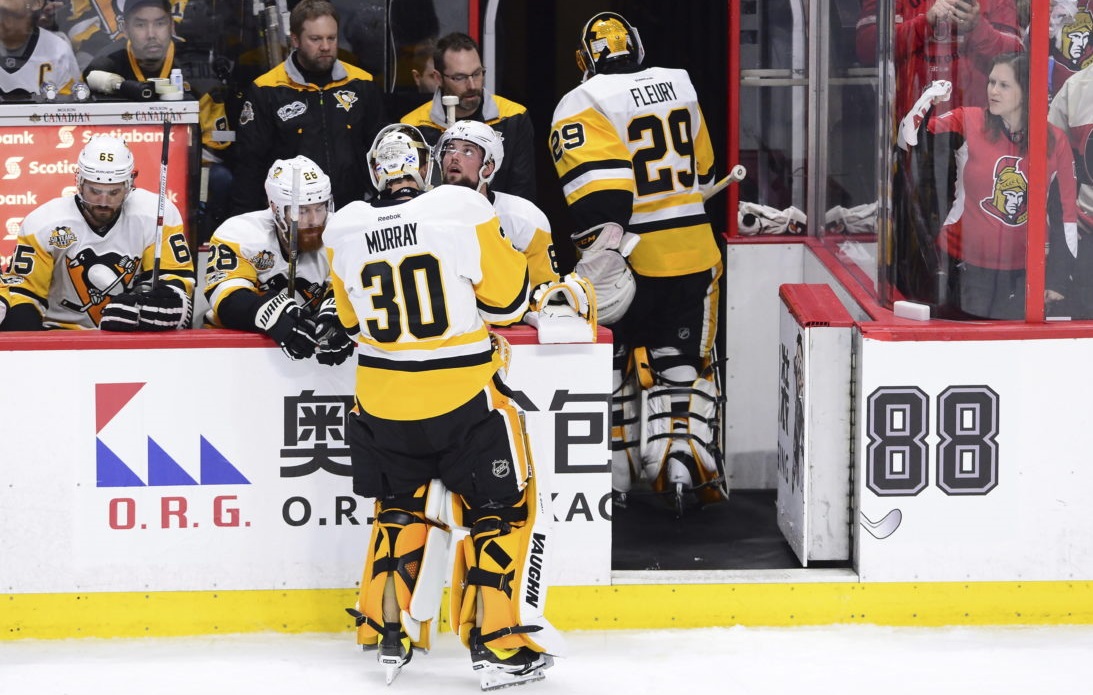 You're a good man, Marc-Andre Fleury

This past Sunday evening, the only man to appear in 13 consecutive seasons in a Penguins uniform, found himself back in the same building where he began his career. As he hoisted the Stanley Cup for the third time, did he think back to June 21, 2003 when he sat in the arena seats in Nashville as an 18-year old prospect? That day, for the first time since drafting Mario Lemieux, Pittsburgh held the first overall selection in the NHL Draft. Craig Patrick called out the name of Marc-Andre Fleury and a relationship between a city and a goaltender began.

Next Wednesday, on the exact 14th anniversary of his draft date, that relationship will end in a most cold, impersonal and business-like manner when the Vegas Golden Knights will almost certainly take Fleury away from Pittsburgh in the expansion draft.

Many will remember Fleury’s on-ice legacy: youngest goalie to play for the Penguins; his 24 saves in overtime to stave off elimination in the “Petr Sykora Game” in Detroit; Game 7 glove save on Alex Ovechkin & Game 7 horizontal diving save on Nicklas Lidstrom to win the 2009 Cup; another Game 7 win in Washington this spring.

Yet the frozen moment we should all consider archiving in our minds is when Fleury, without hesitation, sought out Matt Murray on the ice after Sunday’s game, to hand him the Stanley Cup. For a man who knows his time is winding up in Pittsburgh – the tears that flowed during Wednesday’s parade and yesterday’s exit interviews confirmed it – personally giving the ultimate trophy to your successor is the ultimate gesture of class and professionalism.

And that is the endearing quality of Marc-Andre Fleury. Beyond the highs and lows of his performance as a goaltender, Fleury’s sojourn through Pittsburgh should always be remembered for his gracefulness in handling success and accountability to take responsibility for his failures.

After his lowest moments – the twin playoff meltdowns against Philadelphia and the Islanders – the resuscitation of Fleury’s career began the revelation of his character. Sure, everyone knew him as ever-smiling, level-headed and always-approachable, but it was his acceptance of sports psychology counselling off the ice and advice from new goalie coach Mike Bales on the ice that turned things around for Fleury and showed that even as a veteran, he had the humility to listen and the willingness to persevere and improve.

Through all his very public adversity, he never lashed out at media or fans and never made excuses for his sub-par performances.

By last spring, when Matt Murray emerged suddenly as the Penguins goalie of the present and future, Fleury once again found himself benched in the playoffs then relegated to back-up duty this past regular season. Still, there was no whining nor thinly-veiled griping against the coaches about losing the top job to the younger, better goaltender. For Fleury, his actions demonstrated that the team comes first.

This past Monday, we also found out that Fleury helped the franchise avert a crisis heading into the trade deadline when he waived his No-Movement Clause for the purpose of the expansion draft. By doing so, the Pens could protect Murray from Vegas. Had Fleury not done so, the team would have had to deal the veteran netminder instead of protecting him (and assuredly losing Murray). The team comes first.

Marc-André Fleury accepted the Penguins request in February to waive his no move clause for the expansion draft. Only for Las Vegas.

When Murray was injured for the first two rounds of this year’s playoffs, Fleury dutifully answered the call and turned in his best playoff performance since 2008, shutting down Columbus, then gutted out a tough seven-game battle with Washington on wits and guile, winning the deciding game on the road with a shutout.

With Murray healthy and reinstated as the Penguins #1 goaltender, Fleury stepped aside without complaint. A team chasing a Cup needed no distractions and while media tried to drum up a goalie controversy, in reality, there wasn’t one in Pittsburgh. As Pensblog Rich wrote on Monday after the Pens won the Cup:

“They don’t make it here without Fleury. They don’t win this game, and ultimately the Cup, without Murray. This moment made all of the bitching and moaning over who should start so completely obsolete. The answer all along was they need them both, from the very beginning of the season to its absolute end.”

Having two #1 goalies during the playoffs was a luxury that worked because both goalies bought in. It’s not as easy as it sounds. Think about how the Penguins season might have turned out if Fleury and Murray bungled their job-sharing situation like Roberto Luongo and Cory Schneider in Vancouver a few years ago. What if Fleury was a hothead who made everyone nervous by smashing his stick against the boards every time he got pulled like Tuukka Rask? What if Fleury, with all the sudden down-time, started reading the wrong books and turned into a psycho like Tim Thomas, writing pro-Quebec separatist, anti-government manifestos?

Thankfully, it didn’t turn out that way because Fleury carried himself with dignity right to the end as a good teammate, willing to put club goals ahead of his own pride, over and over again.

Take the Penguins players’ word for it. For their internal team awards. Fleury was named team MVP twice (2011, 2015) and for the third straight season (2015-2017), was named the Player’s Player Award winner by his teammates “for the player they feel exemplifies leadership for the team both on and off the ice, and a player who is dedicated to teamwork.”

When Fleury was asked yesterday what he’ll miss the most about Pittsburgh, he seemed overwhelmed at trying to distill 14 years into a few words. “… Everything…” he finally said. Likewise, we will miss everything you contributed to Pittsburgh Penguins hockey.