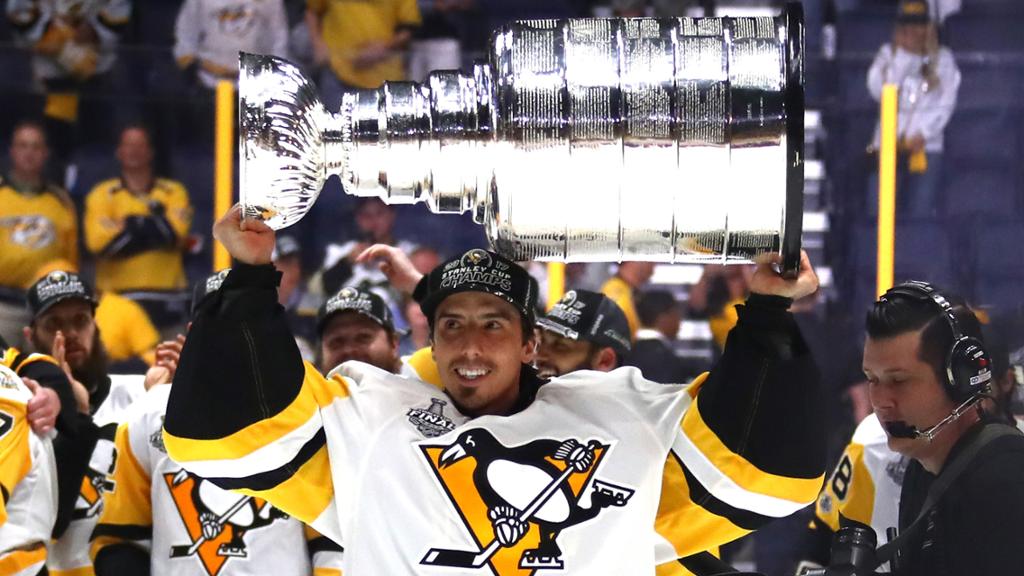 Two days from now, June 21st, the NHL Awards take place. During those awards, the expansion draft picks for the Vegas Golden Knights are announced to the public. It seems more likely than not that the Golden Knights are drafting, from the Pittsburgh Penguins’ unprotected players list, goaltender Marc-André Fleury. As of now, June 19th, Marc-André Fleury is the longest tenured Penguin on the team, being with them since he was drafted 1st overall by the Pittsburgh Penguins in Nashville, Tennessee in 2003. Fitting that his last year with the team was lifting Lord Stanley’s Cup in Nashville.

For an unsurprisingly large amount of people, “Flower” was and currently is their favorite Penguin. Mine included. So I asked on Twitter what their favorite memory of Marc-André Fleury as a Pittsburgh Penguin was. Here are their answers:

Chet (@MouseRat_Fan): His save against Erik Karlsson.

Zesty The Fool™ (@armadillorollup): When he murdered Dan Potash.

PensAreYourDaddy (@PensRyourDaddy): Nov 14, 2009 game against Boston. He didn’t start and spent the game putting his gum wrappers in the hair of photog Greg Shamus.

chris ⭐️ ✌️‏ (@saltymcdavo): Doing a cartwheel on ice during practice, gracefully falling, and then catching the puck in his glove as he fell.

ava (@bersatrix): Him jerking off his stick after stopping that Ovechkin shot in game 7 i think of series 2.

(@genois100): When Sid was talking abt exercising and the cameraman focuses past Sid and we see Flower hula hooping in the background and walks away when it fell.

Another Pens Fan (@pensfan8714): I loved his handshake with Tanger that he did after a win.

haley (@22htate): “i squeeze it with my ass cheeks!” and when i think it was Sid was doing exercises and flower was hula hooping in the background lol, and him and Tanger’s handshake.

Ride Or Die Daley (@42bottlesofbeer): Him calling Lundqvist flipping the net “baby stuff”, him pranking people by climbing into their hockey bags to jump out at them.

Daniel™ (@Xerone): His smile is just so great and you can always see it, even under his mask.

Bioshock (@BioshockLGP): Every time he makes a huge save and you can see him smiling through his mask.

SpringTindi (@Tindi): “POKE CHECK!” and “WHEEE” are high up there, but the smile got me first. Things got crazier and more intense and Flower’s grin got bigger.

Pens91.92.09.16.17 (@burghforever87): Him and Max before each game. Always thanking his posts. His smile when he makes a save. Fleury and Crosby sitting together on the plane.

Pensstan (@trubluePensfan): His smile and great personality the way he could walk into a room and lighten the mood . Everything just everything.

Repeat Champs (@fleurychants): The way he smiles at everything even if there’s nothing to smile about, and the fact that he never says anything bad about anyone.

back 2 back binches (@keplermax): He was back in net for the first time in a while & I told how nice it was to see him in net again and he smiled & it was the best moment.

87 babe (@crocby87): How he kisses and thanks his posts. That save on Ovi in G7. Being in net for Sid’s 1k. His athletic saves. His smile after a good save.

Jake Higgins (jhiggins2987): Met him for the second time in 2012 and bowled with him. He threw his ball into Jordan Staal and Geno’s lane and couldn’t stop smiling.

ashlee (@nhltierney): Having him smile and laugh at me as i look at him in total amazement for how close i was to him at the YCP game.

Amanda (@29BurghLove87): When I went to Pittsburgh, made a sign that said “from Seattle to Pittsburgh for a picture with Fleury” and he gave me a puck.

Ben (@BenDeGori): Breakaway save vs Ovechkin in game 7 of 09.

Niklas, The Penguin (@Geno_71): Game 6-7 against Red Wings 2009. The redemption story. Being down 3-2 yet another year, the fans were behind him and Fleury showed us the way.

Wendy Bishop (@wendbish): Last save in GM 7 in Detroit.

Hunter (@HunterHodies): SSave on Lidstrom in 09 by far. Saved the game.

BACK TO BACK BOYS (@tictacbergerac): When Murray let in four in the first, Fleury went in and shut out the other team and we won 7-4.

vulpine vanguard (@TovarishchLisa): Watching him grow up in Wilkes-Barre.

Stephanie U (@StephanieU8719): Yelling “you fucking fuckface” to Staal (?) at practice for 2011 winter classic. Apologizing to parents/kids for cursing @ 2009 parade.

Stuti (@stuti_rt): the time he clotheslined Phil Kessel (lol) and the ridiculous cartwheels he does before the game in full equipment.

jillian (@dtjamesford): When they used to do mustache boy and he would chirp the guys so hard.

Brett Trithart (@trithart_): Him tripping coming out of the tunnels for game one of SCF in 2008 is the funniest. Favorite? This playoff run for him

YAN, just Yan (@tweetniyan): Every single prank he did with either Pascal and Tanger, but most importantly how he welcomes the new guys. OMG I’m tearing up!

Jamison (jtgensler): Probably the shenanigans he used to do during practice shootout drills. Push-ups while making saves etc… and those yellow pads 🙂

Anna-G (@PensGirl2987): Have him come to Pittsburgh a boy and watching him grow into an amazing man! Fav memory-his 2017 playoff run! He kept us in it!

Ally M W (@nametags): His commercial with his wife and daughters.

shlee (@horseshitcall): his banana pads. spinning like a ballerina. 2009 cup run & the Save. trying to fight budaj. “Do you have a penis ring?” his perpetual smile.

resilience™ (@jakobschychrun): Him trying to get into a fight with Peter Budaj(?) but being intercepted by the refs with a big smile on his face.

Frank Falotico (@Apomov): Crossing his arms back at the Montreal goaltender.

CHAMPS (REPRISE) (@imlittlebitdie): Him thanking his posts/crossbar/stick when they make big saves for him.

bossy ice nerd (@lovethygoalies): Someone else already said this but definitely the way he thanks his posts after big saves. That or that he’s the team prankster.

alix (@freckledbutt): Him thanking the goal posts. This last playoff run. The way he always has a smile.

We all love you, Flower. We’ll all miss you. Go make us proud.