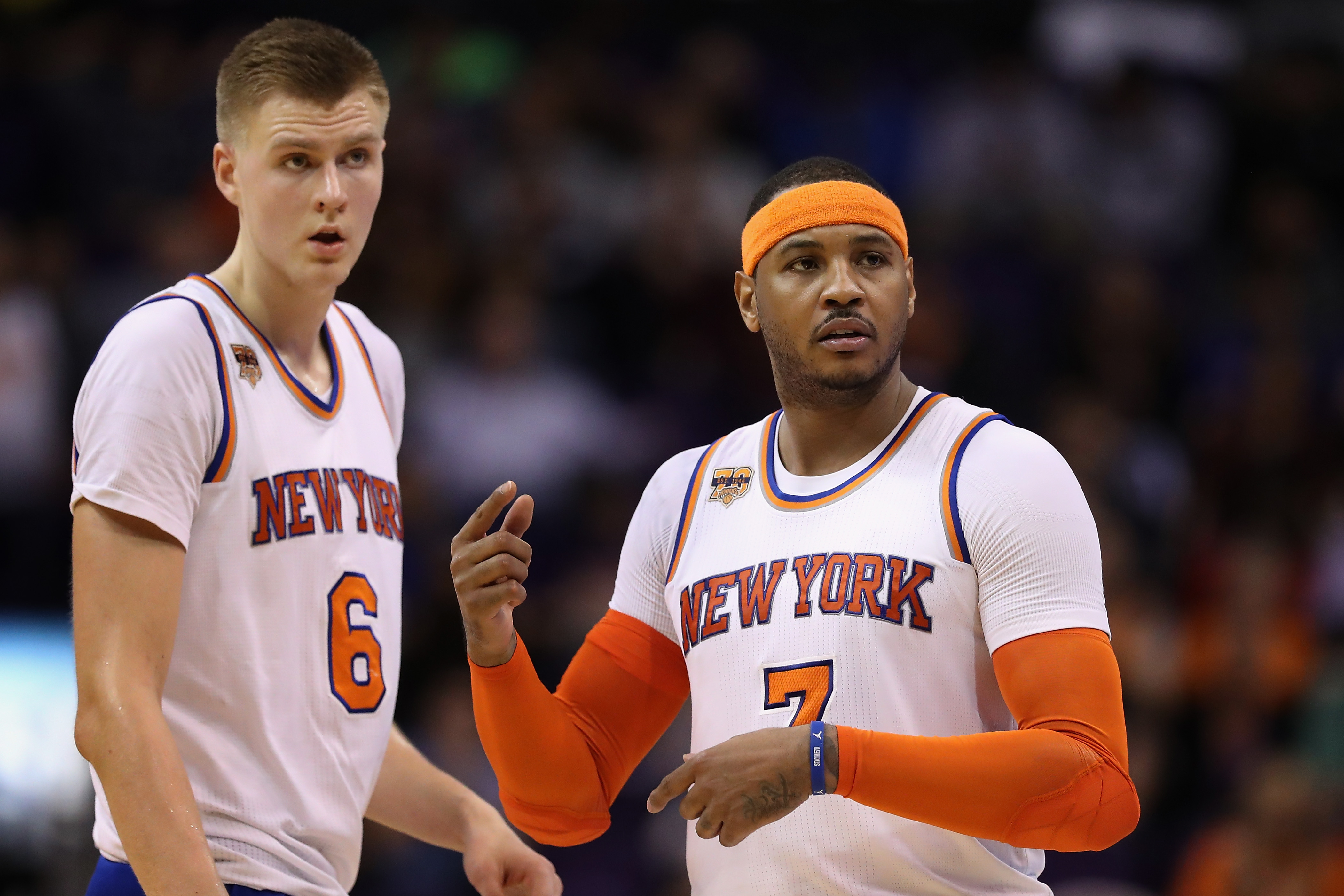 The NBA offseason hasn’t even really begun in earnest, but it’s already approaching the point of lunacy. The top overall pick in the draft, with a consensus top pick waiting to be selected, was traded by our own Boston Celtics. Almost immediately after that, Paul George let Indiana know he’s leaving one way or another. Now comes word that the Knicks, in all their glorious stupidity, would be willing to trade Kristaps Porzingis.

Phil Jackson is such an egomaniac that he’ll trade away a ridiculously good, ridiculously unique player built to thrive in today’s NBA. But Phil insists on force feeding the triangle to non-triangle personnel instead of letting his coaches use the players’ strong suits to run an offense that works.

So PJax has now set up a toxic situation that pissed off his budding young star. Porzingis went home to Latvia without speaking to the Knicks, which has apparently pissed off his high-ness to a point that he’ll cut off the nose to spite the Knicks’ face. This all despite having Porzingis completely under control for AT LEAST the next three seasons, and that’s just a worst-case scenario under which Porzingis signs an offer sheet from New York to become an unrestricted free agent.

That brings us to today, where the Knicks are fielding offers for what will be an undoubtedly complicated trade because Porzingis’ talent far outweighs his rookie contract. This leaves a few scenarios:

Multi-team trades are hard and I don’t have any faith in Jackson to make that happen. Any team taking on Melo would be a desperate sort of fringe contender (like the Clippers). But if the Clippers could join forces with someone with assets, like the Suns, Timberwolves, or… your Boston Celtics… they could maybe, possibly, swing a 3-team deal where Melo finds his way to the Clippers, Porzingis goes the third team, and the Knicks reap some combination of rewards from the other teams.

Again, that’s complicated. It’s also stupid because Porzingis is exactly the kind of young player you’d want on a rebuilding team. I’d be shocked if Phil swings a blockbuster like this that ends up working out in the Knicks favor. However, if Boston can swoop in and cash in on this mix of bravado and desperation, then I’m all for it.

According to multiple sources in Cleveland, not only have Cavaliers players – including LeBron James and Kyrie Irving – been reaching out to Butler directly and through back channels over the last five days to gauge his interest, but those players liked what they heard back from the Bulls’ three-time All-Star.

One of the sources indicated that Butler would even push his front office to get the deal done, which is a huge change of direction for Butler, who has told both general manager Gar Forman and vice president of basketball operations John Paxson numerous times over the last year that he didn’t want to be traded.

Who knows how much truth there is to this. The Cavs just “parted ways” with their GM David Griffin.  They are allegedly targeting Chauncey Billups as his replacement, which would be interesting since he’s not done this job before and it’s unclear what kind of grasp he has on the CBA and the tricks that seasoned GM’s have used to work palatable trades.

Also, I’m not sure how this could work without the Cavs giving back an All Star player. Is Kevin Love on his way out? Is Kyrie? Buried at the bottom of that Butler piece is this nugget:

All-Star Kyrie Irving has been contacting some of his former Team USA teammates and letting them know that he might be willing to push for a trade, especially if he feels the Cavs’ run could end quickly with James able to opt out after next season.

We are now suddenly faced with an implosion of the Cavs. With LeBron’s wife reportedly wanting to live in Los Angeles full-time (which would explain all the LeBron to LA rumors), it’s no surprise that Irving might be looking to see where the nearest emergency exits are.

With all that in mind, maybe the Cavs are willing to try something stupid and give up too much to keep this run going. However, I’m not exactly sure what that could be. A Love-centered deal makes little sense for the Bulls… so we’re looking at another multi-team scenario which will be impossible to pull off.

Gasol’s opt-out delivers San Antonio salary cap relief for next season, which could ultimately assist in maneuvering to become involved in free agency.

San Antonio has $76 million in guaranteed money on the book for 2017-18, but is above the salary cap because of $55 million in free-agent cap holds that include Gasol, Jonathan Simmons, Manu Ginobili and Patty Mills.

The Gasol restructuring itself doesn’t give San Antonio the money it needs, but moving Tony Parker or Danny Green to a team with cap space would make them players for Chris Paul or Kyle Lowry. Signing either of those guys would set off cascading repercussion that could reshape the league. If Blake Griffin’s decision is based on CP3’s, then he could bolt as well, which would likely involve Boston in some way. If Paul and Griffin both leave, then why would the Clippers keep DeAndre Jordan? That could trigger another trade frenzy.

If Lowry leaves, then the Raptors are suddenly middling around the East. Would they just let Serge Ibaka walk, then? Sign-and-trade him away? Would they move any other pieces in an effort to get into next year’s draft lottery?

Boston’s position in upcoming drafts and their young players would almost certainly involve them in any of these primary moves or one of the reactionary moves that surface in the wake of that first wave.

Considering we’re still two days from the draft, this could be one of the most tumultuous offseasons in our lifetime. Who the hell knows how this will all shake out?