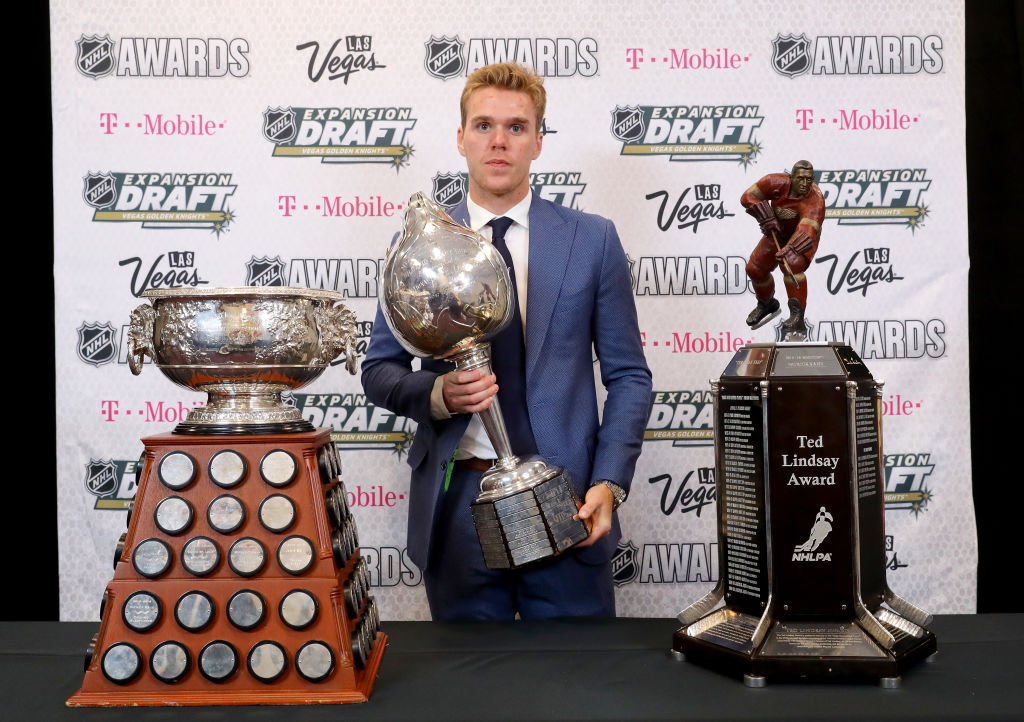 The NHL Awards descended upon Sin City again this postseason, moving from the MGM Grand to the brand-new T-Mobile Arena, which will house the brand new Las Vegas Golden Knights beginning this October. While the awards were somewhat overshadowed by the Golden Knights Expansion Draft picks, there were still some surprises to be had at the awards.

A throng of big-name stars from both conferences were up for awards, including Connor McDavid, Auston Matthews, Erik Karlsson, Sidney Crosby and the Tampa Bay Lightning’s own Victor Hedman.

The first award of the night was the Ted Lindsay Award, which is awarded to the NHL’s most outstanding player as voted on by members of the NHL Players Association. Previous winners include Lightning Founder Phil Esposito, who took the inaugural win, Mark Messier, Wayne Gretzky, Lightning General Manager Steve Yzerman, Jaromir Jagr and Lightning forward Martin St. Louis.

Joining this exclusive group would be Edmonton Oiler’s captain and child prodigy Connor McDavid, who beat out Conn Smythe Trophy winner Sidney Crosby of the Pittsburgh Penguins and Brent Burns of the San Jose Sharks.

LAS VEGAS, NV – JUNE 21: Patrice Bergeron of the Boston Bruins poses after winning the Frank J. Selke Trophy (Forward Who Best Excels in the Defensive Aspects of the Game) during the 2017 NHL Awards and Expansion Draft at T-Mobile Arena on June 21, 2017 in Las Vegas, Nevada. (Photo by Bruce Bennett/Getty Images)

The Selke Trophy, which is awarded to the forward who demonstrates the most skill in a defensive component of the game, was handed out next and went to Boston Bruins forward Patrice Bergeron, who is now a four-time winner, tying Montreal Canadien’s Bob Gainey who was on hand to present the award. Bergeron beat out Ryan Kesler of the Anaheim Ducks and Mikko Koivu of the Minnesota Wild.

In between the awards, the Las Vegas Golden Knights general manager George McPhee and owner Bill Foley named their picks from each team as their new fans filled the stands waiting to see who they would be cheering for.

Among those picked in the first round, former Lightning forward Jonathan Marchessault who was left unprotected by the Florida Panthers and could find himself one of the ones to watch in Las Vegas.

As if the awards and expansion draft announcement weren’t enough to fill the exciting evening, EA Sports announced the cover star for their NHL 18 game, which should be available sometime this fall. McDavid will grace the cover of the newest edition, and the graphics looks better than ever. It’s still amazing how year after year, EA continues to up their game graphics and make it look more and more lifelike.

LAS VEGAS, NV – JUNE 21: Auston Matthews of the Toronto Maple Leafs poses after winning the Calder Memorial Trophy (Rookie of the Year) during the 2017 NHL Awards and Expansion Draft at T-Mobile Arena on June 21, 2017 in Las Vegas, Nevada. (Photo by Bruce Bennett/Getty Images)

While Winnipeg Jets fans would like to think the race for the Calder Trophy for rookie of the year was tighter than it was, Auston Matthews of the Toronto Maple Leafs took this one home, beating out the Jets’ Patrik Laine and Columbus’ Zach Werenski. You get to win things like this when you score four goals in your first NHL game.

Another round of draft picks came upon us, and the Lightning lost defenseman Jason Garrison to the Vegas franchise. As a surprise to the fans in attendance, Garrison was welcomed on stage in a new Golden Knights jersey, as he waved to his new home. Also included in that pick, was a trade of the rights to Russian forward Nikita Gusev and a second round pick in 2017 and a fourth round pick in 2018. These conditions were made as a side deal where Vegas agreed not to select the Lightning’s young defensemen Slater Koekkoek and Jake Dotchin.

LAS VEGAS, NV – JUNE 21: Jason Garrison is interviewed after being selected by the Las Vegas Golden Knights during the 2017 NHL Awards and Expansion Draft at T-Mobile Arena on June 21, 2017 in Las Vegas, Nevada. (Photo by Bruce Bennett/Getty Images)

Nashville’s General Manager David Poile won General Manager of the year. Poile has been the Predator’s GM since they debuted, and this was his first win. Former Lightning coach John Tortorella picked up his second Jack Adam’s Award for coach of the year, this time thanks to the Blue Jackets 50 wins and 108 points.

One of the most favorite awards given out is the Bill Masterton Memorial Trophy. Local chapters of the Professional Hockey Writer’s Association nominate a player from each team who best fits the description. It is named after Bill Masterton, the only player in NHL history to die as a direct result of injuries suffered during a game. The winner is selected by a poll of the Professional Hockey Writers’ Association after each team nominates one player. It is often awarded to a player who has come back from a career or life-threatening illness or injury.

LAS VEGAS, NV – JUNE 21: Goaltender Craig Anderson of the Ottawa Senators poses after winning the Bill Masterton Memorial Trophy, awarded annually to the NHL player who “best exemplifies the qualities of perseverance, sportsmanship, and dedication to hockey” during the 2017 NHL Awards and Expansion Draft at T-Mobile Arena on June 21, 2017 in Las Vegas, Nevada. (Photo by Bruce Bennett/Getty Images)

Craig Anderson, the goaltender for the Ottawa Senators, is by far one of the most deserving players to receive this award. Anderson, whose wife Nicholle was diagnosed with cancer early in the season, helped his team advance to the Eastern Conference Final. He had taken a handful of leaves of absence from the team to be by her side as she underwent all of the extensive treatments, but he came back ready to play at Nicholle’s insistence.

The Lady Byng Trophy for gentlemanly play went to Calgary Flames’ forward Johnny Gaudreau, who had just four penalty minutes in 72 games with the Flames.

The show rolled on to another player who could have easily won the Masterton Trophy had he been nominated. Carolina Hurricane’s forward Bryan Bickell, who was diagnosed with multiple sclerosis in November of last year and played his last NHL game as the season closed out. The NHL put together a wonderful video package that paid tribute to a career that was cut short due to the illness, as well as the journey that he and his wife, Amanda, had taken in the past year.

Bickell, who won three Stanley Cups all with the Chicago Blackhawks, was invited on stage and thanked his teammates, his family and his wife. The NHL donated $20,000 to his foundation, while everyone wiped the tears from their cheeks during the moving moment.

The Vezina Trophy, awarded to the best goalie, was given out next, and it went to Columbus’ Sergei Bobrovsky.

Sergei Bobrovsky during the 2017 NHL Awards and Expansion Draft at T-Mobile Arena on June 21, 2017 in Las Vegas, Nevada.

Perhaps the most surprising moment of the night came during the announcement of the winner of the Hart Memorial Trophy. The Hart Trophy is awarded to the “player judged most valuable to his team” as voted by the Professional Hockey Writers Association. In a category that housed both Bobrovsky and Sidney Crosby, it was the Oilers’ phenom Connor McDavid who took home the award.

Connor McDavid during the 2017 NHL Awards and Expansion Draft at T-Mobile Arena on June 21, 2017 in Las Vegas, Nevada.

Other awards t hat were given out at a dinner the previous night included:

William M. Jennings Trophy (Goaltender(s) of team with the fewest goals against) – Braden Holtby –Washington Capitals (Holtby had a personal 127 of 182 goals against)