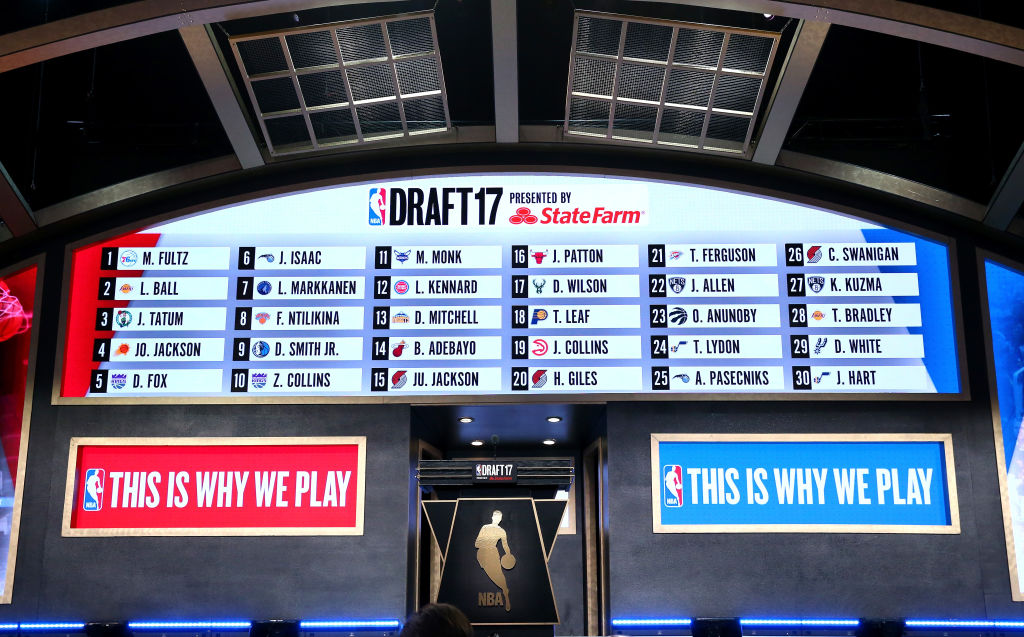 With the 2017 NBA Draft officially over, what are the top storylines from a night filled with ridiculous rumors and mass movement?

The 2017 NBA Draft is in the books, and whether you found it predictable or exciting, it was certainly eventful. 13 trades went down on draft night, which built on an already complicated sheet of picks owed.

This meant the commissioner was continually announcing picks for team A, while the plugged-in fan base had already learned from Adrian Wojnarowski that said player was actually heading elsewhere. By the end of the draft, the crowd at the Barclays Center in Brooklyn were shouting out the picks before associate commissioner Mark Tatum could get their names out.

While it’s cut and dry to declare winners and losers, the reality is that few teams can say with certainty how their picks will turn out. So instead of shoving teams into boxes, we will instead just look at the highlights.

What are the nine biggest storylines from the 2017 NBA Draft?

Prior to the draft on Thursday night, LaVar Ball declared that Lonzo Ball was going to be a Laker, a fact given to him at Lonzo’s birth. Where did he receive this information? From Zeus and from Jesus. One would think if LaVar had that sort of hookup he could find a way to create an original shoe design…

Setting LaVar aside, Lonzo is going to be a culture-changer in Los Angeles who should start putting up stats immediately. There are doubts about whether he can reach the lofty heights pre-ordained for him, and if Paul George and LeBron James don’t end up in purple and gold he is going to struggle as a top option. But for now, Lakers fans have something exciting to watch.

The Philadelphia 76ers Will Be Fun to Watch

If Lonzo Ball’s Lakers are going to be fun, the 76ers are going to take things to a whole other level. Joel Embiid and Ben Simmons have completely welcomed Markelle Fultz into the fold, and they are ready to take Big Baller Brand and wipe it off the court.

Please dunk on him so hard that his daddy runs on the court to save him.. https://t.co/cMvt5RYiSQ

The Minnesota Timberwolves had a young nucleus that the NBA community fell in love with, but the 76ers are (once again) going to take things to a whole other level. “The Process” is a perfect mix of dominance on the court and clever on social media. Simmons is under the radar as the league’s next star, and Fultz is the guard they’ve been waiting for since Allen Iverson left. Get ready for a widely entertaining season as “The Process” becomes “The Results.” Here’s hoping we get a few more tweets like this one too:

"Excited to head to (City) and join the (team name)."—Markelle Fultz pic.twitter.com/eUzTf7fs46

The Boston Celtics Have Depth, Options and Potential – As Usual

The Boston Celtics made their move a few days before the draft, trading down from the first pick for the third and a future lottery selection. That extended their timeline yet again while not sacrificing much in the present – classic Danny Ainge. He then proceeded to take Jayson Tatum, the best offensive wing in the draft and a player with superstar potential. He pairs perfectly with Jaylen Brown on the wing.

The Celtics then turned around and took a first-round player in the second round. Semi Ojeleye was ranked 22nd on my Big Board, and he fell to Boston at 37. A strong combo forward, Ojeleye is Jae Crowder lite with potential to become Jae Crowder 2.0, freeing Ainge to include Crowder in a deal for a superstar. They added another pair of defensive-minded players at the end of the second round, most likely to take advantage of the new two-way G-League contracts. The Celtics are going to be good again next year, but they are setting themselves up to be great for a long time.

The Sacramento Kings are Changing Their Culture

From top to bottom, the Sacramento Kings organization has been a toxic culture, with players scrambling to leave at every opportunity and coaches rotating through like a change of clothes. But starting in February, Vlade Divac signaled the team was going to work hard to change that culture, no matter how painful the process:

Shots fired by Vlade in the official release. pic.twitter.com/4ja1ehxTUP

He followed through with that mandate on draft night, taking high-character players at every turn. While there are serious questions about whether a point guard who can’t shoot or a power forward with three knee surgeries can be championship players, the reality is that the Kings are fighting for a championship culture first. And with De’Aaron Fox, Justin Jackson, Harry Giles, and Frank Mason, they have done what they can.

The Indiana Pacers are Over a Barrel

Paul George announced last week that he is planning to leave Indiana next summer, whether he is traded or not. The Pacers and GM Kevin Pritchard took that hard, calling it a “gut punch”. The Pacers immediately began looking around for potential trade suitors, but their leverage is all but gone now that George could be nothing more than a one-year rental.

With Jeff Teague entering free agency, Indiana has to decide if they are going to play out the string or tear things down. If they opt for the latter, they won’t want to re-sign Teague. In the midst of that uncertainty, they used their first-round pick on T.J. Leaf, a stretch-4 who cannot create his own shot or play defense. Their second-round picks go to a raw center with knee issues and a point guard with a torn ACL. This team could have used a sure-thing, but they got nothing of the sort.

The Denver Nuggets Missed Their Chance

When the Denver Nuggets were on the clock with the 13th pick, the draft board had been laid out beautifully. The team desperately needs defensive talent, and perhaps the best perimeter defender in not just this draft but a long time was available for them in OG Anunoby. Instead they traded down, acquiring Trey Lyles and the 24th pick from the Utah Jazz. Perhaps it was a gamble Anunoby would fall, and he did…to the Toronto Raptors at 23. The Nuggets then took Tyler Lydon, a defensively-challenged stretch-4. This team wants to make the playoffs next year and beyond, but it’s a huge question how they will stop anyone. They didn’t address that issue on Thursday night.

The Chicago Bulls Were Fleeced

After a year of rumors surrounding Jimmy Butler, the Chicago Bulls finally pulled the trigger on a trade. Much like last draft night, the Minnesota Timberwolves made the hard push for Butler, but this time they got their man. In exchange for Zach LaVine, Kris Dunn, and the seventh overall pick the Bulls sent Minnesota Butler…and the 16th pick! With LaVine recovering from an ACL tear and Kris Dunn perhaps the latest NBA bust, Chicago fell flat on their face in maximizing the value of their superstar. Now they get to pay Dwyane Wade $24 million to play on a bottom-feeder.

Ready to signal their youth movement, Chicago could have used that 16th pick; instead they tossed it into the deal. Then their next chance to add a young player was at 38, the last remnant of a long-running pick protection with the Sacramento Kings. The Bulls sold that pick to the Golden State Warriors (!) and ended up with just Lauri Markkanen as their haul from the draft. This is not how you rebuild.

The Minnesota Timberwolves Won’t Be in the Lottery Next Year

Karl-Anthony Towns will probably become the best center in the NBA over the next few years, if not by next season. Andrew Wiggins is still a legitimate star in the making on the wing with two-way potential. Tom Thibodeau is one of the league’s best defensive minds and sees success at every stop. It’s possible they would have made the playoffs this coming year without a major change in talent.

Instead they have all but locked that in by adding Jimmy Butler, a top-15 player in the league who can lockdown opposing wings and generate offense on the other end. With cap space heading into free agency, the team can add shooting as well, either with a guard such as J.J. Redick or Patty Mills, or with a stretch-4 type such as Patrick Patterson or Nikola Mirotic. This team is ready to make the leap.

Everybody Got the Steal of the Night

Last summer the Golden State Warriors and Milwaukee Bucks both struck gold in the second round, adding two-way players who made an immediate impact for playoff teams in Patrick McCaw (No. 38 overall) and Malcolm Brogdon (N0. 36 overall). This time around, seemingly every second round pick was declared a “steal” and a “great value.” It’s as if every player in the class secretly had a first-round grade.

My personal board would praise the Celtics (Semi Ojeleye), Warriors (Jordan Bell), and Clippers (Jawun Evans) for getting first round talents in the second. But others propped up the Grizzlies, Pelicans, 76ers, Magic, Lakers, Rockets, Pacers, Suns, and Nuggets for their second round steals. The odds are two or three of these teams will hit on these picks, but most will be end-of-the-bench players at best. Calm down NBA world!