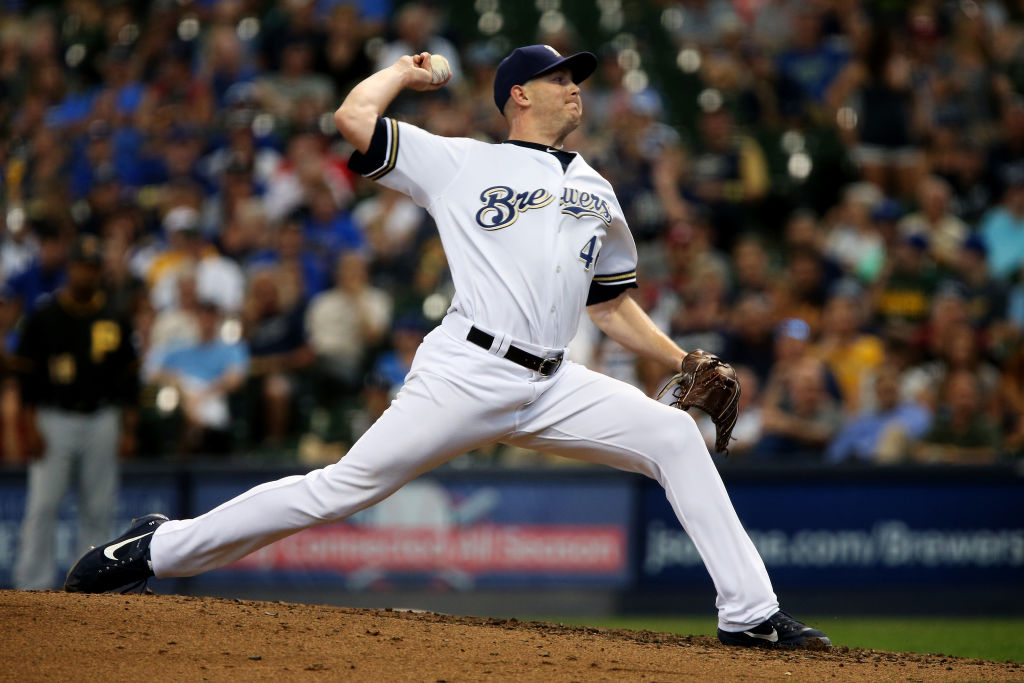 Corey Knebel Breaks a Record: With its scrupulous attention to statistics, baseball has a way of making fans care about obscure records for at least a short period of time.  I suspect most fans didn’t have any strong feelings about the record for Most Consecutive Relief Appearances with at Least One Strikeout to Start a Season until a few weeks ago, when Brewers-affiliated media made us aware that Knebel was closing in on the mark of 37 set by Aroldis Chapman in 2014.  Then we started caring a little bit.

Last week, Knebel broke the record against the Pirates, which made us care slightly more than a little bit.

If Knebel manages to break the record for Most Consecutive Relief Appearances with One Strikeout Period Even Across Multiple Seasons (49) then presumably we’ll care even more, and then stop caring altogether.  There’s a metaphor for the human condition in there somewhere.

Poor Jett Bandy: A couple months into the season, it looked like the Brewers had found an unlikely 1-2 punch to replace longtime All-Star catcher Jonathan Lucroy in the form of Manny Piña and Jett Bandy.  Splitting playing time fairly evenly, both catchers had some noteworthy defensive plays while posting respectable offensive numbers.  At the end of May, Piña was hitting .303 with an .804 OPS, while Bandy was at .269 and .839 respectively.  Sadly, the month of June has not been kind of Bandy, who has gone 2-for-42 and seen his average slip down to .211.  With the recent news that the Brewers claimed catcher Stephen Vogt off waivers, it was little surprise Bandy was optioned to Triple-A Colorado Springs.  That’s just too bad when a guy is doing pretty well and then loses it.  There’s probably another metaphor for the human condition in there somewhere.

Eric Sogard and Orlando Arcia Hurt Pirates: The Brewers middle infield had a productive series against Pittsburgh on both sides of the ball.  Sogard and Arcia were a combined 12-for-26 at the plate, but they really shined on defense.  Sogard started a wicked double play on Wednesday that bailed Junior Guerra out of another grinding inning.  Even better, Arcia sealed the win that day with this game-ending beauty:

The next day, Sogard gunned down a sucker at the plate, helping salvage a series split with the pesky Pirates.

It would be a shame if a returning Jonathan Villar cut significantly into any of these guys’ playing time.

When last we saw the Cincinnati Reds, the Brewers were just barely over .500, thanks in no small part to defeating the Reds on six out of seven occasions.  Since then, the Brewers are a little farther over .500 and have played above average against non-Reds teams, holding their first place position in the NL Central for about a month.  Can the Brewers continue their early season trend of whipping the Reds?  Can Eric Thames break out of his funk against the team that served up 40% of his 2017 homeruns?  Will the last-place Reds turn the tables on the Brewers, making fools of those of us who said they couldn’t wait to play the Reds again?

Then the Crew returns home for the Miami Marlins’ only visit to Milwaukee.  Since 2014, I’ve wondered if Giancarlo Stanton is ever going to get revenge on the Brewers for ending his season with a face-breaking fastball.  There are some great players outside of the NL Central who have tormented the Brewers over the years, like Paul Goldschmidt and Adrian Gonzalez.  Stanton is not one of those players – he has a relatively non-threatening .180/.301/.418 slash line against Milwaukee.  Maybe the face pitch intimidated him into mediocrity?  That seems unlikely.  If we’re looking for other potential storylines with a series against Miami…it’s a chance to see Ichiro Suzuki, one of the few players some middle-aged men can point to and say, “There’s still one pro athlete older than me.”  I’ll be looking forward to that, you better believe.