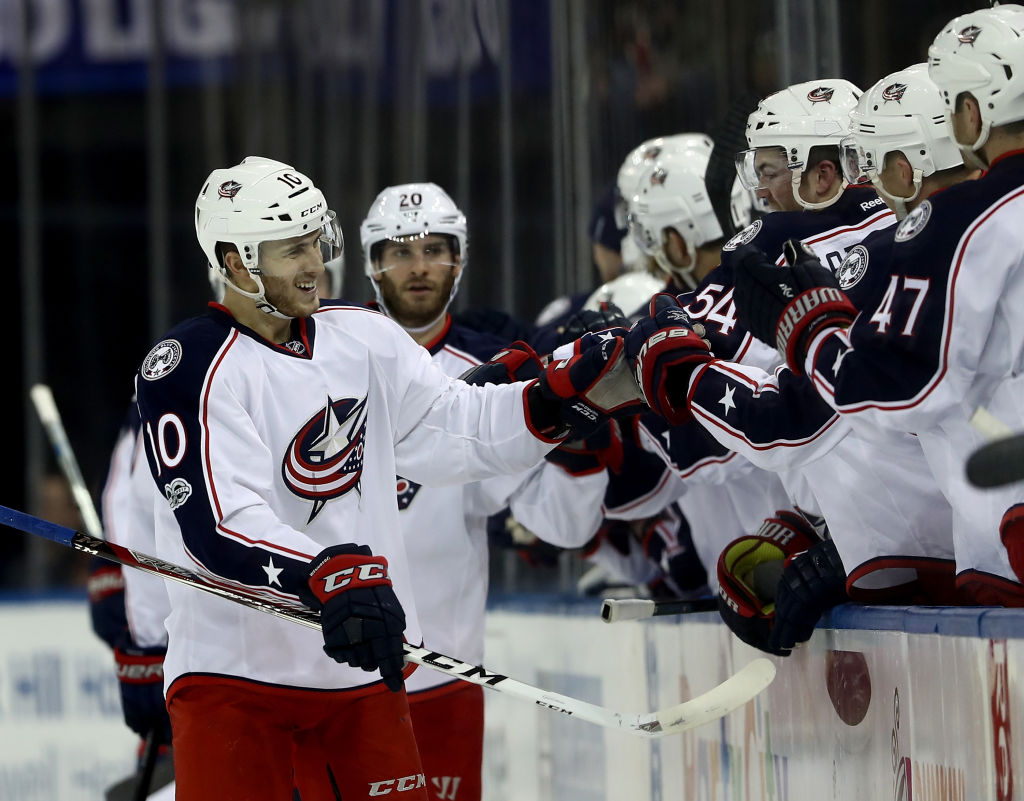 We’re continuing our review of the 2016-17 Blue Jackets, this time we’re taking a look at Alexander Wennberg’s performance.

Two important things… First, don’t let the words he chooses for each style’s title be the only understanding of each type that you have, if you haven’t already read Ryan’s work, we highly recommend doing so. Second, look at each player’s shape as a measure against each axis. The total area doesn’t matter, rather, what matters is how strong they are (how much farther out in the wheel) on each measure.

We’ve also picked two players (one on each extreme of a good to not-so-good scale) to show as comparison for each Jackets player. For forwards, you’ll see each Jacket lined up against Sidney Crosby (good) and Cody McLeod (bad).

Wennberg entered the 2016-2017 season with a chance to grab the biggest role of his career. The trade that sent Ryan Johansen to the Nashville Predators gave Wennberg an opportunity to officially become the number one center for the Columbus Blue Jackets.

This wasn’t a new spot for Wennberg to be in, as seemingly all of his NHL seasons have been preceded by questions of what he can accomplish. His rookie year was him trying to cement himself as an NHLer, his sophomore season was him trying to prove that he was already a top-six forward and his most recent season was a test of whether or not he could take on even more responsibilities.

In his upgraded role, Wennberg was able to increase both his goal and assist output, giving him 59 points on the season and representing yet another year of consistent production growth from the young forward.

On the shot metric side of things, Wennberg improved again, posting a career-best 51.8% CF% and a +1.4% relCF% at even strength.

Essentially, in a bigger role with about two more minutes of 5v5 ice time per game, Wennberg posted career best numbers in both CF60 and CA60 and increased his production output by 19 points.

Wennberg has always been known as a passer and his NHL career has been no exception. He’s among the league’s best in secondary and tertiary shot assists and is one of the Blue Jackets’ biggest passing threats.

This should come as no surprise. Wennberg was tied for 15th in the league in assists last year with a total of 46 and was the third youngest player in the top 15. He’s among some pretty incredible players on that list and he’s doing it at a very young age.

Wennberg is one of the premier passers in the league, but he can become an even bigger offensive force if he can improve in primary shot assists.

On the other side of the coin, Wennberg could probably pass less and shoot more.

His aversion to shooting has almost become some sort of joke around CBJ-land. Is it really a Blue Jackets game if Wennberg doesn’t make a pass when he has an open lane to shoot? Is it really a valid hockey game if Scott Hartnell doesn’t fall down?

It’s also been the reason for a stoppage of practice and a source of frustration for Head Coach John Tortorella:

Ultimately, Wennberg would be a better player if he were more balanced. I’m sure he and the coaching staff know this.

But the area where he could make an even bigger improvement is in his transition play. According to the viz, Wennberg is not too great at either carrying the puck in the zone or passing the puck to a player about to enter the zone.

Wennberg sees the game well and has great passing skill, it’d be a noticeable improvement for both him and the team if he were to shore up the transition aspect of his game.

Wennberg answered many of the questions he faced going into last year. The question this year seems to be: Can he continue to grow?

Short answer: I’d bet on it. I’d expect 70 points from Wennberg in 82 games next season.

Long answer: According to Ryan Stimson’s recent work on player types, playmakers are more valuable than shooters, and more specifically to this conversation, playmakers are better linemates for balanced forwards like Wennberg.

This trade swapped Brandon Saad (a shooter) for Artemi Panarin (a playmaker), and replacing Saad with Panarin on Wennberg’s wing should help increase his 5v5 output.

Here’s a look at Wennberg’s most common linemates last year in the context of Stimson’s recent work, which assigns each player a type and then figures out the line’s expected goal rates, or xG%:

And here’s a look at a couple possible line combos for Wennberg next year:

Either line is theoretically a better one for Wennberg to be centering next year, and adding a shooter to the mix like Atkinson or Jenner could make for a very good top line for the club.

Plus, aside from finding players to better suit him at 5v5, the recent Panarin acquisition gives Wennberg another weapon on the powerplay, whereas Saad had only three power play points all season.

Hopefully, Wennberg will be able to benefit from Panarin’s dynamism and playmaking ability.

Ultimately, Wennberg had a very successful season and was a driving force behind much of the Blue Jackets success. He’s proven that he’s still growing and has shown that there’s still room to grow, which is important as well. I’m looking forward to seeing just how much further he can go this upcoming season.

Special thanks to Ryan Stimson and all of the Passing Project volunteers that made such a cool project possible, and another thanks for letting blogger like me use it.

Another special thanks to FirstLineStats , where I got some stats from for this post.