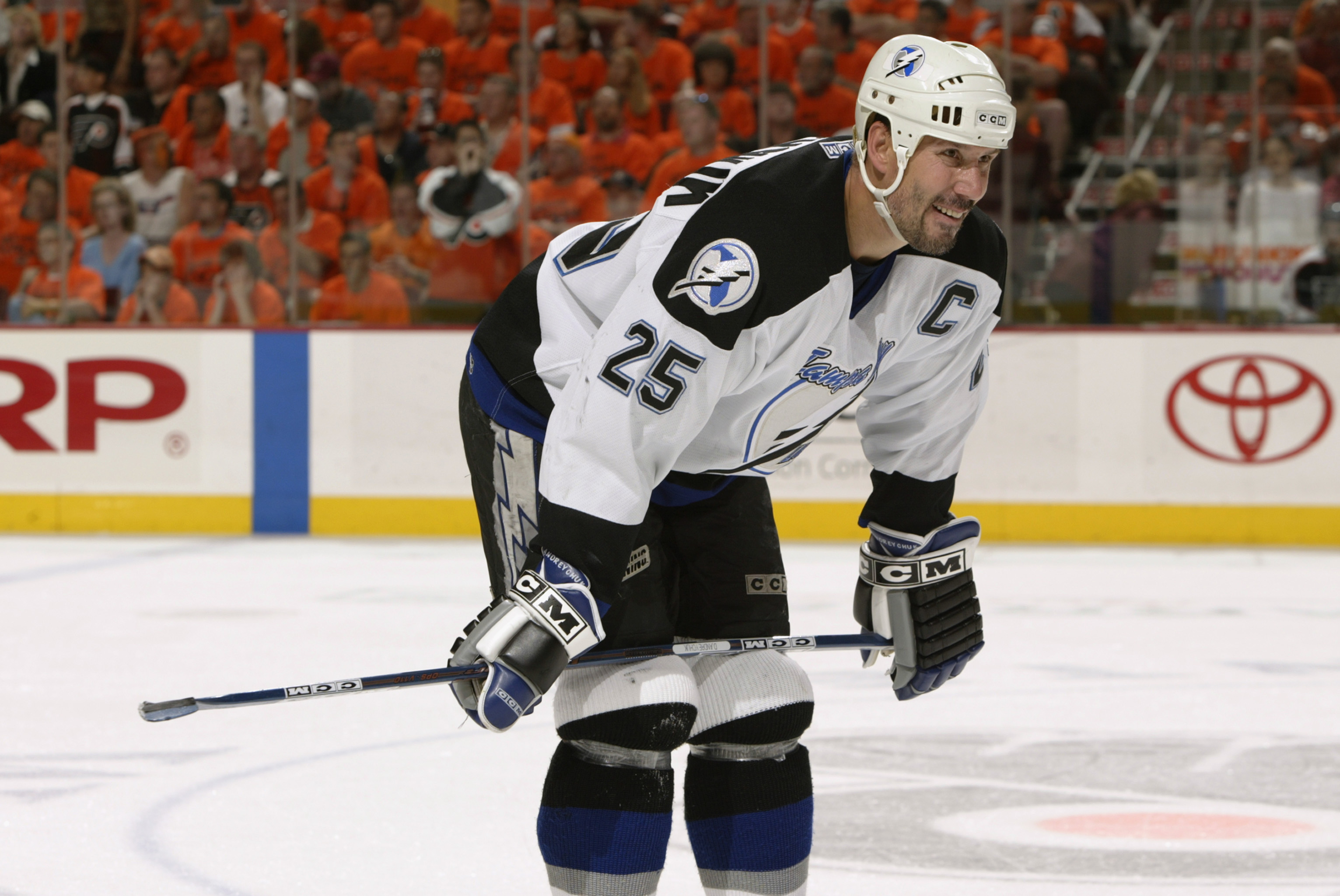 To say the Lightning’s early years were tumultuous is a bit of an understatement. There was a revolving door of ownership, lots of losses, and the struggle of a hockey team looking to carve out an identity in Florida of all places. By the early 2000s they were in desperate need of some stability and leadership. Enter Dave Andreychuk.

A veteran that had played for two decades around the NHL, Andreychuk opted to sign with Tampa Bay instead of returning to the Buffalo Sabres. Not long after that walking on the Lightning logo in the locker room became a fineable offense. It may not have seemed like that big of a shift but it was a sign of what was to come. Andreychuk was named captain of the team on 9/11/02. That season the Bolts made it to the playoffs for the first time in seven years and made it out of the first round for the first time in franchise history.

Tampa Bay may have had talented young players like Vincent Lecavalier, Brad Richards, and Martin St. Louis on the ice but Andreychuk helped to create a culture of accountability and respect in the locker room. He brought an impressive resume to the team and taught his new teammates about what it took to succeed in the show. It may have been a gamble for Andreychuk to come to Tampa but it worked out pretty well for all those involved.

Andreychuk made history during Tampa Bay’s 4-2 win over the San Jose Sharks by scoring the 250th power play goal of his career. In an odd twist of fate, his record setting tally put him one ahead of Lightning founder Phil Esposito on the all time list.

The goal game at 9:43 into the game. Andreychuk was fighting off a check from defenseman Scott Hannan and redirected a Brad Richards pass to the front of the net past goaltender Evgeni Nabokov. It was a vintage Andreychuk goal from his “office” in front of the net. Andreychuk would finish his career with 274 PPGs, the most on NHL history.

Not long after setting the power play goal record, Andreychuk would reach another milestone. The Lightning were on the road against the New Jersey Devils. He would become just the 14th player to reach that mark in league history. It was only fitting that number 600 game on a power play 33 seconds into the third period. The Lightning came onto the ice to celebrate the achievement with their captain. Two minutes later he would deflect a pick past Corey Schwab to reach 601.

When the Lightning made their playoff push in 2004, no active player had appeared in more regular and postseason games without winning the Stanley Cup than Dave Andreychuk. After 22 seasons in a difficult league like the NHL his opportunities to finally reach that goal, this was likely his has last and best chance. Luckily for the Captain the Lightning enjoyed an absolutely magic season. They weren’t just good, they were great. Despite a large portion of the team having limited playoff experience they staked their claim to the Cup in Game 7 of the SCF against the Calgary Flames.

Everyone remembers the moment when Andreychuk lifted the trophy for the first time. A lesser known fact is that the captain was sitting in the penalty box on a roughing call at 19:37. He may have had the best seat in the St. Pete Times Forum to witness his teammates go crazy as time expired. Andreychuk holding the Cup aloft will endure as one of the most important moments in Lightning history. It’s only fitting. They may not have gotten there without his contributions and leadership.

Andreychuk’s contributions to the Tampa Bay Lightning were so vital that in the spring of 2014 a life size bronze statue of the captain was unveiled on the arena’s plaza. The moment seared into the memories of so many Lightning fans was now immortalized for all who come to the building. He’s remained a key figure for the team whether as a television analyst or as Vice President of Corporate and Community Affairs.

There’s been lots of news coming down the UFC pipe today, most of it revolving around UFC 214.  Now here’s a third one.  In...