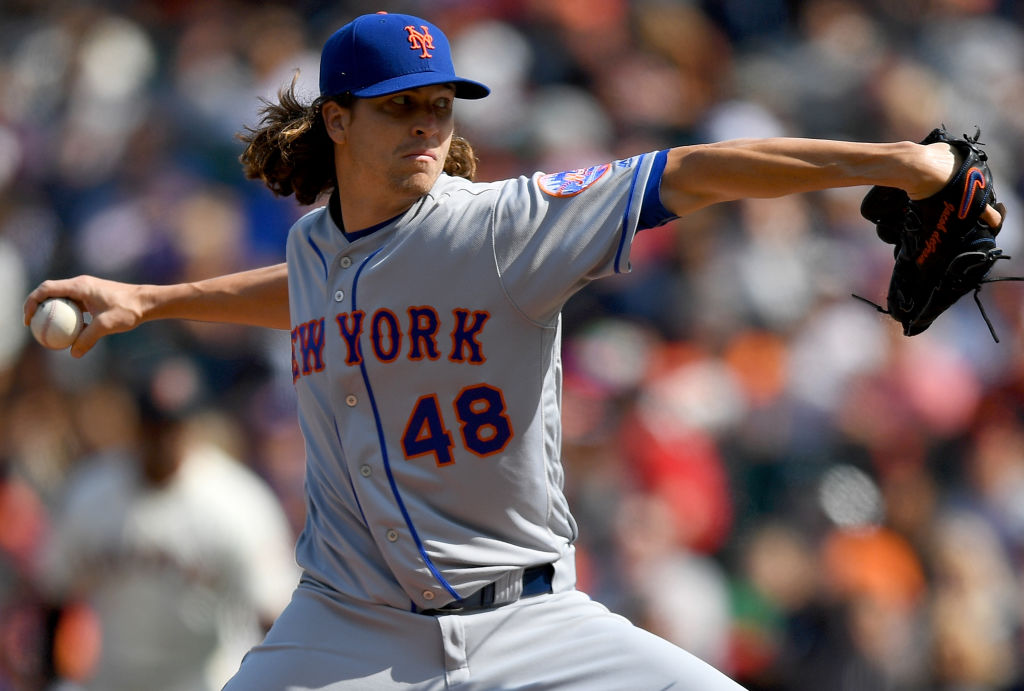 Selection of the rosters for the All Star Game will be revealed Sunday night, and the New York Mets don’t figure to have more than the minimum of one representative. The Mets sent four players and their entire coaching staff to the All Star Game last year, although no players appeared in the game due to injury and curious managing from Terry Collins. The team’s poor record this season all but assures that there will be only one Mets’ representative in Miami thanks to the rule requiring all teams have a player at the All Star Game. The game no longer counts for home field advantage in the World Series, meaning that rosters have shrunk back to 32 for a normal exhibition game. Major League Baseball has also taken away the final selections from the manager, meaning National League skipper Joe Maddon can’t load his bench with Cubs’ players or take Jerry Blevins as a lefty specialist for his bullpen.

SAN FRANCISCO, CA – JUNE 24: Jacob deGrom #48 of the New York Mets pitches against the San Francisco Giants in the bottom of the first inning at AT&T Park on June 24, 2017 in San Francisco, California. (Photo by Thearon W. Henderson/Getty Images)

For a while it looked as if Michael Conforto was a lock to make the midsummer classic, but a slump and a hand injury have all but ended his candidacy. The two Mets’ players most likely to be selected now are outfielder Jay Bruce and starting pitcher Jacob deGrom. Bruce has been the Mets’ most consistent hitter for much of the season, batting .270 while leading the team in homers (20) and RBI’s (54), and is on pace for a monster year. deGrom’s numbers are respectable, as he checks into his start tonight carrying a 7-3 record and a 3.71 ERA. The ERA is a bit elevated for deGrom thanks to a couple of clunkers a few weeks ago, but he has struck out 113 batters in 97 innings to rank eighth in the NL in that category. deGrom will have a chance to put a further stamp on his candidacy by putting forth another dominant effort tonight against the Philadelphia Phillies, who he has owned in his career and currently are the worst team in baseball.

The choice between deGrom and Bruce should come down to how the players vote in their ballot. After fans elect the starters, the players get a ballot to choose the reserves and pitchers, with the commissioner’s office filling out the roster after that. If the players elect either Bruce or deGrom, they will make the team and that will settle that. If neither is selected, the commissioner’s office will have to choose which player represents the Mets at the All Star Game. Both Bruce and deGrom have been to the All Star Game before, so the pick would likely come down to what the commissioner’s office feels the NL team needs. That might give a leg up to deGrom since there haven’t been a ton of great pitchers in the NL but a lot of strong hitters, but that pesky rule requiring each team to have a rep could influence things.

The All Star rosters are slated to be revealed on Sunday, July 2nd on ESPN. The selection show will air at 7:00 pm, one hour prior to the network’s scheduled broadcast of a game between the Detroit Tigers and Tampa Bay Rays.