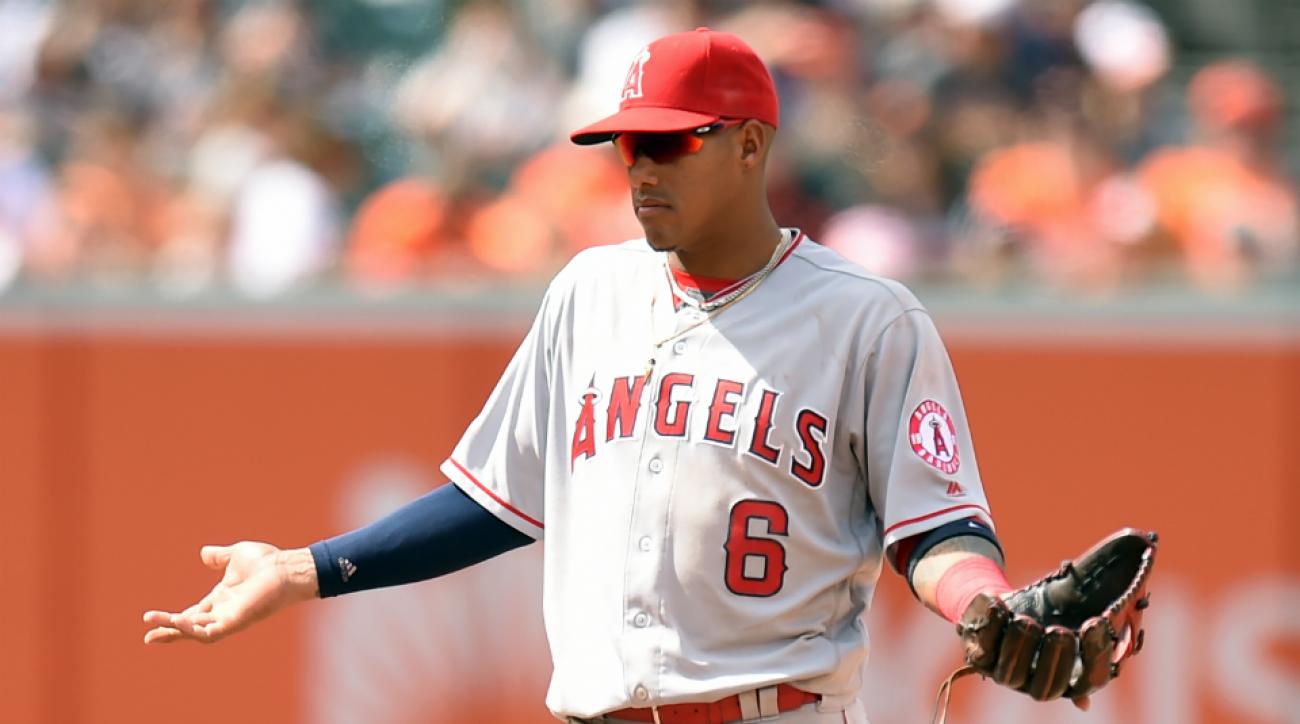 As we continue the Trade Deadline Series we will move back to the position player side of the equation and examine the market for 3B Yunel Escobar.

So far in 2017, Escobar’s platoon splits have been a bit more pronounced as he has improved a bit against LHP (145 wRC+) but has dropped an equivalent amount against RHP (90 wRC+), decreasing his overall offensive production by about 2% from last year.

This difference may be BABIP related in both directions as he appears to have been extra lucky against LHP and unlucky versus RHP so those splits may smooth out as the season wears on.

None of this hides the fact of what the eyes see on a regular basis which is a player who can still make an occasionally good play but consistently suffers on more difficult fielding attempts and is unable to make steady, quality transfers from glove to hand and execute accurate throws across the diamond.

Most teams know at this point they are playing Yunel for his bat control, contact ability, and on-base skills which he still does well. Once those go or he is completely unable to play 3B his playing days might be numbered. You just cannot lose defensive versatility or your offensive skills if you want to stay in the Majors.

Let us take a look at the contending teams that might need Escobar’s services.

At a quick glance you would not think that Arizona needs a player like Yunel especially when you consider that they have the young, budding star Jake Lamb at 3B.

What is disguised deep beneath the Diamondbacks strong success so far this season is the fact that they currently rank 28th in the Majors against LHP. You know you probably have an issue when your two catchers, first baseman, and utility MIF are the only players on the team that have positive wRC+ numbers against lefties.

Now certainly Arizona is going to continue playing Lamb mostly full-time but adding a corner utility infielder like Escobar would be very wise for a team that plays in a Division that tends to be a little more lefty-heavy than others, particularly their fiercest rivals like the Dodgers and the Rockies.

Although they will view him as a utility guy who can play 3B and maybe 1B and LF it is quite probable that the Angels can get Yunel’s relative value despite the fact the Diamondbacks won’t play him full-time.

Trade Scenario(s): The Diamondbacks have a pretty darn good team overall but if they wind up in the playoffs against a team like the Dodgers, heavy in left-handed starters, they will likely go home early so a hitter like Escobar, who destroys LHP, makes sense. Also with Nick Ahmed fracturing his wrist they might need a lefty-mashing hitter like Espinosa as a defensive utility backup.

Chase Headley has not been performing to his previous norms but he has been solid against RHP so far this season with declining defense.

They have no full-time need for Yunel but they might be interested in bringing him in as a backup corner INF to provide depth and the ability to hit LHP of which Chase has been terrible against this year and to back up Chris Carter or possibly Tyler Austin who just hit the disabled list.

Trade Scenario(s): The Yankees might take a flyer on Escobar as part of a platoon with Chase Headley but if they were to inquire on anyone first it would probably be one of our available relievers, particularly one that can get RHH’s out well.

Boston has run out multiple players at 3B to no avail in the first half of 2017. The group as a whole holds a meager wRC+ of 81 and it has been a black hole of production that the Red Sox, if they want to seriously compete, need to fill.

Unfortunately the Angels will face some competition in the market from other pure rental players like Mike Moustakas, Todd Frazier, and Jed Lowrie, all three of which are equal or better defenders than Escobar and will likely be available at the deadline.

Trade Scenario(s): The Red Sox are running out their 5th 3B over the last week and might have serious interest in Yunel Escobar as a less expensive option. Also Boston almost assuredly would like to beef up their bullpen for a stretch run in the very competitive A.L. East, preferably a two-way type reliever that can impact both sides of the plate. Finally Boston might have interest in a quality defensive utility player so Espinosa and Pennington might be in play too.

Baltimore has lost their regular shortstop J.J. Hardy for at least 4 weeks with a fracture in his right hand.

This may be a blessing in disguise because J.J. was not providing his usual elite defense (good but not great) and his offense has been abysmal, sitting at a wRC+ of 43 over 239 plate appearances.

The reality at this point is if the Orioles want to compete they need to find a replacement solution at either SS or 3B to rectify the situation. Moving Machado to shortstop is one move they could make to take advantage of the available options (potentially Moustakas, Lowrie, Frazier, and Escobar) at 3B, including Yunel.

Trade Scenario(s): The Orioles have many needs including a corner outfielder, starting pitcher, a productive 3B or SS (Machado can play either), and at least one starting pitcher.

First and foremost Yunel is crushing LHP this year to the tune of a 145 wRC+. He still does reasonably well against RHP but destroying left-handed pitchers is his thing. His run creation would improve any team in the League against LHP, period. He has also proven he can hit out of the lead-off position.

If a team does not see him as a regular 3B for the remainder of 2017, one or more should, at the very least, view him as a good choice to be a utility corner infielder. That however would diminish his sparse value even further making it questionable if it is even worth it for the Angels to move him.

So if the Angels cannot find a team that wants to fully utilize Escobar in a full-time role the only way they might still get fair value is if they trade him to a team as part of a larger package to obtain a player with longer term control. In that scenario Yunel would wind up as a replacement player, likely on a team that is out of contention.

Escobar’s market is thin and complicated further by better options on the trade market. It is possible that the Angels could include Yunel in a deal for one of those other rental third basemen, so it is not a completely lost cause, but it probably won’t be easy for Eppler to find a suitor.

This is a situation that may result in Escobar simply playing out the rest of the season in Anaheim. It could really go either way at this point barring an injury to a third baseman on another team in contention.

Author’s Best Guess: This is a difficult one to try and predict so I will go with the Angels, if they are playing for a Wild Card spot, trading both 1B C.J. Cron and 3B Yunel Escobar to the Royals in exchange for 3B Mike Moustakas and A C Meibrys Viloria. The Royals get three years of control of Cron to fill their probable 2nd half of 2017 and 2018 and beyond needs at either 1B or DH, Escobar replaces Moustakas for the remainder of the season and the Angels pick up a pure rental in Mike and a long-term prospect in Viloria.