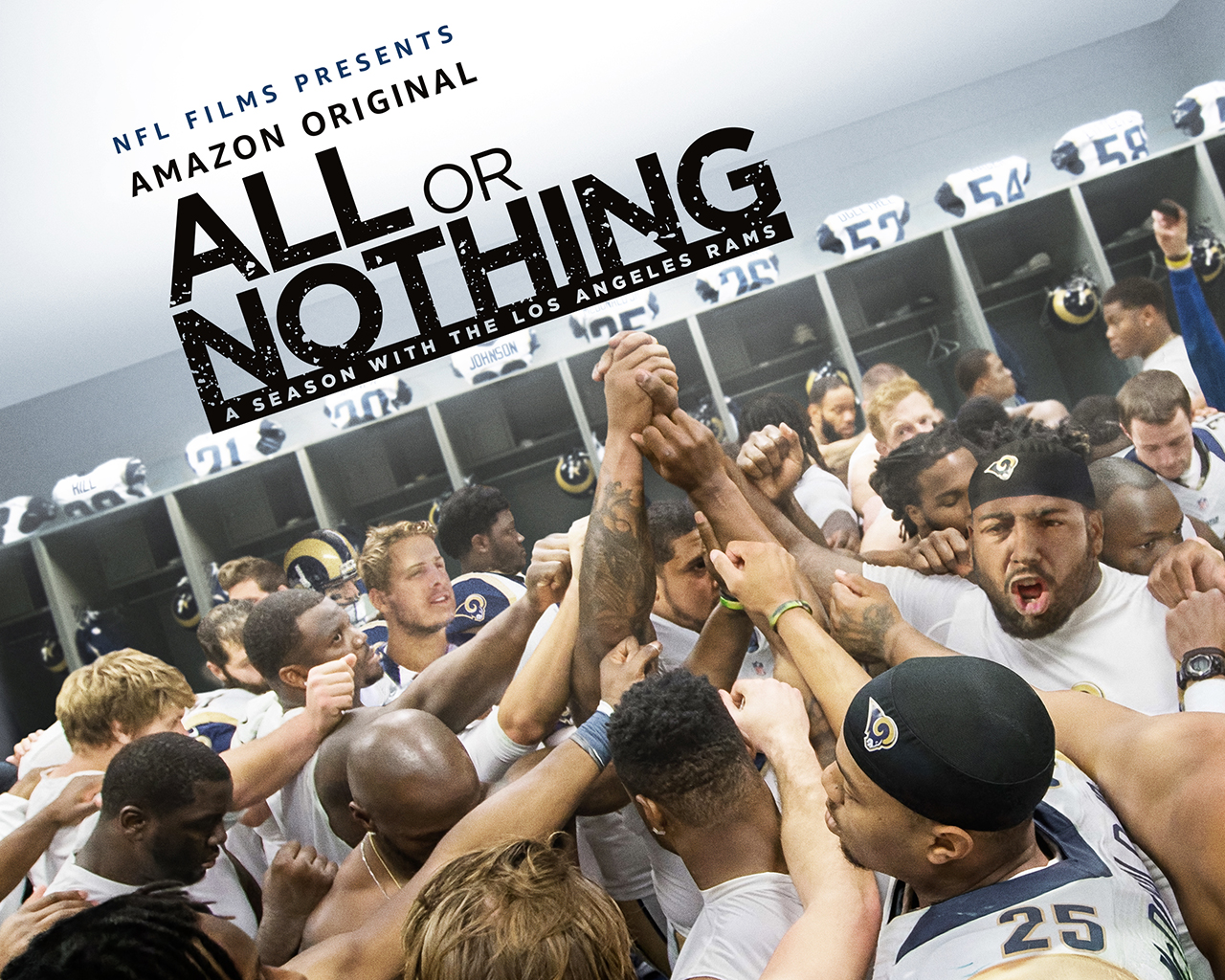 You know, unless you want to. Then who am I to stop you?

NOTE: This is a St. Louis Cardinals blog. You are correct. If you don’t want to read 1,400+ words about a TV show featuring the L.A. Rams, you can skip everything below. None of what was written relates to the Cardinals in any way. Fair warning.

When HBO and NFL Films premiered Hard Knocks in 2001, it was a revelation.

The show took us truly behind the scenes of the defending Super Bowl champion Baltimore Ravens training camp. It was riveting sports TV that made stars of players like Shannon Sharpe and Ray Lewis.

If you liked professional football, this was appointment TV.

Hell, it was probably worth the subscription price of HBO all on its own.

I remember wanting the Rams to be on this show soooooo bad for years. And each season when a new team was announced there was a slight pang of disappointment when it was some other squad like the Falcons or Dolphins or Texans.

I still watched, though.

Even though the storylines have been a bit stale the past couple of iterations (player X is a really good guy and hams it up for the camera, but he’s undersized, will he make the team, et al), I still enjoyed it.

Then the Rams moved and – of course – they were finally picked for Hard Knocks.

It was too soon, though. I sat it out.

Two years ago, some genius at Amazon was like ‘You know what would be really cool? What if we did the ‘Hard Knocks’ thing, but during the actual season when the games count and the drama is much more intense than at training camp?’

In 2016 the premiere season of ‘All or Nothing’ debuted. And that beautiful bastard’s idea was validated.

The show was amazing. It felt like 2001 all over again.

Season 1 followed the Arizona Cardinals all the way through their 2015 campaign (that ended with a loss to Carolina in the NFC Championship game). I think I watched all 8 hours straight without a single break. Couldn’t get enough.

The series was pretty much Amazon taking HBO’s lunch money… there’s no way that ‘Hard Knocks’ can ever be as good as ‘All or Nothing’ – it’s some real pre/post iPhone type stuff.

Season 2 of ‘All or Nothing’ debuted this week.

With the L.A. Rams as the subject.

Now maybe the fact that I knew they went 4-12 and had a miserable first season in Los Angeles gave me the strength to watch this season. Or maybe it was having the Rams not torture me for an entire calendar year and wanting to get something sadomasochistic back into my life.

Regardless, I watched it.

Perhaps you have no interest in watching. I’d completely understand if you didn’t.

But I did and below are my 21 takeaways (1 for every year I was a fan of the team). This post is nothing more than catharsis for me. I’m no longer a Rams fans, but I used to be. And most of the players/coaches featured this season are still familiar.

Some of these observations won’t surprise you (Demoff isn’t super cool) and some might (Jeff Fisher is oddly sympathetic) – but all are just the gut ramblings of a dude that just hate-binged a show.

So here goes nothing.

1. John Fassel might be one of the nicest guys in the NFL or just life in general. And the only dude on the show that ever showed an ounce of sympathy for the city of St. Louis and the life he had there. I’ll be damned if I didn’t accidentally catch myself rooting for the Rams in week 16 when they lost a close game to the 49ers because of him being the interim head coach… before snapping out of it.

2. Roger Saffold took a fair amount of shit from Rams fans in St. Louis. I’m not sure if he was just camera shy in the STL or what… but he came across as super thoughtful and a superb family man in this show. In fact, his mother made a surprise Christmas appearance and stole the scene. When informed that there were only 2 games to go: “THANK GOD”

3. Jon Hamm is the narrator. If you ever doubted his acting chops, look no further than his VO work on this. He’s working hard to make a 4-12 season sound dramatic.

4. Kevin Demoff, man. The guy has a strained relationship with the truth. Here are actual quotes he said immediately after Jeff Fisher left the team meeting called to break the news that he’d been fired: “This is a great coaching staff.” | “This is a great group of players.” | “I don’t want anyone here to carry any guilt.” | “This is not Coach Fisher’s fault”. | ORLY? Cause it seems like you just fired a guy. What other options are there?

5. Here’s Coach Fisher breaking the news to his staff, BTW:

6. TV nerd item here, but the title cards and the way this production team intros each episode is just outstanding. They should get all the awards.

7. The way the Rams did their player intros for the home opener with the Red Hot Chili Peppers was damn cool. Tough to swallow what LA got versus what we got in STL:

The official vacuum cleaner of the St Louis Rams. https://t.co/26qlJm1gia

9. For the very last time in print (probably), will they just go to the damn royal and yellow uni combo permanently? How, how, HOW are the navy/whites still a thing?

10. Gregg Williams is about as charming as you’d imagine. I mean, it’s football. So you’re going to get your fair share of yelling. But Mike Singletary was on the staff last year and they show him giving one – and only one – speech and I was ready to go through a damn wall. Williams should have let others do more of the yelling… might have helped.

11. So the very first game after he was fired, Jeff Fisher and (I assume) his wife were in the parking lot waving goodbye to the team as they headed out for a road game. Surely there was a reason for this, but it wasn’t explained:

12. (TRIGGER WARNING) – I don’t even want to type this. But the stadium complex that the Rams are building is probably going to be the most impressive venue in North America come 2020. I know, I know. The new renderings they showed were impressive.

13. I’m so very sorry for having to type point #12. I was firmly in the ‘it’s a stadium how much better can it be than the one STL was going to pay 400M dollars towards’ camp. Got to be honest though, it’s an awesome looking plan:

14. Doesn’t mean that Stan knows anything about how to to use a shovel. His dirt toss on the groundbreaking ceremony didn’t reek of a man that’s seen much manual labor lately.

15. Did I mention the Saffold’s were delightful? Here they are taking tea in London during the Rams visit to play the Giants:

16. Case Keenum seems like the kind of guy you’d want your daughter to marry. It was interesting to see Fisher tell Stan Kroenke before Keenum’s start against the Jets that win or loose, he was out of a starting job afterward (Rams did win 9-6).

17. NFL teams! They make PowerPoint presentations as bad as we do!

18. Thought that Tavon Austin would have been a big character on this. And I can’t recall him ever talking on camera (there were a couple times when coaches were talking to him where you do get some audio, though). All in all, very little face time.

19. I’m sure Amazon/NFL Films did they best they could with a dud of a season. And nothing’s ever as good as your first time around. But the fact that Arizona was in some amazing games in season 1 made the actual game action that NFL Films is famous for so much more tolerable. The quality of the shots in season 2 is superb… but loses a bit of luster when the stakes are so low and everyone knows it. And there is a lot of game action.

20. No, Stan doesn’t address St. Louis. And seems to disappear altogether until the ’17 draft after the Rams lose the momentum of their 3-1 start. Least the dude could do is thank Rams supporters in the Midwest for going above and beyond for a team that didn’t deserve it. He doesn’t.

21. That’s it. I’m officially, OFFICIALLY done with the Rams.

You can find ‘All or Nothing’ season 2 on Amazon Prime Video.

All screengrabs above are courtesy of Amazon.