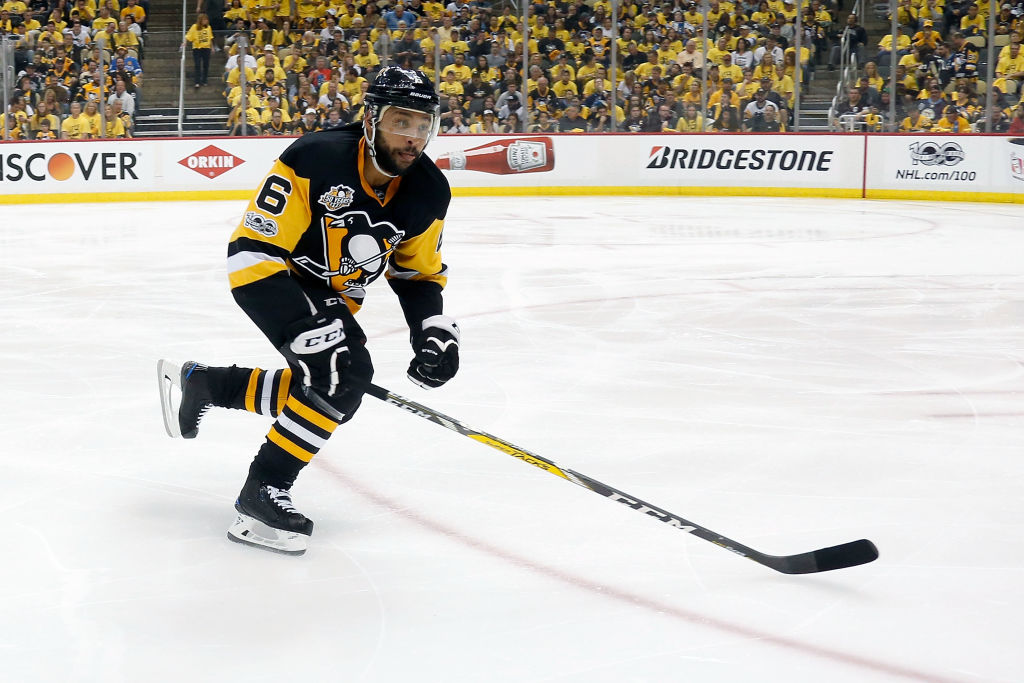 In the first few hours of NHL free agency, the Stanley Cup-repeating Pittsburgh Penguins have lost several key pieces of their championship team. Two-time champs Trevor Daley and Nick Bonino moved westward, while veteran defenseman Ron Hainsey took his talents north of the border. Chris Kunitz has also moved on from Pittsburgh, opting for the Tampa Bay Lightning in a one-year, $2 million deal.

Additionally, the Penguins have recently lost Marc-Andre Fleury in the expansion draft to the newly minted Vegas Golden Knights, and are also likely to lose depth forward Matt Cullen to retirement. Given how important these six players have been to the Penguins’ success, general manager Jim Rutherford will have to work hard to replace them.

First, Daley signed a three-year contract with the Detroit Red Wings, bringing in a cool $9.5 million. The Red Wings’ 25-year-long playoff streak was finally broken in this past season, and they found themselves near the bottom of the barrel in the standings. It’s certainly rebuilding time in Detroit, and Daley will be a great asset for them in that attempt.

He offers a strong veteran presence, and is never afraid to get scrappy, but also is able to get up the ice quickly and bring offense when necessary. Those are all factors of the game that Detroit needs badly.

As for the Penguins, they made it through one Cup win with Daley sidelined. It’s not impossible to succeed without him, especially with Kris Letang and Justin Schultz. However, Daley was always a good number-two defenseman when the oft-injured Letang was out of the lineup, and the Penguins occasionally struggled when both were out of the lineup.

Bonino was a great player late in the season, when he really seemed to find his groove both of the past years. He really exceeded expectations and came in clutch more than a few times in Pittsburgh. He frequently sacrificed his body to block shots and despite how often he got hurt doing that, it’s a necessary part of the game and rare to see a guy who throws himself in a slapshot’s path several times a night.

He also spent the past two years centering speedy players such as Carl Hagelin and Phil Kessel. Though he isn’t the fastest, his supporting role to help the quicker players out was invaluable and will also be critical on his new team, the Nashville Predators. The Preds are one of the few teams who can make the Penguins look slow, and Bonino will fit in well in a similar, if elevated, role there.

Reports have surfaced out of Pittsburgh that Rutherford has been talking to at least five teams about picking up a third-line center to replace Bonino, but there’s plenty of decent options available without making a trade. Though Jussi Jokinen already did some time in Pittsburgh, it’s not out of the question that he could return. Despite his age and the fact he was just bought out by the Florida Panthers, he really shines on the faceoff dot – something the Penguins struggled with during the playoffs and may continue to struggle with without Matt Cullen.

Of course, the big “trade bait” name is Matt Duchene out of Colorado, who could also be a third-line center (and would probably be a better, younger fit than Jokinen). The number of teams in contention for Duchene seems to have dropped as other, cheaper moves have been made, meaning that if Pittsburgh is willing to part with certain assets they may have a great shot at acquiring him.

The Pens also lost Ron Hainsey, who’s at the tail end of his career and showed his age more than once during his first-ever playoff run this past season. It’s not quite as big of a loss as Daley, and he’ll add some size to the Toronto Maple Leafs’ lineup after they let Brian Boyle walk.

However, losing two defensemen is no small hole to fill. To that end, the Penguins signed former Maple Leaf Matt Hunwick to a three-year contract. Hunwick is okay but nothing to write home about, and his contract seems too big for what he could actually provide for the team. On the other hand, every time we question a move Rutherford makes, it turns out great in the end, so we’ll have to wait and see.

The Penguins also signed Antti Niemi to back up Matt Murray following Fleury’s exodus to Vegas. Niemi was recently bought out by the Dallas Stars after they found themselves with a surplus of goalies on their hands, and brings a Cup win of his own to the championship atmosphere in Pittsburgh. He hasn’t been phenomenal in recent years and has bounced around from team to team after posting low save percentages, but a one-year, $700,000 contract is a small gamble.

The Penguins want young Tristan Jarry to develop in the AHL for another year, and if all goes well Jarry will be ready to go by the time Niemi’s contract expires. Jarry may even see some action this year: the Penguins have the most back-to-back games of any team in the league and Niemi will have a huge burden to bear in those stretches. If he starts to fall apart like he did last season, head coach Mike Sullivan might prefer to call up Jarry and give him some experience while hoping for the best.

It’s worked before, of course.

As there are still big names floating around the free agent market and there are many trades still seemingly on the table, it’s unlikely the Penguins are done making moves. As the day progressed, they re-signed Schultz to a three-year, $16.5 million contract, as well as several bubble players like Tom Sestito and Frank Corrado. They also still need to work on contracts with restricted free agents Brian Dumoulin and Conor Sheary.

Keep an eye out for more low-risk, high-reward deals – or, on the other hand, a blockbuster trade. With Jim Rutherford behind the GM desk, there’s really no telling what could happen!