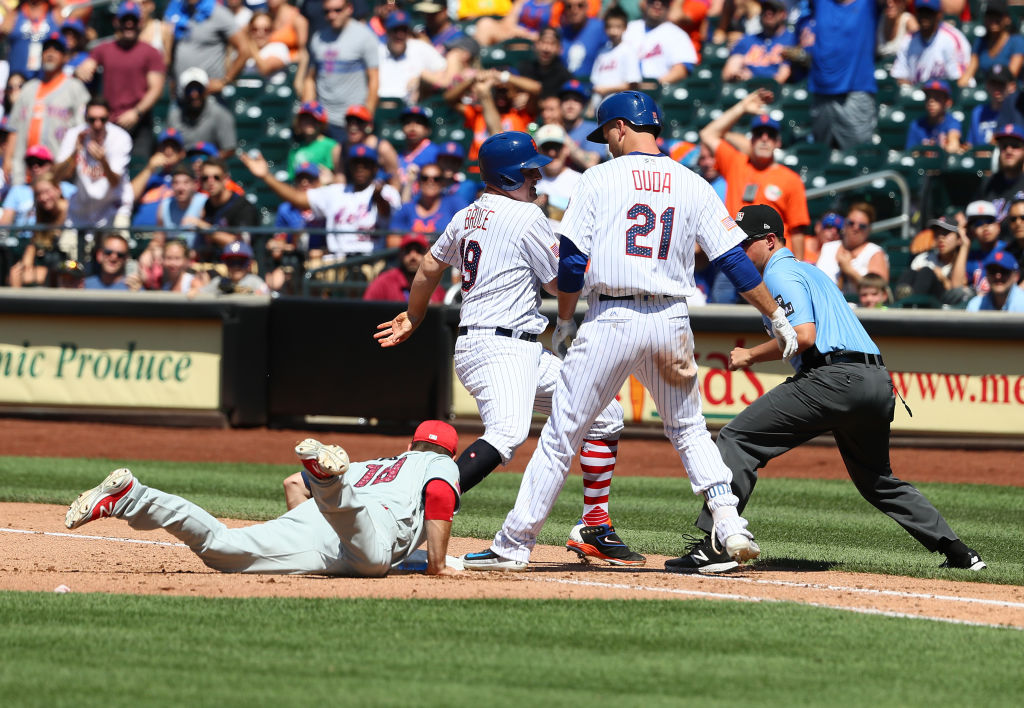 Two years to the day of Terry Collins suggesting human sacrifice as a way to get out of the dog days of a season where they won the National League pennant, it was the offense that died against Nick Pivetta and the Phillies in a 7-1 loss at Citi Field. We all knew we had to hold our breath to get through a Rafael Montero start, and sure enough he gave up four runs in the second inning to sink the Mets, including a run on a wild pitch where Andrew Knapp scored from second base. But all in all for an eighth starter, Montero wasn’t horrible. The Mets lineup, however, was. One hit off any Phillie pitcher is inexcusable, one hit off Nick Pivetta, a guy who was pitching in his tenth start in the major leagues, is intent to injure our souls. Perhaps the Mets should revisit the human sacrifice idea.

Maybe it should involve Aaron Altherr, who lucked into a double play by not catching a simple fly ball clean, but then catching it off his shoulder to confuse everybody (including his own pitcher) to get Jay Bruce out at first base with the score still manageable at 4-1 in the seventh. This was before the bullpen used their tactical flame thrower on the game.

So if you want silver linings, there are these: After the sweep by the Dodgers and losing three of four to the Nationals before that, the Mets have gained that ground back by going 7-2 against the dregs of the league. Now they get Washington again for a three game set in the district, which is also good because the Nationals treat Citi Field as their own personal sandbox. More good news: The Mets have their pitching rotation set up as good as they can have it with Steven Matz vs Stephen Strasburg, Seth Lugo vs Joe Ross, and Jacob deGrom vs Tanner Roark and his glowing mammaries.

Going 7-2 against the Giants, Marlins, and Phillies is the least this team could do. The Mets have done less than the minimum for us before so this is no small feat. But now the Mets have to show us something by having success against a good team. The only time the Mets have won a series against a team over .500 was against the Nationals in Washington in April … and that was the series with the 23-5 game after losing Noah Syndergaard. They split a four game series against Milwaukee and won a series against the Cubs who are right at .500, but that’s it. There hasn’t been a series that the Mets have won this year where you can say they clearly took it to a really good team, and felt good about them afterwards. They’ll have another chance in D.C. in a series they have to have to hold any hope of yet another miracle.

Curtis Granderson missed the game with a bum hip. No truth to the rumor that Ray Ramirez was seen fleeing Citi Field with a hockey mask and a machete. The Mets are getting ready to activate Tsuyoshi Shinjo.

Michael Conforto was voted into the All-Star game in Miami by his peers. At the end of May, this would have probably been a no-brainer. But after a tough June which ended with Conforto hitting .206 and about to land on the disabled list, it’s a mild surprise with bigger names like Jacob deGrom heating up (and in the vignette for FOX’s All Star Game commerical) and Jay Bruce on pace for 40 home runs. But with the pitching staff for the N.L. crowded with guys like Strasburg, Clayton Kershaw, and Brad Hand because San Diego had to have a representative, it’s somewhat understandable that deGrom didn’t make it. But he deserves it, so he’ll probably get in after one of the existing All-Stars pitches too close to the game or comes up with a phantom injury. Bruce will probably wind up replacing Conforto if the Mets training staff turns Conforto’s bruise into a combination of malaria, chicken pox and insomnia. Things like this tend to work itself out, which is why it’s pointless for you to get worked up over All Star game snubs.