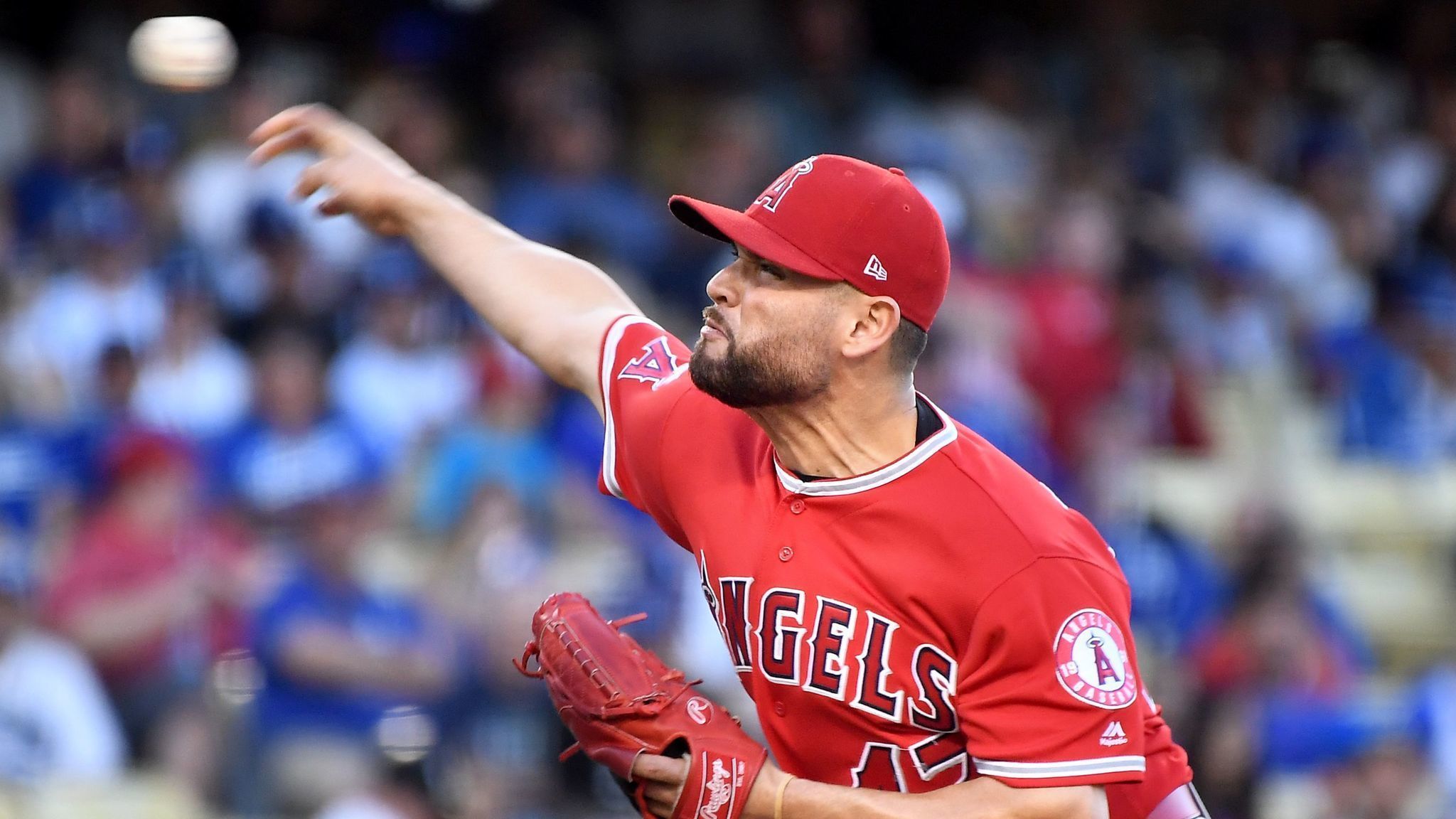 Next up in the series is our trusty innings-eater Mr. Ricky Nolasco.

Ricky is in the last guaranteed year of his contract with approximately $4M remaining in the 2017 season (the Twins picked up $4M of his 2017 salary). He does have a 2018 team option that could have turned into a player option if he had pitched enough innings this year but that is looking very unlikely at this point in time. The 2018 team option is $13M with a $1M buyout that the Twins will pick up if the Angels exercise it.

Nolasco has, over the last three seasons, been a tale of two Ricky’s: his peripherals against LHH’s have been abysmal (6.9% K-BB% so far in 2017) and versus RHH’s they have been quite good (18.3% K-BB% over the same period). The actual results this year have been bad primarily due to a serious home run issue (his HR/9 rate basically doubled over 2016).

Unless there is a mechanical or even a pitch-tipping issue involved you would have to believe that Nolasco’s home run issue will regress a bit. His career HR/9 rate is 1.14 so the current 2.3 number is really abnormal. His pitches have been hit harder this year so that obviously is contributing to the problem but it still seems too high.

Based on these observations of his peripherals the teams that are going to be most interested in Ricky and his skill set are teams that have been performing poorly against RHH’s and need a back-end starter to fill out their team, preferably in the National League but that is not a requirement.

Let us take a look at Nolasco’s possible suitors.

When you examine Minnesota’s rotation and bullpen it is pretty amazing that they are where they are in the standing to date. The bullpen is a mess and the rotation is pretty damn rough. It is quite an ugly sight.

The Twins GM has stated that he is not going to deviate too far from their rebuild effort so there won’t be a bunch of fireworks for the team at the deadline but making at least one or two moves to shore up their pitching will be critical to any further success.

Now of course we acquired Ricky from the Twins at the trade deadline last year so this may be an embarrassing trade to acquire him back but, for Minnesota who is already paying part of his 2017 salary, it could be a necessary and familiar one since they already have a sunk cost buried in the player and know him better than other teams.

Trade Scenario(s): The Twins really could use massive improvement in their pitching across the board and a more productive outfielder. They are also in dire need of right-handed and left-handed relief help. Additionally adding a lead-off hitter would move Dozier to the 2-hole and strengthen and lengthen their lineup as a whole.

Not dissimilar to Minnesota, the Rangers have managed to stay in the Wild Card conversation on the back of a not-so-great pitching staff.

Texas’ rotation, which has been carried by Yu Darvish to-date, currently features the returning Cole Hamels along with Tyson Ross, Andrew Cashner, and newbie Austin Bibens-Dirkx. All have their warts but Cashner in particular has been a big disappointment after Rangers management signed him to a 1 year, $10M deal.

Moving Andrew to the bullpen where his velocity might play up better would allow Texas to avoid designating him for assignment and could help solve two problems by potentially upgrading their bullpen and replacing his rotation spot with a better performing starter like Nolasco.

Trade Scenario(s): The Rangers, just like the Angels, are on the outskirts of the Wild Card race. If they do close the gap adding a starter and one of our relievers as a pure rental piece is the most likely outcome if Eppler chooses to do business with a Division rival.

Milwaukee has been leading the National League Central Division for a while now and their surprising contention will likely lead their GM to make some moves ahead of the deadline as a show of support to the young squad they are building.

Recently they lost SP Chase Anderson to the disabled list for a handful of weeks with an oblique strain and right-handed pitchers Zach Davies and Junior Guerra have not exactly been lighting the world on fire.

A move to secure a back-end starting pitcher like Nolasco could go a long way towards their goal of winning their Division.

Trade Scenario(s): Milwaukee is in first place and recently they have indicated they are open to potentially adding bullpen help as they near the deadline. A mid or back-end rotation rental piece would be useful too. The caveat to those needs is that they are unwilling to trade any of their top tier pieces, per MLBTradeRumors.com, so in light of that we will only consider certain Brewers prospects and players in this discussion.

Baltimore is doing their best to cough up the early lead they built at the beginning of the season but they are still on the outskirts of the Wild Card race and cannot be discounted.

If the Orioles decide to stick with this season despite the obvious decline in their performance they will need to solve their rotation woes and one option might be Ricky Nolasco since they ranked 25th in our Methodology article against RHH’s.

Trade Scenario(s): The Orioles need a more reliable left fielder and lead-off hitter and could use at least one, if not two, starting pitchers.

Chicago started off the season with some razor-thin depth in their rotation, then improved it with smart acquisitions like Alec Mills and Eddie Butler, and then watched it evaporate with injuries to Brett Anderson and Kyle Kendricks.

Suffice it to say that Butler and Montgomery are performing less than stellar to date, so Epstein may want one or possibly two starters to replace them. Now Kendricks should return from the DL where he landed with right-hand tendinitis making the need less but Theo may want to reinforce the rotation with a veteran starter and move Montgomery back to the bullpen.

Trade Scenario(s): The Cubs and the Angels, beside executing a prospect trade, only appear to match up well in a rotation-based trade. It is possible Chicago may have interest in one our relievers that can get left-handed hitters out but it would be a luxury purchase as they have quite a few effective, two-way bullpen pieces, making that more remote.

Nolasco is a pitcher who has his warts. The high number of home runs in 2017 combined with his relative ineffectiveness against LHH’s will certainly give any acquiring team some pause in terms of fit.

However Ricky’s high K-BB% (18%-19%) versus RHH’s is an attractive trait and the abnormally high home run rate has quite a bit of room for regression although how much it will do so is, of course, dependent upon him making adjustments.

Nolasco’s ability to soak up innings and his ERA of 4.42 (MLB starters are currently at 4.48) will be attractive to teams in need of a back-end #4 or #5 starter. Additionally, as the Orange County Register’s Jeff Fletcher noted recently, there is the option for 2018 at $13M with the $1M buyout (paid for already by the Twins) which will give an extra year of control to any acquiring team and has a high likelihood of being exercised.

This basically means that Ricky’s value as a starter under control for 1 1/2 years is approximately that of Maybin and Norris: a mid-tier quality prospect plus one lesser prospect, give or take.

The five teams listed above, the Twins, Rangers, Brewers, Orioles, and Cubs, all seem to have a need for one or more rotation pieces, particularly at the mid and back-end.

There are other teams that might be on the bubble of needing a starter, like the Rockies for instance who may not be happy with Tyler Chatwood’s performance, but they are more remote in terms of need. Some teams like the Indians, Nationals, and Dodgers have electric groups of starters and enough depth to absorb an injury or two.

Of course this can change at a moment’s notice if a pitcher gets injured or hurt so this list is more of a guide than some surefire list of suitors.

Finally we should discuss the similarities between J.C. Ramirez and Ricky Nolasco:

As you can see J.C.’s splits are fairly similar to Nolasco’s with less of a delta between left and right-hand sides. Additionally Ramirez has an additional 3 years of team control (through the 2021 season).

Basically the teams listed above that would have interest in Ricky could also have interest in J.C. based on this similarity they would just wind up paying more in players and prospects for Ramirez over Nolasco.

All of this trading a starter talk may be pointless if the Angels still have Shoemaker and Skaggs on the disabled list leading up to the deadline so this will be an optional trade market for Eppler which I am sure he is exploring but may not execute on if the team feels uncomfortable regarding Matt’s and Tyler’s timely return.

Whether it is now or in the off-season, Nolasco is a likely trade chip for Billy as the $13M option for next season would tie up payroll that could be used elsewhere on the roster and the potential payroll-friendly prospect or prospects Ricky could bring back would likely prove valuable now or in the future.

Author’s Best Guess: This is a purely speculative guess as the market for Nolasco could collapse if one or more of the potential suitors listed above drop out of the playoff race. Based on that I’m going to select the Chicago Cubs because they are in the National League where, hypothetically, Ricky’s numbers would improve ever-so-slightly, they have the payroll space to handle the salary, and they match up fairly well to our needs.