As Chris Paul gets comfortable and gears up for the next step in his career in Houston, the growing speculation that Carmelo Anthony will join him continues.

The Rockets’ acquisition of Paul made a major splash this summer and figures to alter the competitive landscape of the NBA. As Anthony’s fate also hangs in the balance, the Knicks are equally as effected by this most recent shift.

With New York looking for a solution to the Anthony saga, Adrian Wojnarowski reports that the Knicks and Rockets are now exploring different trade partners, potentially for a four team deal in order to get something done.

This is great proof, not only of the appeal playing with Paul influences Anthony’s decision, but of the power he has over this situation. The Knicks are truly at the mercy of their star forward as both sides hope for a deal. It was difficult enough to curate a trade that worked for both sides when Paul was on the Clippers. Now with the Rockets, it appears even more tricky to design something that allows New York to get back something desirable in return for Anthony’s services.

Any deal involving Anthony would also likely include Ryan Anderson. A prototypical stretch four, Anderson shot a career-high 40% from deep under Rockets’ head coach Mike D’Antoni. He elevated his game, but even such an effort doesn’t justify the near $61 million left on his contract over the next three seasons. With the Knicks’ future lying in the hands of a front court featuring Kristaps Porzingis and Willy Hernangomez, they simply can’t afford to spend that much money on another big man. Any deal involving Anthony should net the Knicks cap relief and future assets, especially as they embrace a youth movement that requires patience and flexibility.

Thus, it makes sense that these two sides (probably more so the Knicks) are feverishly looking for additional trade partners. The Rockets know what they want, and thanks to Anthony’s no-trade clause, he has the power to, essentially, ensure they get it. As for New York, they’ll need to find another team willing and able to take on Anderson’s contract. Simply ridding themselves of the possibility of taking on Anderson’s contract would be a victory in of itself for the team’s front office. That said, wanting to reel in something of value for their most talented player in Anthony makes sense too. It should be considered a must.

Needless to say, Anthony’s power and Anderson’s contract certainly complicate the possibilities the Knicks have of coming out bonafide winners of any potential deal that may be on the horizon. 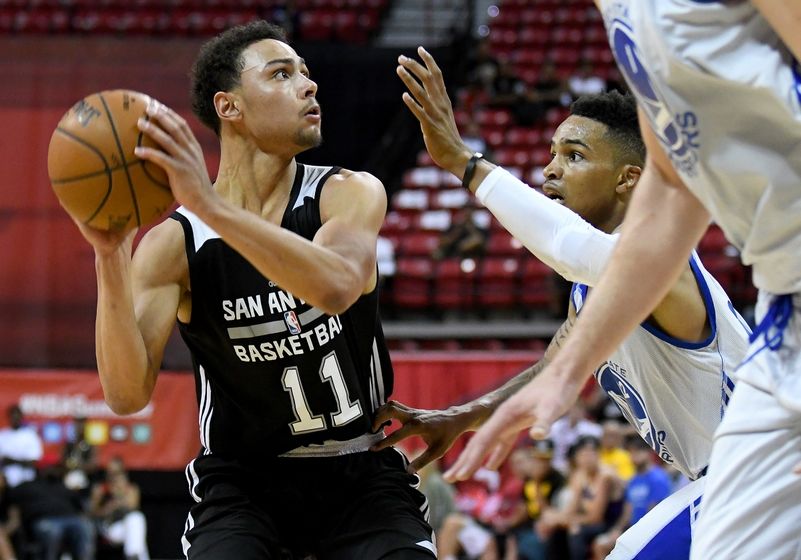 In another high scoring affair, the Summer Spurs prevailed 99-85 over the Summer Trail Blazers. The #SummerofBryn continued as Forbes led the way with 35...