New York Mets Could Be Active Sellers at the Trade Deadline 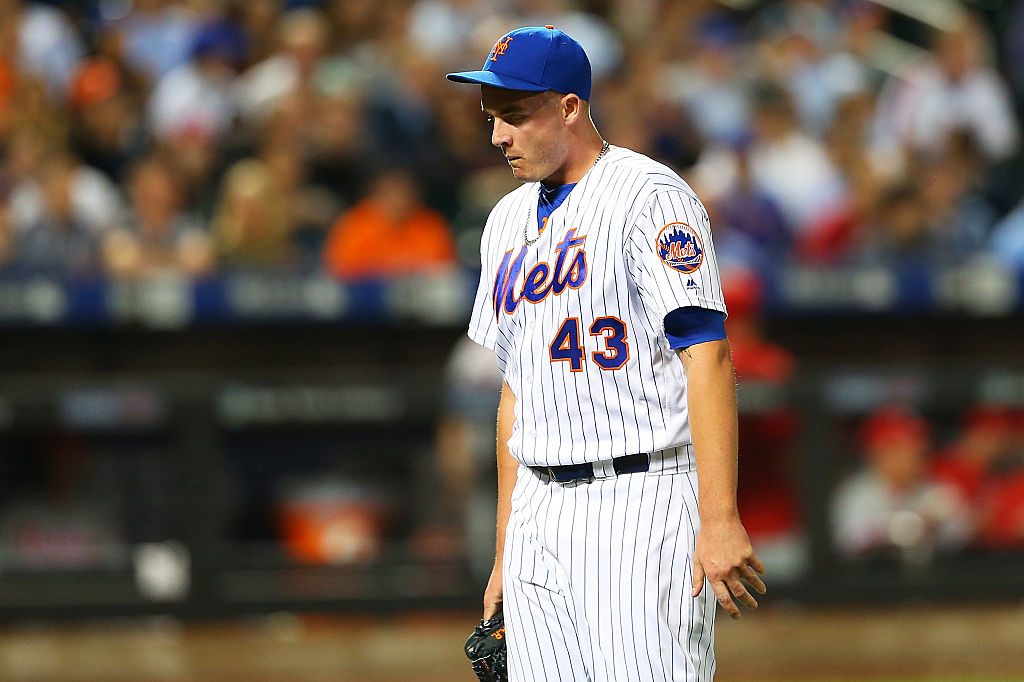 New York Mets Could Be Active Sellers at the Trade Deadline

The New York Mets needed a good finish to the first half in order to maintain the hope of a second half turnaround. That didn’t happen, as the Mets dropped five of their last six games to fall eight games below .500 at the halfway point of the season. Even though the Mets are only eight losses behind the Colorado Rockies in the wild card race, anything short of a 9-1 homestand, including a sweep of the Rockies, won’t be good enough to get them back in the mix. The Mets will in all likelihood be selling off veteran players at the trade deadline, particularly those whose contracts are expiring after the season.

NEW YORK, NEW YORK – SEPTEMBER 22: Addison Reed #43 of the New York Mets walks off the mound after Maikel Franco #7 of the Philadelphia Phillies connects on a three run home run in the eighth inning at Citi Field on September 22, 2016 in the Flushing neighborhood of the Queens borough of New York City. (Photo by Mike Stobe/Getty Images)

The Mets do have a lot of veterans to shop, but their most attractive pieces that they appear willing to move are closer Addison Reed and outfielder Jay Bruce. Lefty Jerry Blevins would also fetch a good return, but with the Mets holding a team option on him for 2018 they appear more likely to keep him for a potential resurgent season next year. Reed is the most attractive chip the Mets have by far since he is a dependable relief pitcher in a pitching starved market, so there is no reason the Mets couldn’t get a quality prospect in return for his services. The Mets have already hinted that they won’t deal Reed to the closer needy Washington Nationals, which could take the most desperate team off the board. Reed would also be a good fit in the Bronx as the New York Yankees have already committed to buying this summer and need help in the bullpen, but it remains to be seen if the Mets are willing to help their cross town rivals out. The Los Angeles Dodgers, Arizona Diamondbacks, and Boston Red Sox could also be in the mix for Reed’s services.

The other intriguing player who is likely to get dealt is Bruce, who is on pace for career highs in homers and RBI’s. The Mets opted not to trade Bruce for low ball offers over the winter and will likely be rewarded with a higher return now since Bruce has been very productive, swatting 23 homers and driving in 59 runs in 81 games. The problem is that there aren’t a ton of teams who have a need for a corner outfielder right now, an issue that is further complicated by Bruce’s limited no trade clause. Joe Giglio of NJ Advanced Media notes that Bruce can veto trades to the Yankees, Athletics, Phillies, Marlins, Blue Jays, Rays, Diamondbacks, and Twins. Most of those teams wouldn’t be a good fit for Bruce anyway, but it does limit the Mets’ leverage since he can scuttle trades to a few teams that could use him, like the Twins and Yankees. One team to watch in the Bruce market could be the Rockies, who could use an upgrade in right field over the slumping Carlos Gonzalez.

The Mets have several other players they could look to move out as well, but none of them will command a return as good as Reed or Bruce. Curtis Granderson’s hot streak has boosted his trade value, and he could land the Mets a mid-level prospect if they decide to send him into a pennant race. First baseman Lucas Duda should also be of interest to teams in need of first base help, like the Yankees and Seattle Mariners. Second baseman Neil Walker is due off the disabled list in the next couple of weeks and could find himself on the move during the August waiver trade period. These moves would be solid choices to help the Mets add some prospects to their farm system ahead of another run at the playoffs in 2018, but the market won’t really heat up until about a week before the deadline.