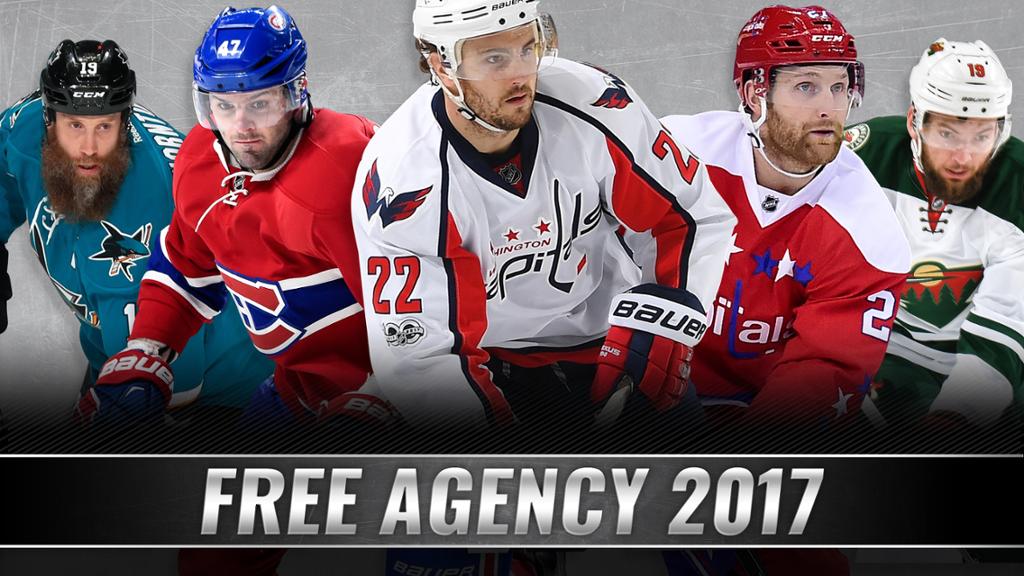 If the summer of Free Agency was a pool, the Bruins spent the time on the deck enjoying a cold beer while the other teams were doing cannonballs and making splashes. They didn’t need to get their feet wet. They just wanted to hang out, drink a little beer, eat a little BBQ and enjoy the day. While teams were signing guys like Kevin Shattenkirk to 4 year, $6.9M AAV contracts – Boston was happy to re-sign a few depth players and a couple under-the-radar guys in Paul Postma and Kenny Agostino.

While it didn’t directly address their issues (left handed defensemen [LHD going forward] and wing positions), there are still some free agents that will be incredibly low-risk, high-reward type signings. My goal today is to target a few of those guys that could help the Bruins while still allowing the young guys like DeBrusk and Bjork to learn the professional game.

Before we get into the free agents, I want people to temper their expectations of the kids. Remember that most of them that are projected to be on the main roster (DeBrusk, Forsbacka-Karlsson, McAvoy) have barely played in the NHL. McAvoy has had the longest stint with six games while JFK has played one and DeBrusk none. From what I’ve seen on Twitter, a lot of people are getting wrapped up in the excitement that these guys bring – and they should – but they should also remember that most of these guys will be playing against men for the first time in their career – not young kids or college players.

And now to the free agents!

45 years old and still chugging along. You have to think at some point that Jagr’s production is going to fall off the table. Last year may have been the indicator that he’s slowing down but he still scored 16 goals and almost hit 50 points with a Florida Panthers team that underachieved.

Jagr has already had a run here in Boston and had 9 points in 11 games in the regular season while amassing 10 points in 22 games during their 2013 Stanley Cup Final run (all assists).

Still, Jagr on a one year contract makes a ton of sense for the Bruins. It allows them to use him as either a second or third line winger. Ideally, you’d like to stick him with David Krejci and David Pastrnak while Jake DeBrusk can take third line minutes to get used to the game. Once DeBrusk has his feet under him, you can either switch the two and give DeBrusk the second line minutes or leave Jagr where he is if he’s playing well with Krejci-Pastrnak. (This, of course, is under the assumption you’re keeping Backes with Bergeron-Marchand).

Another veteran guy that could come in and be used in both a mentoring role and a second or third line slot.

Don’t get me wrong – Iginla isn’t the player he was when he was in Boston. Since he left the Bruins, his goal totals dropped from 30 (BOS) to 29, 22 and finally 14 combined in Colorado and Los Angeles. However, Iginla still managed to log 15+ minutes of average ice time during the season. The question on the table is about his production. Is it a product of him getting older or the product of a Colorado Avalanche team that just didn’t seem to care about playing hockey? Looking at his Los Angeles production, you can make the case he just didn’t fit.

What he brings to the table for Boston is a heavy, David Backes-esque type of play. He is your prototypical power forward-type in the NHL and he is familiar with the way Krejci plays (if you went the second line route). He could also be used to open up space for a guy like Pastrnak.

Unfortunately, I don’t believe that Iginla is going to live the “Jagr lifestyle” of being able to be effective into his mid-40’s. If Boston is going to make a second run at Iginla, it will be for a year or two until DeBrusk is ready.

Hudler could be an under-the-radar type of move that could really help Boston fill that winger position. The problem with Hudler? His health.

Hudler hasn’t played a full season since 2014-2015 when he played 78 games (it’s close enough, really), In 2015-2016, Hudler played a combined 72 games for Calgary/Florida, but last season he only played 39 games due to a mysterious virus. Once Hudler came back he was average with Dallas. In 32 games, he amassed 11 points.

Hudler would slot more in a third line role than a second line role, but could play along side Krejci-Pastrnak while DeBrusk gets his legs under him.

WINNIPEG, MB – OCTOBER 25: Drew Stafford #12 of the Winnipeg Jets skates down the ice during first period action in an NHL game against the Minnesota Wild at the MTS Centre on October 25, 2015 in Winnipeg, Manitoba, Canada. (Photo by Marianne Helm/Getty Images)

I’m not going to lie to you guys, I was a little surprised when I heard the Bruins would be walking away from Stafford. Stafford was a sneaky good trade at the deadline last year for the Bruins. He helped fill a role that Matt Beleskey and Jimmy Hayes could not. In 18 regular season games with the Bruins, Stafford gathered 8 points, split between four goals and four assists. He also had two goals during the playoff series with Ottawa.

From Bree after the trade deadline:

This whole “Drew Stafford on a new team comes out hard and scores goals and makes great plays” thing that we saw last night is exactly what he did when he was traded to Winnipeg from Buffalo. This version of Drew Stafford we witnessed last night hasn’t been seen in Winnipeg for quite some time now but let me tell you this: he started off red hot in Winnipeg too. Goals, assists, hard hits, beautiful plays, all of it right after the trade. Now granted he did have an injury that impacted his play but at the end of his time with Winnipeg he was logging 4th line minutes and struggling to keep up. I don’t want to presume to know that this is how he’s going to be in Boston, but I’m cautious with Stafford because I’ve been fooled once before

The Buffalo Sabres Bruins killer himself.

Vanek was having a decent year in Detroit (23 points in 48 games) before they decided to cut bait with him and send him to Florida. When healthy, Vanek was quite productive – but his health has been an issue.

The problem with Vanek is that he’s always looking for the big pay day. In 2014, Vanek signed a three year deal with Minnesota that carried an AAV of $6.5M. The Wild bought him out after the 2015-2016 season and he signed with Detroit for $2.6M for one year. While that doesn’t seem like much, he was still getting paid from the Wild buyout, which could be why he signed for less to play for one year in Detroit.

In Florida, Vanek slotted on the second line with Nick Bjugstad and Reilly Smith so it is possible he could still play a second line role in Boston. The biggest concern with Vanek? His average time on ice decreased from 15:37 in 15-16 to 14:24 in 16-17. While playing 14+ minutes in Detroit, Vanek on saw an average of 13:54 minutes per game.

That could deter Boston from making a serious offer to Vanek.