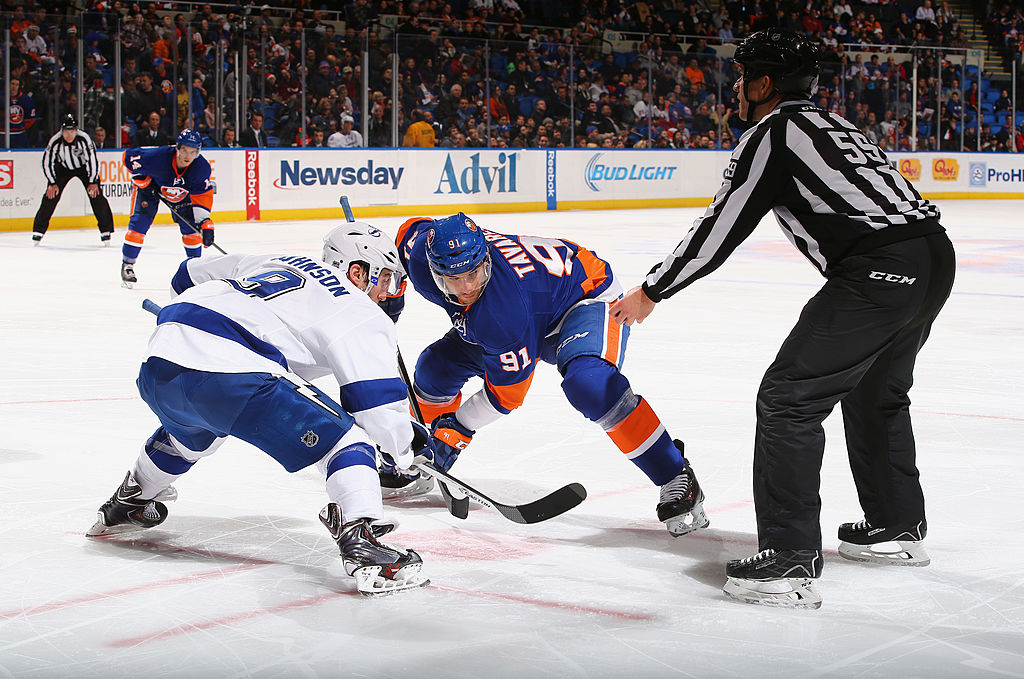 It has been suggested by many, including Sportsnet’s Elliotte Friedman and New York Post writer Larry Brooks, that the Tampa Bay Lightning will package their newly re-signed duo, Tyler Johnson, and Ondrej Palat in a deal that would bring New York Islanders superstar forward John Tavares to Tampa.

Lightning GM Steve Yzerman would be derelict in his duties if he wasn’t aggressive in trying to bring Tavares to Tampa Bay if the Islanders cannot sign him.

Tavares has one season left on his $5.5 million cap hit contract. It is rumored that he is unhappy with the Islanders direction and will not re-sign with them. UNIONDALE, NY – DECEMBER 17: John Tavares #91 of the New York Islanders skates with the puck against Tyler Johnson #9 of the Tampa Bay Lightning during their game at the Nassau Veterans Memorial Coliseum on December 17, 2013 in Uniondale, New York. (Photo by Al Bello/Getty Images)

Tavares tallied 28 goals and 66 points last season. T he Islanders certainly will not let what happened with Kyle Okposo happen to Tavares. New York lost Okposo to Buffalo without getting anything back. Brooks believes the Isles will be sellers at the trade deadline and will do everything possible to not lose Tavares without getting something back. The Islanders are in the same position the Lightning were with Steven Stamkos a year ago. Because the Bolts roster was chocked full of talent and their Stanley Cup window was still open, they were able to sign Stamkos for eight years.

Tavares’ situation is quite different as the Islanders are struggling to remain consistently competitive and he may be looking to move on to a contender.

A deal including Johnson and Palat would make sense in three ways. Each has a new, no-movement clause that kicks in next July. If  Steve Yzerman has any ideas of trading the pair for a superstar like Tavares, it would have to happen before July 2018.

Tavares will probably be looking for a contract in the range of $10 million AAV and Johnson and Palat’s new deals total $10.3  million AAV combined, making the trade work financially.

Also, the no tax state of Florida would certainly be attractive to Tavares.

Is the speculative price to acquire Tavares too much?

While Johnson and Palat are highly thought of, fan favorites in Tampa Bay, their offensive production is no match to John Tavares‘ individual numbers. The Islanders captain has skated in 155 games, scored 61 goals and accumulated 136 points while earning a +10 rating over the past two seasons. The sky’s the limit for Tavares if he were to play alongside the Lightning’s deeply talented group of forwards. It is fun to think of a power play unit of Stamkos, Tavares, Kucherov, Victor Hedman and Anton Stralman.

With superstars like Stamkos, Kucherov, Tavares and Hedman playing for Tampa Bay, the Lightning could stand up to a lineup like the two-time defending Stanley Cup champion Pittsburgh Penguins ice featuring Sidney Crosby, Evgeni Malkin, Phil Kessel and Kris Letang. The Bolts also could roll out a lineup favorable to the Chicago Blackhawks with Jonathan Toews, Patrick Kane and Duncan Keith.

Ultimately, if you can get John Tavares and make it work financially, you do it, almost no matter what the cost. He’s a generational player and added to a roster that already includes Stamkos and Kucherov, if nothing else, is exciting to ponder.

Don't Miss Out on the Aventus ICO

If you know anything about companies, the stock market, and investing, you’ve probably heard of the term “IPO”. These initial public offerings give the public...