Checking In: The Defence 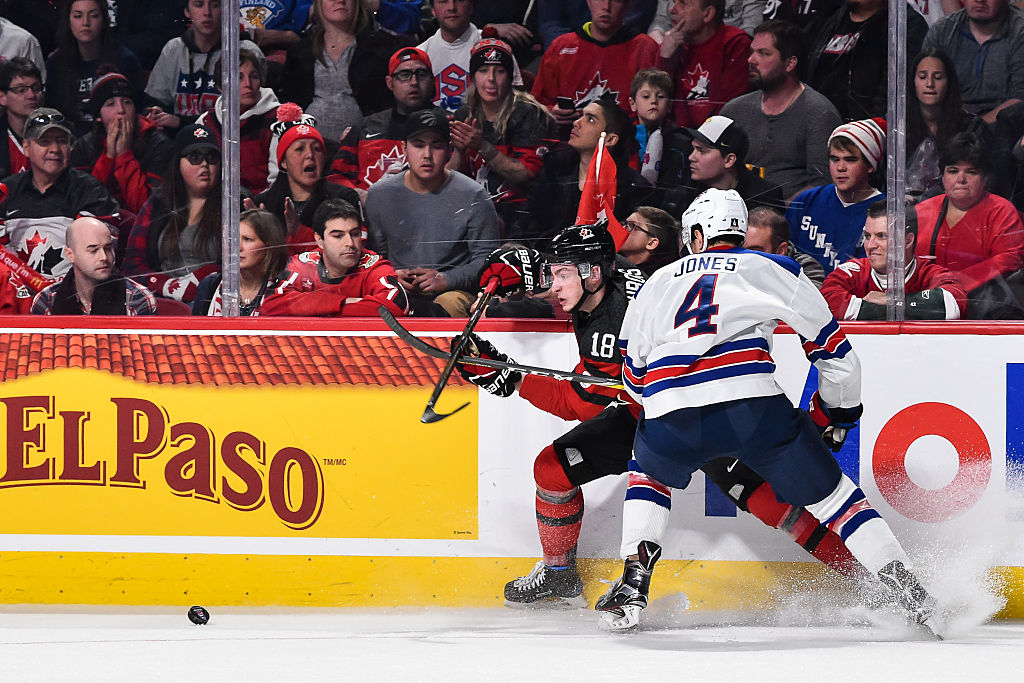 Checking In: The Defence

Is hating summer months a normal thing for a 17-year-old?

If it isn’t, well then consider me one very odd teenager.

The lack of NHL hockey, more specifically Oiler hockey, has been driving me insane. Considering this was a rather quiet offseason for the club, with a few transactions here and there, we as a fanbase haven’t had that “WOW” moment that the past two summers provided us. We are forced to debate the Kris Russell contract, gush over some kid named Connor, and wonder how big Leon Draisaitl’s ego must be. It kinda sucks.

Well, maybe not EVERYTHING. If you wanna get away from the major storylines of the offseason, the perfect place to venture towards is the ever-growing prospect pool that the Oilers are currently boasting.

Prospects have always been a fascinating aspect of professional sports and the NHL is no exception. There is something intriguing about watching future NHL players before they make it big. Perhaps it’s the unpredictability that every prospect brings along with them, and how some can go their entire junior career without anyone batting an eye at them. Or maybe it’s the thrill of finding a diamond in the rough and boasting how you knew this kid would be great before everyone else. All I know is that the Edmonton Oilers do have a few blueliners of interest in their possession that are, for a lack of better word, intriguing!

Let’s give them a little summer check in, why don’t we:

Let’s start it off at the top of the food chain.

When I last checked in on Bear, he was lighting it up in the WHL….and since then he has continued to add to resume. Since that publication in February, Bear has done the following:

That is quite an impressive list of achievements for the 19-year-old. Lost in all this is the fact that Bear did suffer an injury in the WHL final series against the Kelowna Rockets, reportedly breaking his hand. He did play in the Memorial Cup despite the injury, however, and it led to him having a fairly lackluster showing throughout the tournament. This, of course, shouldn’t come as a surprise to many…a broken hand is hard to play hockey with.

Ethan Bear will play his first season with the Edmonton Oilers organization next year, most likely for their AHL affiliate in Bakersfield. He will be one of the players to keep a close eye on in training camp. The team has been looking for a true offensive defenceman for some time and the early reports on Bear have been very encouraging. He’s the top defensive prospect in the pipeline and it will be interesting to see how he handles the next step in his development.

Seth Jones’ younger brother has been making a name for himself in the dub.

The Portland Winterhawks defenceman celebrated his 20th birthday last month and will be joining Ethan Bear for his first professional season with the Edmonton Oilers organization this fall.

Upon entering the WHL in 2015/16 Jones has had himself a successful tenure in Portland. He led all rookie defencemen in points in his first year with 55, and then followed that up with a 62pt campaign in 2016/17. That was good enough for 6th among WHL defencemen this year.

While there is much to be said about the offensive prowess of Jones, he is also praised for his play in the defensive end of the rink. His 6’1″ frame allows him to bring some respectable size to the table and, when combined with a good work ethic, can be a reliable defender. His skating is also another impressive part of his game and makes it hard for attackers to beat him in 1-on-1 situations. All this allows for Jones to be a very talented defender that can play a sound 2-way game.

While Jones isn’t expected to crack the NHL lineup just yet, it will be interesting to see how he shows in training camp this fall.

The Russian enigma that is Ziyat Paigin will be making his North American debut this year.

Having spent the last few seasons in the KHL, it has been hard to gauge Paigin’s development in recent years.

Drafted by the Oilers in the 7th round of the 2015 draft, the towering 6’6″ defenceman has had to battle injuries and an array of up and downs.

Last season he split time with AK Bars Kazan of the KHL and Bars Kazan (Yes, there is a difference) of the VHL. In the KHL this year he posted very subpar numbers, only putting up 4pts in 17 games. However, he did suffer an injury that might have hindered his play in 2016/17. The most interesting part of his story is the fact that he is only one year removed from an all-star worthy season with Sochi HC. During the 2015/16 season, Paigin was able to muster an impressive 27pts in 37 games with the club and received all-star recognition.

Despite all the peaks and valleys in his KHL career, Paigin has been praised as being a force to be reckoned with on the blueline. His massive 6’6″ frame does plenty to help  with that fact but, he also possess a variety of offensive skills. His shot is said to be very underrated and he moves exceptionally well for a player of his size. Some speculate that his drop-off in production could be linked to differing philosophy between AK Bars Kazan and Sochi HC.

The Russian defender signed a ATO with the Condors in April of this year, where he played 5 games, posting a penalty and a -4 rating. Paigin will be making an appearance at Oilers training camp and I believe he has the potential to be the surprise player.  Only time will tell what the future holds for this talented wildcard.

These are the 3 prospects that I believe, at the moment, are the biggest stories on the blueline for the future! All of them have had success at their current level of play and will be eager to make an impression in training camp this September. Whether they make it or not? Well, that’ll be the next chapter in their stories…

What do you think of these 3? Let me know in the comments!