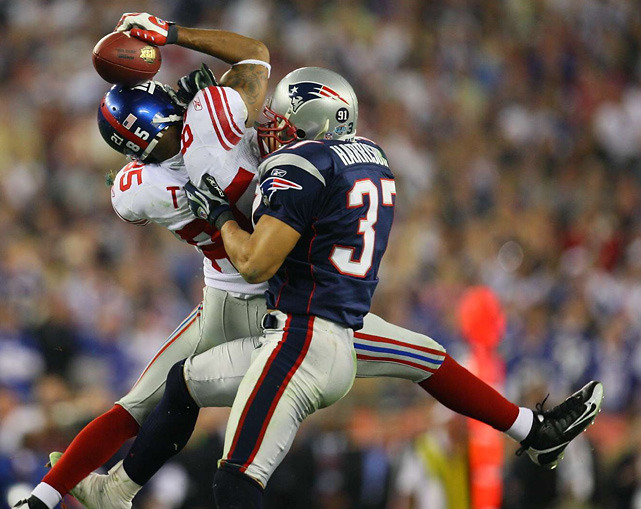 ‘On any given Sunday’ is the NFL’s unofficial mantra, and also why so many tune in every Sunday (and Thursday and Monday and sometimes Saturdays) during the season.

Here are seven surprising NFL wins that encompass that mantra fully and keep us watching in hopes of seeing the next unforgettable game.

Early in the Super Bowl era it was a common belief that the AFL was inferior to the NFL, as evident by the latter’s easy victories in the first two Super Bowls. The third Super Bowl looked like it was going to go a similar route, with the 13-1 NFL champion Baltimore Colts listed as huge 18-point favorites against the 11-3 AFL champion New York Jets. Never one for humility, Jets quarterback Joe Namath went ahead anyway and predicted a New York upset victory. Even though he didn’t throw a single touchdown pass, Namath’s confidence helped carry New York to a 16-0 lead in the fourth. Despite a late Baltimore touchdown, the Jets held on to deliver on Broadway Joe’s bold claim.

To be fair, the game as a whole wasn’t that surprising: it was a largely defensive affair that remained scoreless into the third quarter. Down two field goals, Oakland finally got enough going to score and take a 7-6 lead with 1:13 remaining. Things quickly stalled and turned desperate for Pittsburgh. On fourth and ten at their own 40, quarterback Terry Bradshaw threw a pass toward running back John Fuqua. What exactly happened next has been subject to debate by fans and physicists (seriously) alike for decades. The ball seemed to simultaneously hit Fuqua and Oakland safety Jack Tatum, then ricochet into the hands of the Steelers’ John Franco. The burly fullback improbably plucked the ball out of the air and raced to the endzone for the winning score in what is now called the Immaculate Reception.

Playing the rest of the 1993 AFC wild Card game seemed like a mere formality for Houston, who was up 38-3 in the third quarter against Buffalo. But even as Bills’ fans began to leave the stadium, strange things started to occur. Some bounces finally started to go Buffalo’s way in the form of turnovers, uncalled penalties, and even a favorable shift in the wind. The Bills slowly chipped away at the lead and eventually took it with three minutes left. Houston answered with a game-tying field goal, but by this time the momentum was Buffalo’s, who had Doug Christie kick the game winner to cap what remains the NFL’s largest comeback ever.

Just in their second year of existence, the Jacksonville Jaguars snuck into the playoffs with a 9-7 record. They then survived a close wild card playoff game to earn a shot at the AFC #1 seed Denver Broncos. Early on, things went as expected for the 13-3 Broncos who took a 12-0 first quarter lead. But the 14-point underdog Jags surged back with 13 points of their own with momentum that Denver couldn’t seem to stop the rest of the game. Mark Brunell threw for 245 yards and two TDs while Natrone Means rushed for 140 and a TD in what remains the highlight of the Jaguars’ history and one of the biggest NFL playoff upsets ever.

After both team kicked go-ahead field goals in the final two minutes of this 2000 AFC Wild Card Game, it looked like Buffalo was going to be the ones advancing to the divisional playoffs. With :16 seconds remaining they kicked off to Tennessee’s Lorenzo Neal. In a play that the Titans practiced all season, Neal handed the ball to Frank Wycheck who then threw the ball laterally across the field to Kevin Dyson. With no Bills in his path, Dyson ran down the sideline and in for the score with just seconds remaining. After a long review on whether or not Wycheck’s pass went illegally forward or not, the call was withheld and the Music City Miracle was official.

It was a tale of two different teams, though most thought Super Bowl XLII would be a contest of just one. The undefeated Patriots were seeking perfection against the 10-6 wild card Giants as one of online sportsbooks’ largest betting favorites (-12) in Super Bowl history. Many forget that the Patriots won the teams’ first encounter by just three points in the regular season finale. What they don’t forget is the Giant’s final go-ahead drive that was punctuated by one of the greatest catches in NFL history. On third and five at their own 44, Eli escaped two sacks and heaved a pass downfield to David Tyree, who improbably pinned the ball between his helmet and hands. Several plays later, New York would score to pull off the unbelievable upset.

Anyone that’s followed the NFL the past 20 NFL years has seen the Patriots pull out innumerable clutch performances, but the daunting challenge they faced in Super Bowl LI seemed impossible even by their standards. Down 25 points in the third quarter to Atlanta, the Falcons had an estimated win probability of 99.8%. But as we should all expect by now, Brady and the Pats went on to stage a comeback for the ages and force overtime. There, New England got the ball first and put together a 75-yard touchdown drive to cap a comeback that broke or tied 30 NFL and Super Bowl records.

Just in time for the opening of Eagles Training Camp, GK Brizer SPEAKS!!! “An open brief (NH) to the BORED from BRIZER: One day,..and that...