How Can We Get Kyrie to Minnesota? Three Potential Trade Scenarios 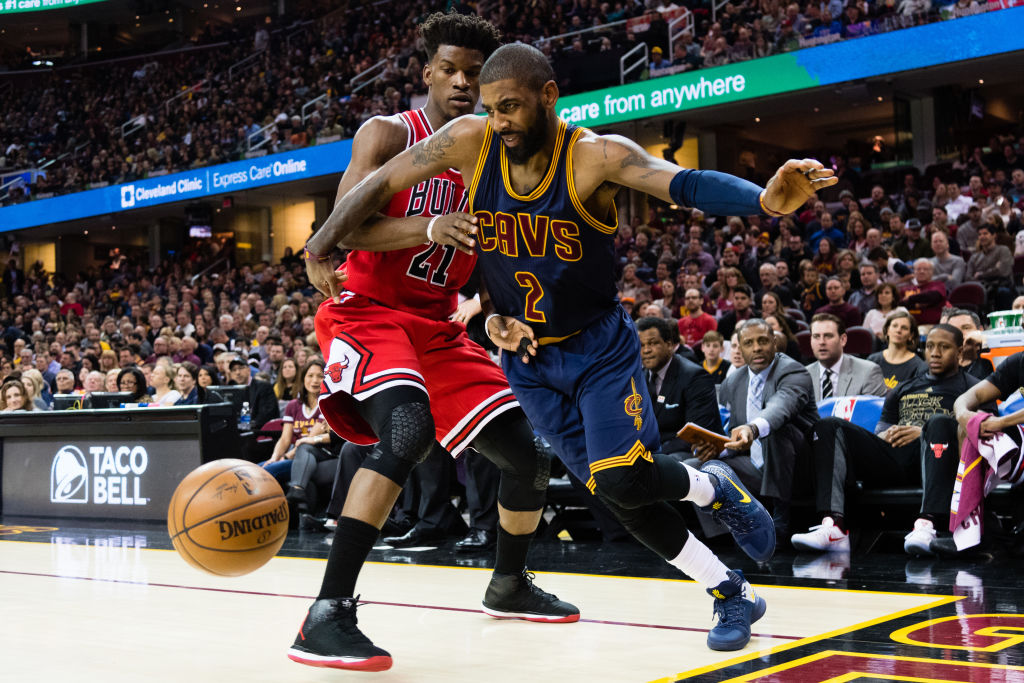 How Can We Get Kyrie to Minnesota? Three Potential Trade Scenarios

Over the last 36 hours, we’ve seen plenty of news about Kyrie Irving wanting out of Cleveland.

His rumored preferred destinations include the Timberwolves…wait, what?

The Minnesota Timberwolves, 13 years into the league’s longest playoff drought, are apparently an ideal destination for a 25 year old NBA champion and 4x All-Star.

After Tom Thibodeau brought in Jimmy Butler on draft night, all the pieces began to fall into place to end the devastating drought for a fan base desperate for a taste of success.

Fast forward to the present day and the Wolves front office, media, and fan base are all running scenarios through their minds of how they could pair Irving with franchise stars Karl Anthony-Towns and Jimmy Butler.

How can this deal get done?  Three deals ranging from less than ideal to downright outlandish (in no particular order, you decide…) are as follows:

Imagine a scenario where the Timberwolves could retain Andrew Wiggins and still find a way to bring Kyrie Irving into the fold. This proposed trade requires an understanding from the Knicks that they are not yet near their window of contention.

Kristaps Porzingis is 21 and Frank Ntilikina is 18.

Infusing this roster with too much top end talent will both take the ball out of their hands and prevent them from stockpiling future assets, which is the only time-tested way to build a solid foundation.

Despite the appeal of national attention and increased revenues for the Knicks organization, they need to strongly consider rebuilding their ship the right way.  They need to fill out their roster with high character players that can nurture the growth of their young cornerstones.  They also need as many highly coveted draft picks as they can get their hands on.

In this deal, Cleveland gets Carmelo to play alongside the King in a desperate attempt to sell him on staying home in his free agency decision next offseason.

The Wolves?  Well, the Wolves bring in a young superstar AND shore up depth issues at the wing.

Bringing Shumpert into the deal both allows the salaries to match and brings the talented wing defender to the Timberwolves bench that is so sorely needed.

This is likely the kind of deal Cleveland is probably looking for. They receive a budding star in exchange for their spurned centerpiece in Wiggins.  They also get a talented big who can slide into both frontcourt spots on a reasonable contract.

Opportunity cost is high here for the Wolves.  Not only do they grapple with the difficult decision to potentially move on from Andrew, they would need to include Gorgui to make contracts match.

Does Kyrie’s undeniable value outweigh the upside and depth provided by Wiggins and Dieng?

Honestly, I don’t think so.

Does the unstable Cleveland FO sense their empire coming to an ugly end? With Kyrie reportedly wanting out and Lebron potentially on his heels in 2018 free agency, maybe Cleveland sees the writing on the walls.  It’s time to get future value for their star pieces of today.

Lebron gets to kick back in Tinseltown.

Cleveland gets their most recent first overall pick back in Wiggins, a solid point guard talent in Clarkson, a cheap stretch four in Bjelica, and the expiring contract of Brook Lopez.

In addition to respectable players returned to “The Land” in the deal, the Cavs also get a boatload of shiny first round draft picks to restock their cupboards that Lebron stripped in his three years back in town.

For the Lakers, they get Lebron.  Not much else needs to be said there.

For the Wolves, Kyrie Irving immediately becomes the best point guard in team history and joins forces with KAT and Butler as a formidable big three.

At the end of the day, almost any deal that nets the Timberwolves a player as talented as Irving is worth considering.  Do Thibodeau and Scott Layden value future assets over Wiggins?  Can The Wolves convince the Knicks to embrace a conventional rebuild?  Is Cleveland’s front office even stable enough right now to complete a trade of this magnitude?

Time will tell.  All I know is that if there’s a deal worth making, Thibodeau ought to explore it.