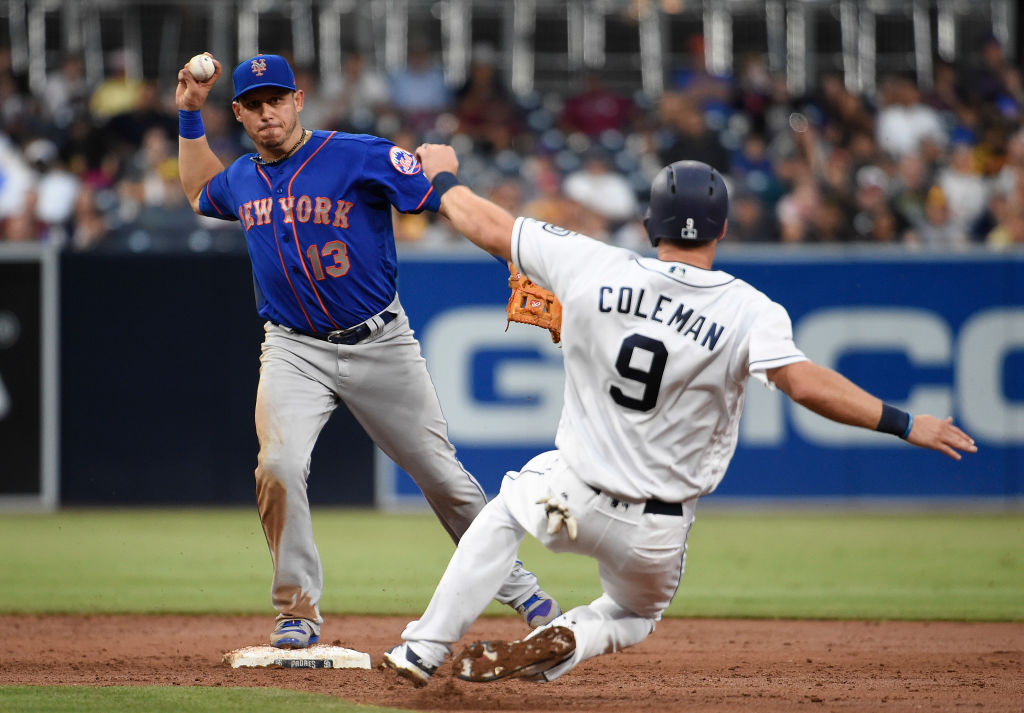 The New York Mets (47-53) began their sell off yesterday when they shipped first baseman Lucas Duda to the Tampa Bay Rays for a relief pitching prospect. The decision makes a lot of sense for the Mets, who have been a flawed baseball team all season long and lost the season series to the lowly San Diego Padres. The Mets have one final chance to showcase their trade chips before the deadline, and that comes this weekend, when they continue their West Coast swing with a three game interleague series against the Seattle Mariners (51-52). First pitch for the opener of this three game set is scheduled for 10:10 pm at Safeco Field.

SAN DIEGO, CA – JULY 27: Asdrubal Cabrera #13 of the New York Mets throws over Dusty Coleman #9 of the San Diego Padres as he turns a double play during the third inning of a baseball game at PETCO Park on July 27, 2017 in San Diego, California. (Photo by Denis Poroy/Getty Images)

The Mariners have been a bit disappointed with their play this year, checking into today’s game in second place in the American League West, but they are below .500 and trail the front running Houston Astros by 17 games in the division. The big issue for Seattle has been consistency, especially since they got off to a 21-29 start to the season. The Mariners have played well since then, posting a 30-23 record after May 27th, but digging out of that hole has left them trailing in the tough A.L. wild card race. A big key for Seattle has been the strong play of their offense, headlined by All Star Game hero Robinson Cano (.272/19/66), slugging DH Nelson Cruz (.275/20/75), emerging shortstop Jean Segura (.326 batting average/12 steals), and breakout outfielder Ben Gamel (.324/6/35). The Mariners are looking to buy at the deadline, and may even be a good match for a deal with the Mets, so they are supremely motivated to score a series victory.

The Mets will send right hander Rafael Montero (1-7, 5.19 ERA) to the mound tonight. Montero pitched pretty well in his last start, giving up three runs in seven innings against the Oakland A’s last Sunday, but suffered his seventh loss of the year due to a lack of run support. The Mariners will counter with young lefty Ariel Miranda (7-4, 4.30 ERA). Miranda pitched well his last time out, giving up two runs in 5.1 innings against the New York Yankees last Saturday, but did not factor in the decision. The Mariners went on to win the game 6-5.