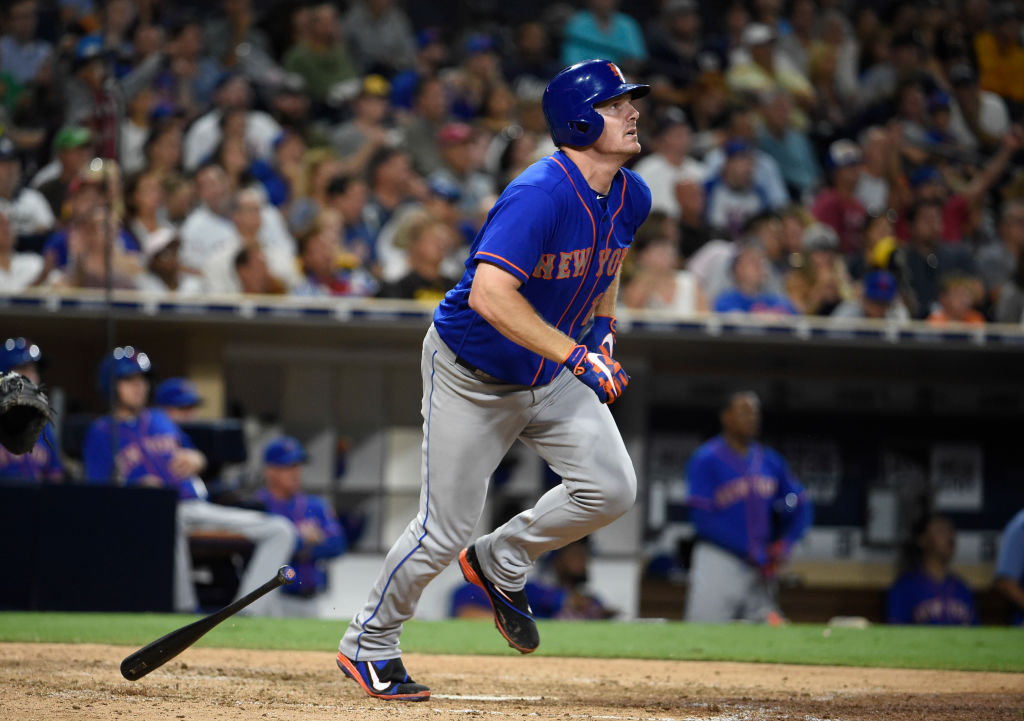 Early in the season, it looked like New York Mets’ General Manager Sandy Alderson made a shrewd move by not dealing Jay Bruce for a small return in the offseason. Despite what appeared to be a poor fit between Bruce and the Mets, the slugging outfielder has delivered one of his finest seasons in Flushing, entering play today batting .265 while leading the teams in home runs (27) and RBI’s (72). With the Mets falling out of contention, many expected that Bruce would be one of the team’s prime trade chips, landing them a better return than if they had dealt him in the offseason. With just under two days to go before the trade deadline, this doesn’t appear to be the case.

SAN DIEGO, CA – JULY 27: Jay Bruce #19 of the New York Mets hits a two-run home run during the seventh inning of a baseball game against the San Diego Padres at PETCO Park on July 27, 2017 in San Diego, California. (Photo by Denis Poroy/Getty Images)

There has been minimal interest in acquiring Bruce, as Newsday’s Marc Carig pointed out yesterday.

It makes no sense why there is so little interest in Bruce, who is having a monster season and could definitely help a team get to the postseason. Part of the problem appears to be the abundance of power in today’s game, making the upgrade a team would get from Bruce not worth the price in prospects it would take to acquire him. Bruce also doesn’t offer much else besides his power and a strong arm in right field, making him a relatively one dimensional player who is an ill fit for a reserve role on a team that already has its lineup filled.  This would explain why Curtis Granderson has drawn more interest than Bruce of late since he can play all three outfield positions and offers more postseason experience than Bruce.

If teams are going to continue low balling the Mets for Bruce, they probably will hold onto him again, which is the right move. Bruce has a high enough salary that he should easily clear waivers in August, which would allow the Mets to trade him wherever they please until the end of the month. A lot can happen in baseball in a month, and a team that suffers a devastating injury in the lineup could have much more motivation to trade closer to equal value for Bruce with the postseason so close. Even if Bruce remains in Queens until the end of the season, the Mets would have the option of extending him a qualifying offer. The qualifying offer would likely be rejected by Bruce, but it would open the door to the Mets re-signing him. The Mets have a lot of uncertainty in their lineup next season outside of Yoenis Cespedes and Michael Conforto, so having a veteran bat like Bruce in the middle of the lineup would be a huge help. If Bruce signs somewhere else after rejecting the qualifying offer, the Mets would get a draft pick as compensation for his loss, an asset that is far more valuable than two or three low level prospects.

The Mets at least appear open to the idea of bringing Bruce back next season, which would require Michael Conforto to play center field full time. Conforto has looked better than expected in center, giving some credence to the idea that having Bruce’s bat in the lineup would outweigh the negatives of using Conforto as an every day center fielder. The Mets also will have Juan Lagares on the roster to use as a late inning defensive replacement, making the situation even more tenable. Given the various potential benefits of having Bruce around beyond the deadline it makes more sense than ever for Alderson to ask for a lot in return for him. If a team doesn’t want to pay market value for a player of Bruce’s caliber, the Mets should just hold onto him and see what happens from there.