Let's not rush to conclusions on LeGarrette Blount's struggles 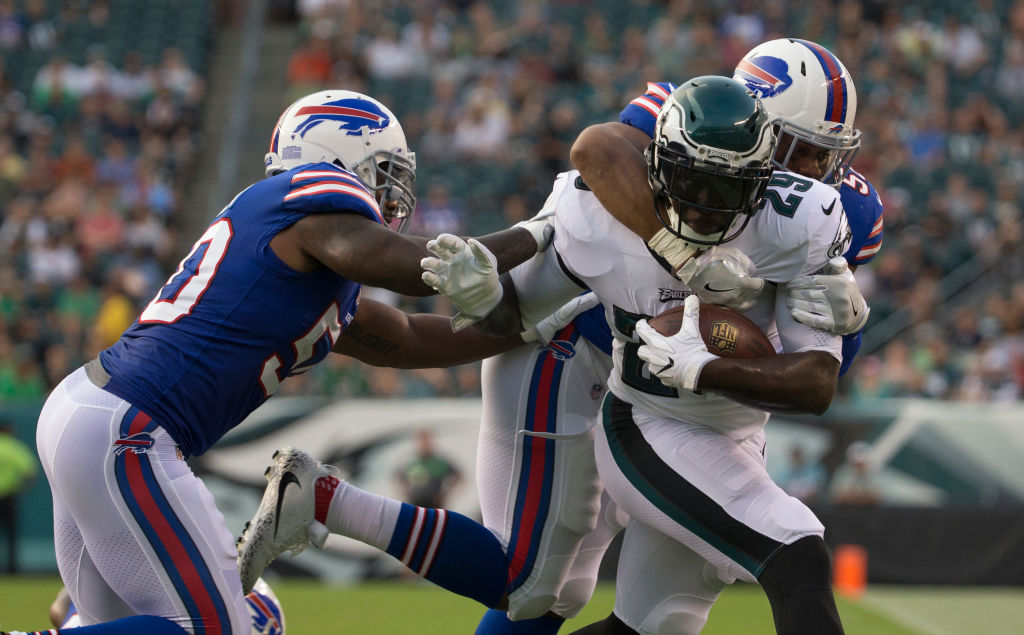 Let's not rush to conclusions on LeGarrette Blount's struggles

The NFL preseason is the ultimate breeding ground for fans and media alike when it comes to premature hot takes. It is a place where both parties can make proclamations such as this undrafted free agent should make the team or this veteran player should be cut.

When it comes to Philadelphia Eagles running back LeGarrette Blount, he falls into the latter of the two categories. The 30-year old running back signed a one-year, $1.25 million deal with the Eagles in free agency, after having a career year with the New England Patriots in 2016.

Last season, Blount rushed for 1,161 yards on 299 carries and had 18 touchdowns. He, along with the other Patriots’ running backs, helped them in their quest to winning Super Bowl 51 over the Atlanta Falcons.

Blount, who is a bruising running back, will get the tough yards, and is effective in short yardage situations. In fact, when you take a look at his splits from last season, it backs up the notion that he is a solid short yardage back.

In addition to those stats, and what he has done over his career, it is kind of puzzling to see people already writing off Blount, two games into the preseason. Thus far, the former University of Oregon product has only mustered up 17 yards on nine carries, which is not good.

However, you have to look at how the Eagles are using Blount and the current state of the offensive line, before making an irrational judgment.

To begin, the Eagles offensive line has been without both right guard Brandon Brooks and left tackle Jason Peters through the first two preseason games. It is tough to make a fair assessment of Blount when you are missing two good offensive linemen, and your current offensive line is not getting any push to create running lanes.

Along with not having Brooks and Peters, head coach Doug Pederson has been running Blount more towards the outside, and not up the middle. He is not an East-West runner, he’s a North-South runner.

One would think the Eagles would not make the same mistake as they did when they signed DeMarco Murray in free agency a couple of years ago. Former head coach Chip Kelly tried to make Murray an East-West runner, but everybody knew he had the most success running downhill.

Just based on these reasons alone, it’s easy to see why some are quick to say Blount could be on the verge of being cut. Although, we have to remember that the Eagles will be using a running back by committee system this season. Blount will be sharing touches with Wendell Smallwood, Darren Sproles, and Donnell Pumphrey throughout the season, keeping him fresh.

Also, I know there are some fans clamoring for UDFA running back Corey Clement to make the team over Blount, but we have to see more from him over these last two weeks to even be in the final 53-man roster conversation.

Let’s just pump the brakes on the Eagles cutting Blount. If he does not pan out by season’s end, his money is off the books. However, if he does pan out, then the Eagles will be a better team in the red zone.