An Appreciation of Isaiah Thomas, or, "The Smallest Man; The Broadest Shoulders" 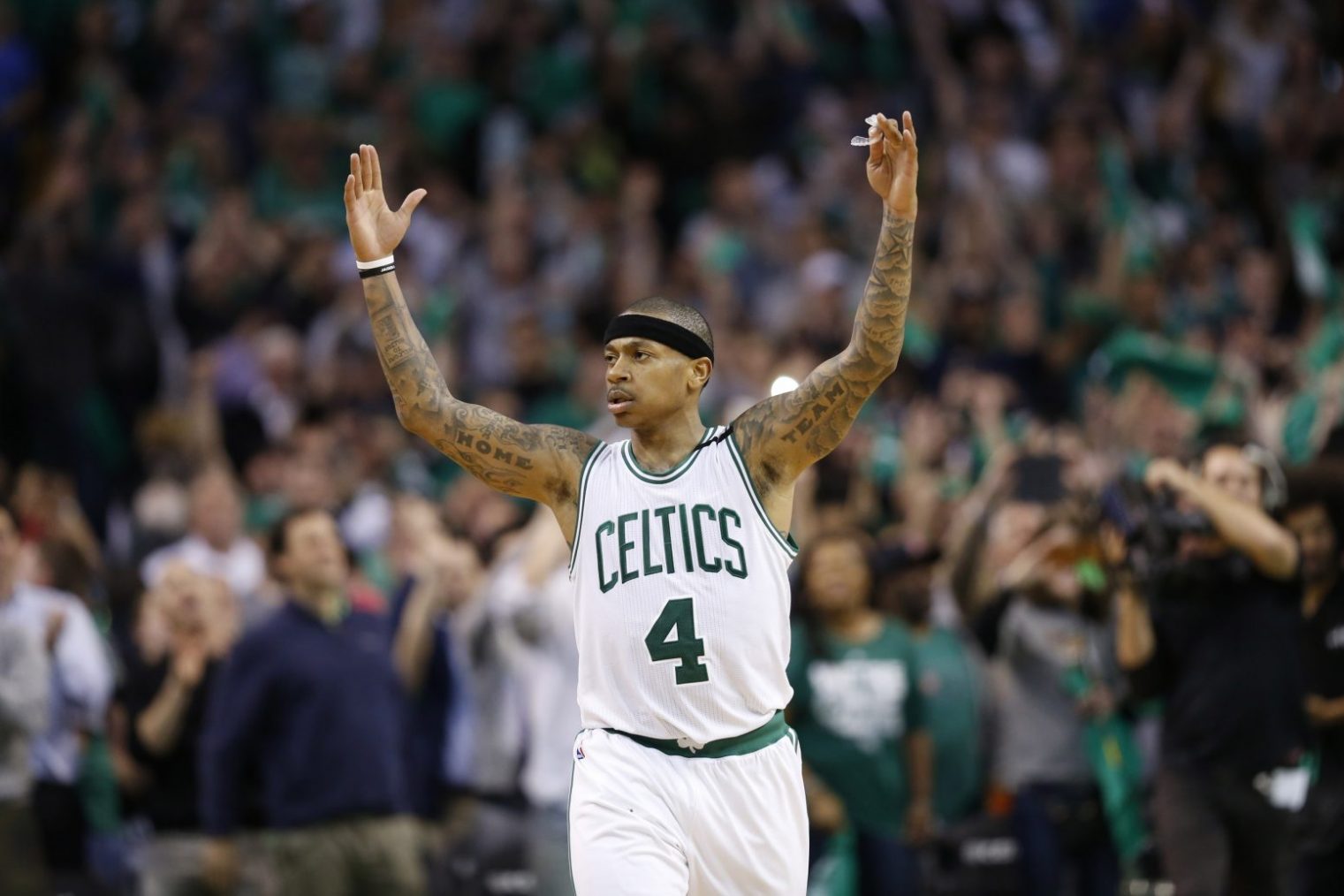 An Appreciation of Isaiah Thomas, or, "The Smallest Man; The Broadest Shoulders"

I’m not here to talk about the trade and its parameters and what they mean or don’t mean, because we already did that. I do not come to bury Isaiah Thomas in discussion of Danny Ainge’s brilliance or farcical-level stupidity (whichever you believe) or to worry about whether this means that the NBA dysfunction currently carrying the most dysfunction and rank stupidity (Kings and Knicks have cooled down, after all) is going to get Luka Doncic or Michael Porter with the 2018 Nets pick.

We gather here today to celebrate the 2.5 years that an undersized, perpetually underrated and underdrafted young NBA baller spent with the Boston Celtics. A period in which he brought the franchise back to national relevance and then, in his final year with the team–undeniably boosted by the multi-tool versatility and veteran leadership of Al Horford–putting together a historically dazzling season while bringing a definitely talented but also somewhat ragtag squad to the Eastern Conference Finals.

There are quite a few things you can say, with the confidence of one expressing truth, about Boston sports fan culture, many of which are not in the least bit complimentary. (And about this city that I’ve adopted as my hometown in general.) But one thing you can’t deny is the passionate fervor that all of Boston’s favorite Celtics players exemplified, from Big Bill Russell and Hondo, to The Hick from French Lick and Chief, to The Truth and Rondo. The ballers whom the city loved despite their lack of “RINGZZZ” success, like ‘Toine and Reggie Lewis and Avery Bradley, carried this quality as well. It’s what an alarming number of sportswriters call “grit” in a tone that often skirts around or dives directly into (depending on the context) coded racially charged language. But when players of many colors and backgrounds share it and it becomes intertwined in the sociocultural fabric of the Celtics, it’s acceptable to briefly ignore the dogwhistles of clarion callers who would corrupt this idea of toughness for their own ends–to eschew their B.S. (while never forgetting that it’s a real thing) and celebrate the “faaaahk you, guy, I’m scoring here” bravado that distinguishes it.

Isaiah Thomas had that in goddamn spades. He exuded it through the entirety of his being. The man got up for work days after the horrific, untimely death of his sister–and did all he could to make his team win, scoring 40+ points and keeping an unexpected loss from being an embarrassment. He scored a career-high 53 points (pictured above) on what would’ve been his deceased sibling’s birthday, and brought the Cs to victory in OT. If he never wins a ring or even so much as a first-team All NBA honor, he’ll always be a champion in my mind for that. Always. You will not convince me otherwise.

I highlight those moments right away because then I remember–he did things like that during the 2016-17 regular season practically every other game in which he was available to play. He bailed out a shaky defense–stemming from a roster still learning its own connective tissue, and of which he was definitely a part in a negative manner–that allowed points they never should have. He played hero ball on a tier nearby, if not always equivalent to, the masterworks displayed by Durant, Harden, Westbrook, LeBron, Curry, Kawhi, Wall, Kyrie and Lillard. He saved our asses more times than he should’ve had to. But he always brought us–most of the Celtics-loving folks I know, anyway–to moments of euphoric elation when he’d split through a four-man phalanx of defenders or pull up for a cocky-as-hell three that he knew would go in even if we didn’t. It was nothing short of inspiring.

No, he wasn’t a gift-from-the-heavens perfect player. (No baller is, not even Jordan, LeBron, Magic, Bird, Kareem, Russell and other NBA players of that caliber.) His defensive weaknesses are well-documented and need no statistical breakdown here, though it’s worth noting that he always tried to make an impact, even when the odds didn’t favor him in the slightest and his body couldn’t bear the rigors of keeping up with the Walls, Westbrooks and Currys of the world. And I can’t deny that his confidence occasionally veered into the irrational and caused him to make suboptimal decisions, or demand certain things like a Truck made by them called Brinks (which he may well get in his new home, and would’ve gotten some semblance of here if not for the hip uncertainty…but enough about that). Isaiah is a proud man, who’s been counted out for much of his amateur and professional basketball career. The chip on his shoulder rivals the size of Mount Saint Helens in his native Washington.

But going back briefly to his defense: For all of the just maligning it received, the barnstorming determination that flowed through his veins as consistent as blood and water drove him to do this kind of shit:

A man listed at 5’9″ knows, at least in the most objective/analytical part of his brain, that his effort at a chasedown block is more likely to fail than succeed. But Isaiah Thomas tried anyway, and as the video above displays, he succeeded in more than a few high-profile instances. Such actions require a certain chutzpah, colored by a perhaps not insignificant quantity of mild madness, that many people don’t have. And it’s indubitably inspiring–think of how many young kids who love the NBA but thought they were too small and then saw him and said, “Why not at least try?” Many, maybe even most, will fail. But it’s the desire to try, and the hope powering such desire, that matters. It’s what powers those whose dreams it does inspire, and brings fulfillment to those who work their asses off in spite of whatever Sisyphean odds they face. I have no doubt in my mind that Isaiah Thomas provided exactly that fire for plenty of people in numerous aspects of life. To hell with “grit”–that’s heart.

Oh, also, I didn’t even write about the tooth game. Or the 2016 win over the near-flawless Golden State Warriors at Oracle that he sealed at the last minute with his toughness and shot-making. I could write another post listing individual anecdotes, but I think I’ve made my point.

What is dead may never die, but rises again brighter and stronger. Thank you, Little Guy, and we’ll be seeing you in the Eastern Conference Finals.