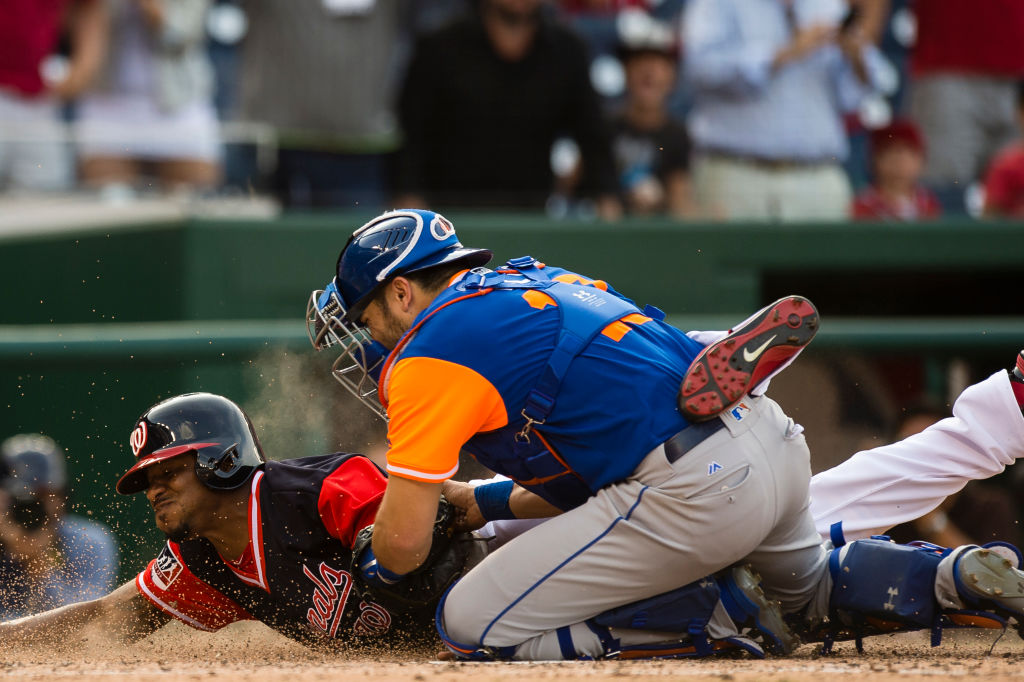 After blowing a 5-0 lead built on a three run home run by Asdrubal Cabrera and a two run home run by next season’s third baseman Wilmer Flores, the Mets stared down the barrel of another soul crushing loss. But Amed Rosario, who is still learning this game and having his missteps, smacked a high fastball over the center field fence for another late inning home run which gave the Mets an eighth inning 6-5 lead. The Nationals then spent the next two innings trying to storm the castle. Terry Collins responded by asking A.J. Ramos and his potluck slider to get a six out save as if this game meant anything.

WASHINGTON, DC – AUGUST 27: Amed Rosario #1 of the New York Mets hits a solo home run in the eighth inning against the Washington Nationals during Game One of a doubleheader at Nationals Park on August 27, 2017 in Washington, DC. (Photo by Patrick McDermott/Getty Images)

And too bad it didn’t, because the ending was worthy of an Ulti-Met Classic during a good season. Daniel Murphy, who was hit by a Jerry Blevins pitch in the eighth which should have been called back because Murphy acted like a statue, smacked a base hit to center field with a runner on first and two outs in the ninth. The ball went under the glove of Travis Taijeron, which under normal circumstances would have meant certain doom for the Mets. But Juan Lagares picked it up, fired it in to Asdrubal Cabrera who fired a strike to Travis d’Arnaud to nail pinch runner Edwin Jackson at the plate (who slid head first and tried like hell to get his arm broken). Dusty Baker desperately tried a review to say that d’Arnaud blocked the plate illegally, but Travis is way too nice for that and the Mets came away with a 6-5 victory that will be either lost to history or played incessantly over the winter and beyond on SNY to remind us what a horrible season this has been. Too bad, really. It would have been a fun Mets Classic.

But that’s not all, because there’s a doubleheader today, and Seth Lugo is coming back from injury with six relievers used in game one, including two innings by Ramos. Good luck Seth!

(Those six relievers include “El Peñaco”)