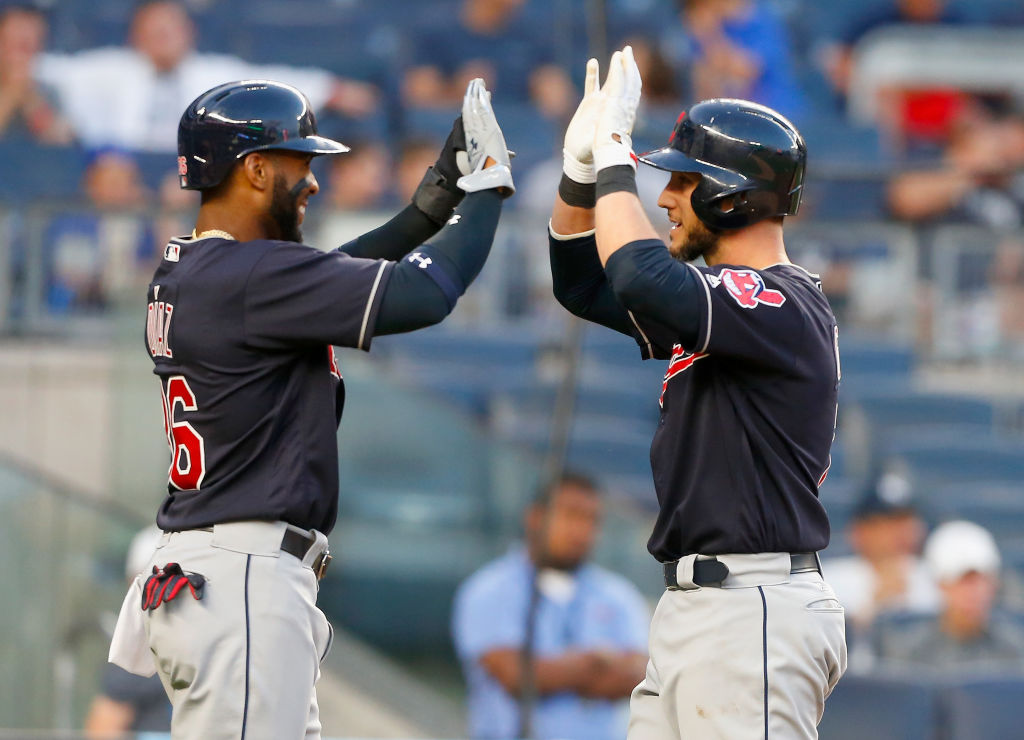 Similar to game one of this traditional doubleheader, the Indians struck early, putting four runs on the board in the first inning. After batting around the order on five hits and two walks, this gave young spot-starter Ryan Merritt a sizable lead to work with.

In the second inning, New York attempted to retaliate, adding a run off a Greg Bird single to center, scoring Aaron Judge.

Early in the game, OF Brandon Guyer was taken out after a diving catch in the fourth inning, being replaced in LF by rookie Bradley Zimmer.

The Yankees starter Jordan Montgomery regained his composure through four straight innings, giving up just another hit before being relieved after 92 pitches. The “early” bullpen, Chasen Shreve and Caleb Smith, ended up allowing another four runs to score in favor of Cleveland via Edwin Encarnacion solo (31), Austin Jackson double (14), and a two-run shot from Yan Gomes (10), putting Cleveland up seven runs above New York.

For the Tribe, Merritt pitched into the sixth inning (5.1), gave up a single run on five hits, struck out just one, Judge, in the fourth, and walked one. Relievers Craig Breslow and Joe Smith continued the trend set by Merritt keeping New York to a single run and just one hit through 2.2 innings.

Cleveland tacked on another run on a homer from Francisco Lindor (25) in the top of the eighth, the third home run from the Indians in a matter of three innings.

Top of the ninth, Cleveland put two on, no outs, from a Santana single and a walk for Yandy Diaz, urging New York to start warming reliever Aroldis Chapman in the ‘pen. The Tribe would leave both men on the corners before heading to the bottom of the inning.

In the bottom of the ninth, New York finally answered back, after Indians reliever Zack McAllister walked one and gave up a single to Aaron Hicks before Bird launched a three-run homer into the Yankees bullpen, shrinking the gap to just five runs. This is the most amount of runs given up by Indians pitching since August 24th, after only giving up a total of three runs through five games leading up to this one. McAllister closed out the game retiring the last two bats back to back for a total sweep of the Yankees.

Tonight’s game also closes out the month of August with a record of 19-9, winning 16 of their last 20, putting them 20 games above the .500 mark going into the final month of the regular season.

Let's do a #TribeTopThree for game two shall we?

1. Ryan Merritt – SP – 68%
At the beck and call of the major league squad, Merritt has been able to appear whenever needed, ready to pitch on short notice. He is the dream spot-starter that every team wishes they could have. In 2017, he’s pitched 20.2 innings and has only given up four earned runs. What I find fascinating is that his opposing average is above .300 for the season, however he’s kept the runs at a minimum (1.10 career WHIP in 26.1 IP). Merritt pitched Cleveland into the world series in 2016, showing just how dominant he can be under pressure, and since then has been able to keep that consistent form and level head at the drop of a hat.

3. Edwin Encarnacion – 1B – 11%
I’m sure you’ve gotten very used to Edwin being in our Top Three this season, as he has been able to come up big for the Tribe time and time again. In today’s game he was able push the number of home runs a bit further to 31 on the season, ten in the month of August. He showed off his bat magic going two for four with an RBI, two runs and a walk, while also flashing some of the leather on a close play at first to tag out Judge on an inning ending double play in the sixth.

Tomorrow (Thursday) is a day off, Cleveland’s first since August 7th. On Friday, the Tribe will head to Comerica Park for a day-night doubleheader to start off the four-game series. Game one of the DH is scheduled for a 1:10 first pitch, with Cleveland putting 13-6 righty Carlos Carrasco on the bump opposite southpaw Matthew Boyd who’s 5-8. For game two, Michael Clevinger will face off with Buck Farmer to start off the final leg of the regular season.