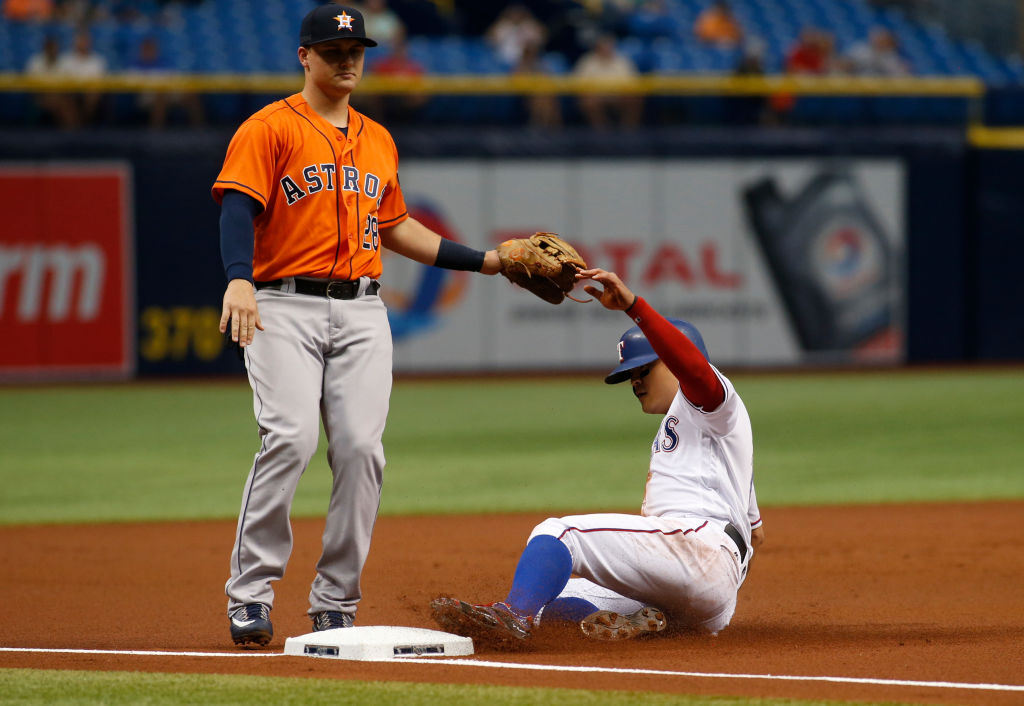 The New York Mets (58-75) had a rare Friday off day yesterday, but decided to utilize it for a good cause. The originally scheduled game against the Houston Astros (80-53) was postponed a day to allow the Astros to have a day with their families after being displaced for over a week due to the effects of Hurricane Harvey. The Mets took the day to volunteer and help with the relief efforts, a noble gesture that definitely helped out in the community. The focus will begin to shift back to baseball today as the two teams play a day/night double header for the first sporting events in Houston since the storm. First pitch for the day game is scheduled for 2:10 pm at Minute Maid Park.

ST. PETERSBURG, FL – AUGUST 31: Shin-Soo Choo #17 of the Texas Rangers advances to third base ahead of third baseman J.D. Davis #28 of the Houston Astros off of the wild pitch by Collin McHugh during the first inning of a game on August 31, 2017 at Tropicana Field in St. Petersburg, Florida. (Photo by Brian Blanco/Getty Images)

The Astros are cruising towards the postseason, holding an 11.5 game lead over the Los Angeles Angels in the American League West, but they have been battered by injuries. Shortstop Carlos Correa has missed the past six weeks with a thumb injury and the Astros have other key cogs on the disabled list, including starting pitcher Lance McCullers and catcher Evan Gattis. Houston has managed to maintain its division lead thanks to a strong offense, led by All Stars Jose Altuve (.355/21/71) and George Springer (.290/29/71). The Astros also made a big move on Thursday to bolster their rotation by landing star pitcher Justin Verlander from the Detroit Tigers. Verlander isn’t scheduled to pitch in this series but he could be a huge shot in the arm to the Astros’ chances in the postseason.

The Mets will send right hander Matt Harvey (4-3, 5.25 ERA) to the mound this afternoon. Harvey is being activated from the disabled list after missing the past two and a half months dealing with a stress reaction in his pitching shoulder. The Astros will counter with veteran right hander Charlie Morton (10-6, 3.88 ERA). Morton pitched well in his last start, giving up three runs in five innings against the Angels last Sunday, but did not factor in the decision. The Astros ended up winning that game 7-5.