Your Morning Dump... Where Loyalty has no Incentive 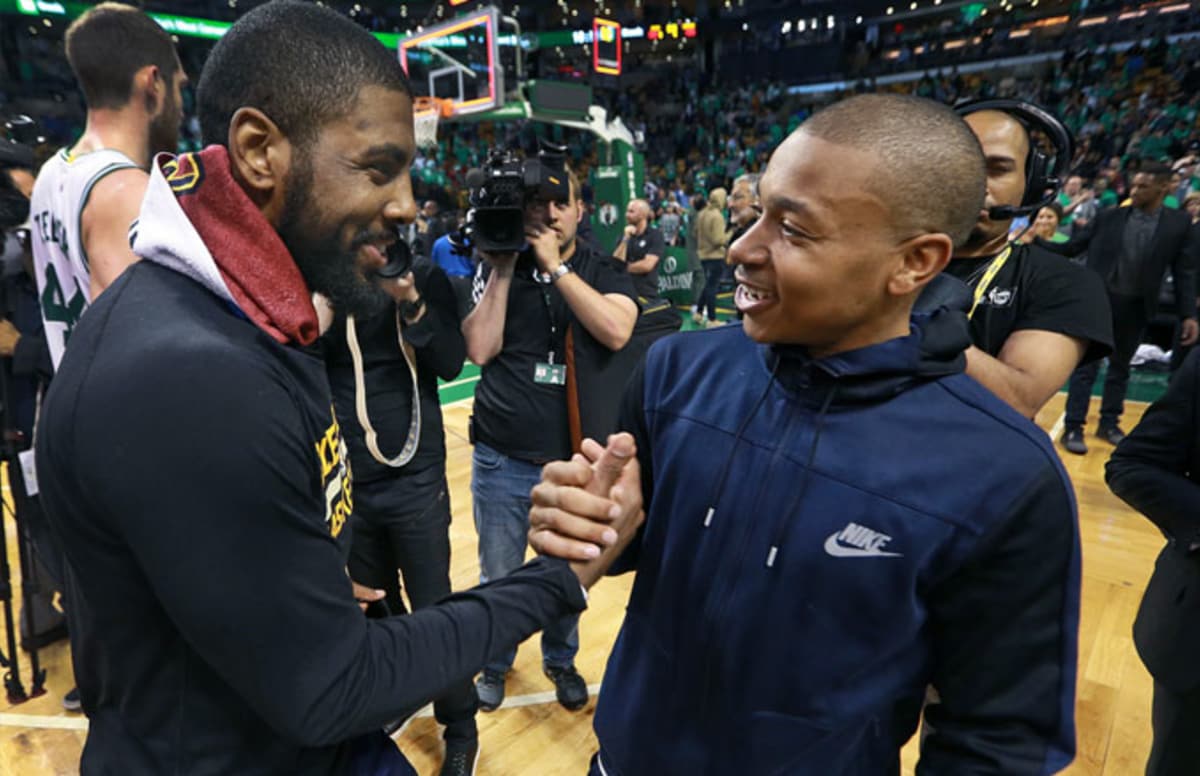 Your Morning Dump... Where Loyalty has no Incentive

Houston and Boston got considerably better, on paper. You could make the argument that Daryl Morey and Danny Ainge would be lesser general managers had they considered loyalty a good business model.

It was only four short years ago, in the summer of 2013, when Ainge traded two Celtics legends, Paul Pierce and Kevin Garnett, for a bunch of Nets draft picks and replacement-level players. My fiercely loyal Celtics-fan boss didn’t like the trade, and neither did a lot of other fans. It would’ve been easy to keep Pierce and let him fade off into the sunset after a year-long farewell tour in a Celtics uniform. Boston took a gamble on the future. No one could’ve expected the deal to work out at the level it did. The Nets died. The Celtics ascended. Here we are today.

Boston’s long web of trades and signings that started in 2013 culminated last week when Ainge acquired Irving for the 2018 Nets pick, Jae Crowder, Ante Zizic, and, of course, Thomas, who won the hearts of an entire fanbase this past season. Boston fell head over heels for Thomas after he dropped 53 points in the playoffs. “I always dream of moments like this,” Thomas said after the game. “Those are where legends are born. And one day I want to be one of those guys.” Thomas meant it, and his love for the fans was not unrequited. But to reach their ultimate goal of winning a championship, the organization had to ignore those fuzzy feelings. The way I imagine it is like this: We were all watching Thomas on one knee, wearing his Brink’s truck sandals, ready to propose for a long-term commitment to the team and the city. But Ainge stopped him before he could reach for the ring. It was just a fling all along, nothing more. Ainge dealt Marcus Thornton for Isaiah Thomas, then Thomas for Kyrie Irving. To systematically upgrade assets, you cannot let attachment be an overriding decision-maker.

“I’ll leave it to your own imaginations to realize how difficult that conversation might have been—for me and Isaiah,” Ainge said after the trade. “Isaiah had just an amazing season this year and entertained us all—the whole city of Boston, and everybody fell in love with him. You know, he’s such an underdog because of his size and his heart and his spirit in which he plays. It was very challenging to make this decision.”

In today’s NBA landscape — with max contracts, free agency, and $20 million deals handed out like candy — there’s no space for loyalty. The Isaiah/Kyrie trade reinforces that notion.

Isaiah had a heroic season, playing 76 games, averaging 28.9 points and 5.9 assists, shooting 46 percent from the field, and finishing fifth in MVP voting. He played a day after his sister tragically passed away, scored 30 in that game, and dropped 53 in the game two of the next round. He played on an injured hip throughout the second half of the season, and although playing would increase the chance of re-injury, he stayed on the court, and thrived.

Isaiah constantly spoke about the history of the Celtics organization, how he loves the city, how he’s embraced the fans, and how he wants to retire as a Celtic legend. He recruited Al Horford and Gordon Hayward, and openly talked about bringing in in more talent to Boston.

Isaiah provided the blueprint on how to carry yourself as a Boston athlete. There’s nothing more he could have done, but he was still traded.

In weeks leading up to the Kyrie Irving deal, several local outlets speculated on what Boston had to relinquish in order to acquire the 25-year-old star. People concluded that Danny Ainge wouldn’t trade Thomas. Kyrie’s a better player, but not that much better, and it would be heartless to trade Isaiah after that amazing 2016-2017 campaign.

Even the most die-hard green-teamers believe Kyrie is the superior talent. But if you asked anyone before the trade — including respected scouts, executives, and writers — they wouldn’t think the gap between Kyrie and Isaiah is equivalent to Jae Crowder, the unprotected Brooklyn pick, and Ante Zizic. Maybe in a few years, but certainly not now.

Simply, it was a ruthless move by Danny Ainge. The Celtics could easily end up winning the trade and Irving may develop into a true superstar. But I can’t remember a Boston team — including Belichick’s Patriots — making such a cold-blooded trade.

During the season, everyone joked that Danny “got soft.” He evolved past his “Trader Danny” moniker and overvalued his players to the point where he hesitated to make a blockbuster trade. Paul George, Jimmy Butler, and Demarcus Cousins were traded for bargain prices, but when Ainge saw Kyrie on the market, he didn’t care about the slight overpay.

It was the most “Trader Danny” move of his career. The trade for Garnett, the fleecing of the Brooklyn Nets, and acquiring Isaiah are Ainge’s best moves as a GM (hiring Stevens is in a different category). He saw an opportunity to improve the long-term ceiling of the franchise, and even if it mean trading Isaiah — a guy whose embraced the Boston ethos and was beloved by fans — Danny would pull the trigger.

Kevin Durant and LeBron James were heavily criticized for having “no loyalty” towards the teams that drafted them. Some people felt similarly about Hayward leaving Utah. It’s easy to attack the individual for not being loyal to their team, but when the organization doesn’t reciprocate that loyalty to the player, it’s simply seen as a “business move.”

I’m beyond excited to see what Kyrie can accomplish in a Celtic uniform. But the trade still stings, mostly because of my attachment to Isaiah. Every Celtic fan should hope he recovers quickly and eventually inks a brinks-level contract next summer.

Page 2: Where a Surgeon Provides New Insight On Isaiah’s Hip

“When you have a labral tear from impingement, that means that the way that Isaiah Thomas’s hip is shaped, it’s shaped in a way that’s not round,” Ochiai said. “In certain positions, his hip is not round on round. That’s why it’s called impingement, the bone will impinge because it’s not a round-on-round joint. Once you tear your labrum from that, that’s the most common cause of labral tears in any athlete, that tear is not going to heal. It’s always going to be torn, the question is how do you treat that?

“And there are some high-level athletes who are playing professional sports right now who have labral tears from impingement who are doing fine.”

Ochiai said rehabilitation without surgery consists of reducing inflammation, strengthening muscle, and “trying to get the hip to be dynamically stabilized by the muscles around the hip.”

It’s still unclear whether it requires surgery. Reportedly, Isaiah wants to take his chances with the hip and play through the season, with hopes of landing a lucrative contract next offseason.

Dr. Ochiai explains how Isaiah’s hip has structural damage. Athletes who’ve suffered this injury can continue playing, but cartilage damage can lead to more serious health risks. The labral tear will not heal, but strengthening the muscles around it can diminish chances of further injury.

Earlier in the week, Jason Lloyd of The Athletic reported that Isaiah might be sidelined until the all-star break. It would put undue pressure on Lebron, but if Isaiah performs at a high level in the postseason and final months of the regular season, he can still command a $25-30 million annual salary.

Previously, the worst-case scenario was Isaiah missing the start of training camp. This injury has everyone confused, as the reports have turned increasingly conflicting. But in the short-term, I can’t imagine this injury impacting his game. His elite production never wavered throughout the regular season or playoffs, and he was held out for the Eastern Conference Finals so he wouldn’t reaggravate the hip, not because there was another setback.

This news has significant bearing on the new-look Celtics. If Isaiah misses substantial time, the Celtics have a clear path to the #1 seed, but the Cavs will probably earn it if Isaiah returns within the first few months of the season. Cleveland can still improve their roster, as they’ve begun to seek trades for the newly-acquired Brooklyn pick.

The regular season is less than a month-and-a-half away, with none other than the Cavs and Celtics kicking it off on October 17th. It’s gonna be the most hyped opening-season game in recent memory.

CSNNE: Ainge Recognizes Sacrifices of Hayward and Irving | Can Wizards Take Next Step?

Boston.com: Morris Brothers have Close Relationship | The Parallels Between Hayward and Irving

Sporting News: Kyrie is a Superstar | Isaiah to Begin Rehab this Week