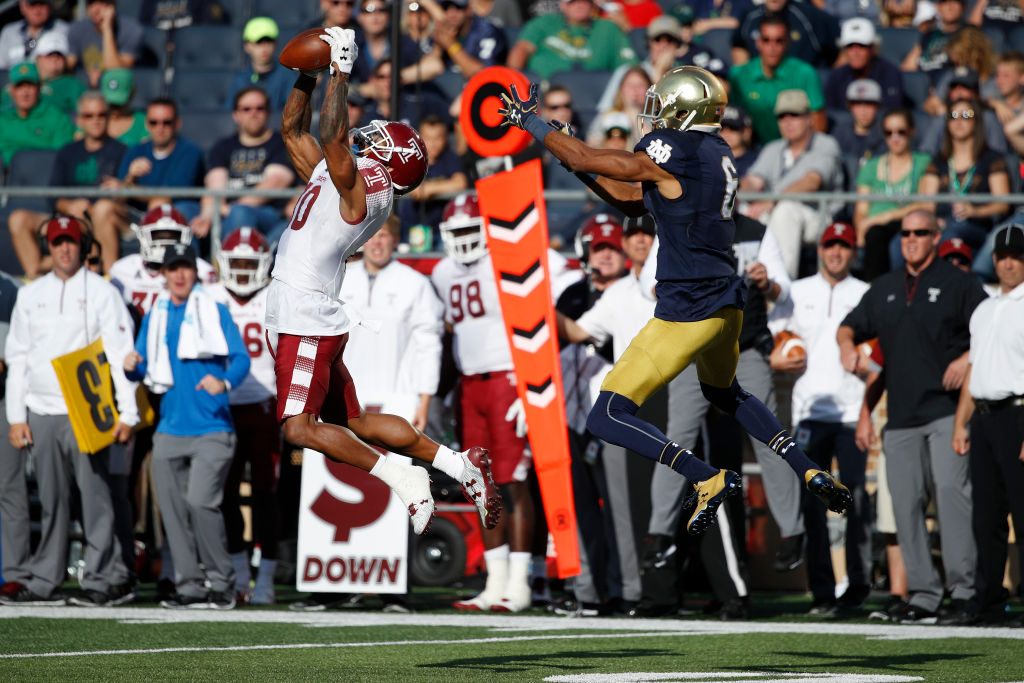 On Saturday afternoon, the Geoff Collins era officially began as the Temple Owls opened up the season on the road against the Notre Dame Fighting Irish. Collins, the former University of Florida defensive coordinator has some big shoes to fill as Temple’s new head coach with Matt Rhule departing for Baylor University.

In four seasons at Temple, Rhule led the Owls to back-to-back bowl games and won an AAC championship last season. However, this year’s Owls did not get off on the right foot as the Fighting Irish steamrolled the Cherry and White 49-16.

It was not a game to remember for the Owls, especially on the defensive side of the ball. But there were still a few positives that Temple can take with them heading into their Week 2 matchup against the Villanova Wildcats.

With that being said, here are three takeaways from the Temple’s opening season loss:

1. Temple’s run defense must improve drastically to have a chance in the AAC

Over the last few seasons, Temple has been known for their tough and physical style of defense. The Owls’ defense swarms to the football and also forces turnovers. However, that was not the case on Saturday afternoon as Notre Dame’s offense gashed them for 422 rushing yards.

If you give up over 400 plus rushing yards in any level of football, you will not win many games. Temple had no answer for running backs Josh Adams, Dexter Williams, and quarterback Brandon Wimbush.

Adams led the attack with 161 yards on 19 carries and two touchdowns, while Williams chipped in with 124 yards on six carries and a touchdown. Both running backs ripped off runs of 60 plus yards that would’ve easily been less than that if the Owls’ defenders tackled better.

Wimbush, who was making his first-ever start, ran for 106 yards and a touchdown, plus threw for 184 yards, two touchdowns, and an interception.

Last season, the Owls only gave up 130.5 rushing yards per game, which was good for 25th in the country. Nevertheless, Temple will need to tackle better because conference play is only two weeks away.

2. Temple’s offense is a work in progress but they have playmakers

Just like the defense, Temple’s offense lost a few key players to the NFL and graduation over the past two seasons. Last season, they were led on offense by quarterback Phillip Walker and running back Jahad Thomas.

However, fast forward to this season and there is a new combination in the Owls’ backfield with redshirt sophomore quarterback Logan Marchi and junior Ryquell Armstead. Marchi did not look bad in his first start as he completed 54.3 percent of his passes for 245 yards and two touchdowns.

Armstead, on the other hand, is coming a 919 rushing yard season in 2016 and could definitely top that this season, despite sharing the backfield with Jager Gardner. Temple is known for their two-back system, which will bode well for both running backs and keep them fresh.

Against Notre Dame, Armstead had minor success, rushing for 67 yards on 19 carries, while Gardner had 19 rushing yards. Outside of the two running backs, the Owls have two talented wide receivers in Keith Kirkwood and Ventell Bryant.

Both Bryant and Kirkwood are big-time playmakers and should be viable targets for Marchi throughout the season.

3. Who? Mike Jones! The NCCU grad transfer appears to be another NFL bound player for Temple

I know it is only Week 1 of the regular season, but cornerback Mike Jones showed why he has the potential to be an outstanding player for the Owls. The grad transfer from North Carolina Central could have entered the NFL Draft this past spring after having an amazing four-year career for the Eagles.

At NCCU, Jones started in 35 games, racked up 114 tackles, 36 pass breakups, and 11 interceptions. He is a great defender and return specialist and was recognized for it in the 2014 and 2016 seasons being named first-team All-MEAC.

On Saturday afternoon, the 5-foot-11, 187 lbs. cornerback showed off his defensive prowess and speed as he intercepted Wimbush and almost returned it for a touchdown in the third quarter.

Jones will be fun to watch as the season progresses because he not only brings a veteran savvy to the Owls’ secondary but can make game changing plays.