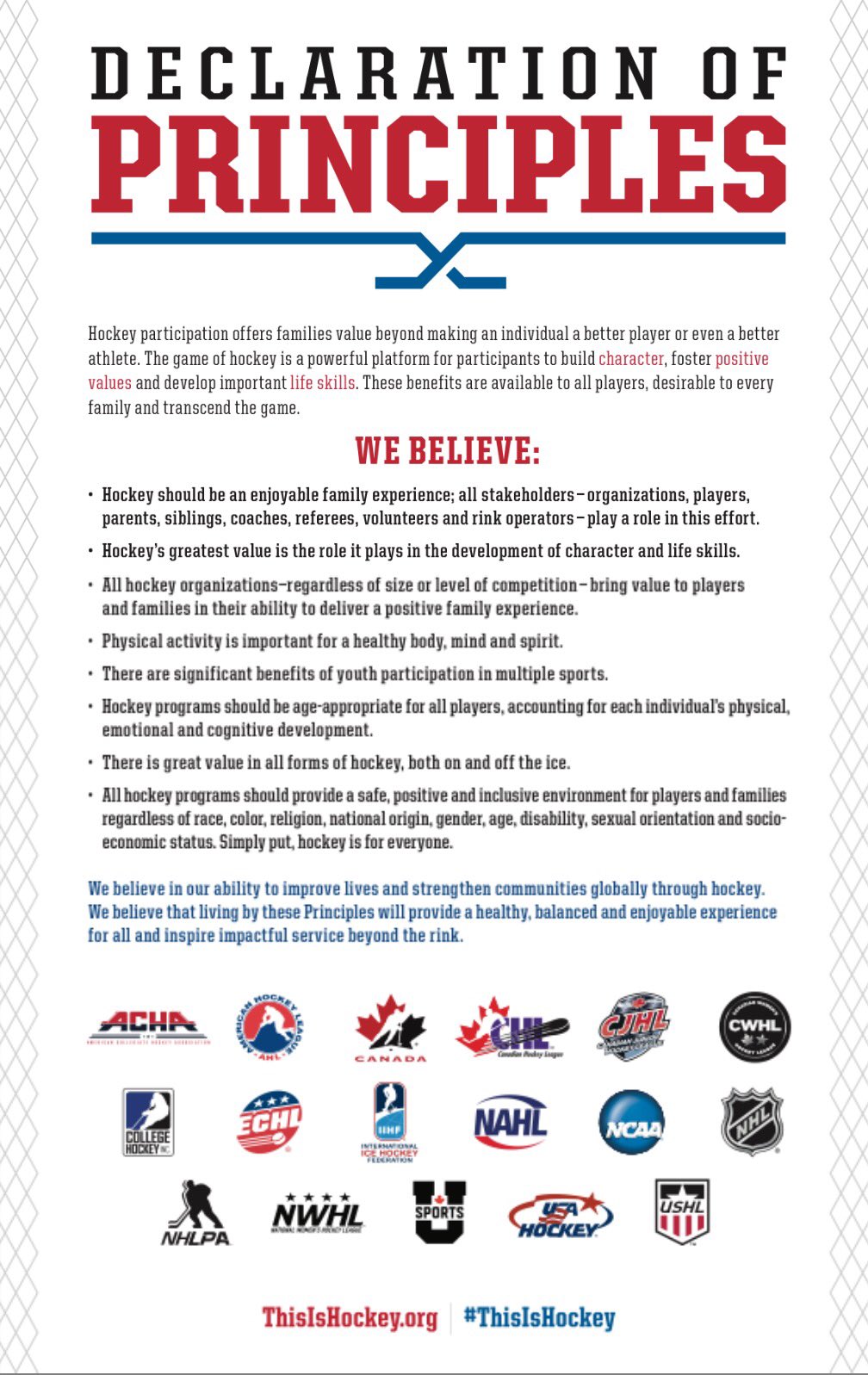 Today, the NHL held a media event to release to the world its Declaration of Principles that are supposed to outline what it is that the NHL believes hockey is and, to some extent, is not.

Instead of anything revolutionary, this declaration of principles reads like a combination of a fan code of conduct in a minor hockey rink and an attempt to make it look like the league is progressive, when in reality it’s anything but.

The idea behind these principles is simple – the NHL wants to project the notion that hockey is for everyone, and that there should be no obstacles for participation in hockey, whether as a fan or a player. It’s a noble idea, but it’s not without its problems. Some of these guiding principles (physical fitness being important for a healthy mind, body and spirit; kids should play more than one sport; hockey should be both age- and skill-appropriate) are just good common sense. There’s evidence to suggest that multi-sport athletes are going to be better at whatever sport they end up choosing (hello Aaron Judge), and kids are less likely to burn out with respect to their participation in sports if they aren’t restricted to one at an early age.

There are three principles, however, that sound good but aren’t necessarily being adhered to by the NHL itself.

The league believes that hockey should be an enjoyable family experience, and that all stakeholders play a role in ensuring that families can enjoy the game of hockey. On the surface this is fine, but there are countless things that happen AT NHL GAMES that might prevent families from actually enjoying the product on the ice. Ice girls, for one, aren’t necessary in the game and might not be providing the positive role models that organizations hope. Many of the promotions surrounding hockey games are geared towards alcohol consumption, which is prohibitive for families in a number of ways. The culture surrounding the game, especially with respect to violence on the ice, doesn’t exactly scream family-friendly; this isn’t an argument for removing violence from the game, but an acknowledgement that there are aspects of it that may not be ideal for family entertainment.

Another of the principles laid out in the declaration says that “all programs should provide safe, positive and inclusive environments for players and their families, regardless of race, colour, religion, national origin, gender, age, disability, sexual orientation, or socio-economic status”. At its core, there is nothing wrong with this sentiment, but the word should is the problematic part. The NHL and other leagues can say that they want hockey to be inclusive, but unless that notion is embraced by fans too, there’s no way of policing the success of this ideal. As long as NHL teams and their affiliates continue to ignore fans outside their target demographics, this principle is nothing but lip service. While it was nice to see teams participating in the Hockey is for Everyone campaign last season, there’s still a fundamental misunderstanding of what it means to be truly inclusive. A Pride night at a hockey game is a great start, as is using Pride Tape in a warmup, but until it feels less like a cursory gesture and more like a meaningful attempt at welcoming all fans into the fold progress can’t happen.

The final principle in the document that really doesn’t hold up on closer examination says “hockey’s greatest value is the role it plays in the development of character and life skills”. While it’s not reasonable to expect that all athletes are perfect humans it’s fair to say there’s an expectation, reasonable or not, that professional athletes conduct themselves in a manner that allows them to be perceived as role models without question. When someone like Patrick Kane is touted as the face of the league despite some very serious sexual violence allegations against him, it’s a slap in the face to people who would like to be able to cheer for a team or a league without having to justify their fandom. For example, Melissa Geschwind spent a considerable amount of time and effort contacting NHL teams regarding sexual assault, domestic violence and misogyny within the organizations, to little avail. That’s not to say that teams aren’t privately working at improving their records in this respect, but that teams haven’t yet realized that making concerted efforts to inform fans about those initiatives is important. Whether teams are working at it is almost irrelevant when the league itself chooses to espouse ‘building character’ at an event featuring Patrick Kane.

The NHL “officially” codifying what it feels are the behaviours and attributes that people in hockey should possess isn’t a bad thing on its surface, but most of what’s been written down shouldn’t have had to be written down in the first place. That the league felt it necessary to remind people hockey is a game that should be enjoyed at all levels isn’t all that heartening.

Hockey may be for everyone in theory, but it’s certainly not there yet.