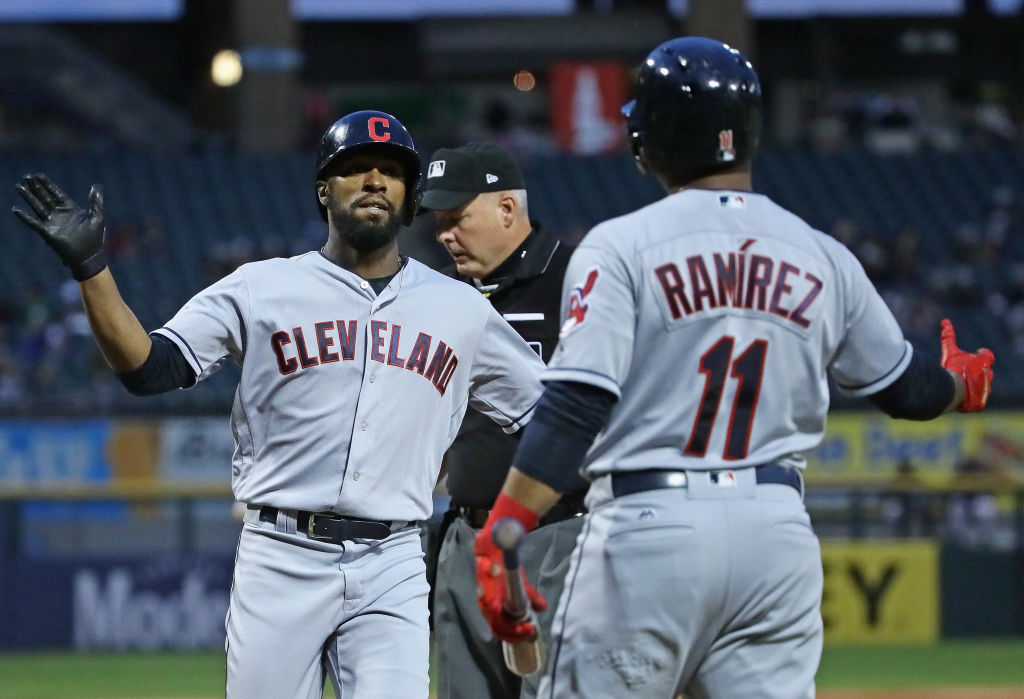 The trend to score big and score early has gone through almost every game on this win streak, and tonight’s game falls right in line with that. One difference that stood out big time was the starting pitching, which has been dominant up until this point.

Danny Salazar made his first appearance in tonight’s game, going into it knowing very well the short leash he’d been put on, not allowed to go beyond three innings and/or around 60 pitches. Danny wouldn’t need even that much, as he only made it 26 pitches into the first inning, giving up a run off the bat of Jose Abreu, walked two, hit a batter and gave up a three-run homer to Matt Davidson before Terry Francona went to the ‘pen. Since the Yankee’s series, this is the first time during the win streak that a team has taken the lead over Cleveland.

Before Salazar even came to the mound, Cleveland’s offense gave him a three-run lead buffer to work with. As noted above, Chicago answered back quickly, cracking down on the rare weakness shown from Indians pitching.

Aside from the WhiteSox’ four runs in the first inning, the Indians bullpen got to work shutting down the offense and kept it there for the remainder of the game. The only shakiness that showed out of the bullpen was reliever Nick Goody, who looked to be in the same funk as the starter, walking two out of the gate before being pulled after 1/3.

Cleveland’s offense, however, would continue to put runs on the board, following the early lead set by Jose Ramirez, Austin Jackson and Brandon Guyer. They added one more in the second, another Ramirez homer (25), and two more in the third from rookie Greg Allen, who scored two but was tagged out at third.

Similar to how Chicago got to the Indians starter, Cleveland made pretty quick work of the ChiTown starter David Holmberg, who lasted three innings, gave up six on six, walked four and struck out two.

In the top of the ninth, with two one and catcher Yan Gomes at the plate, Cleveland’s extended by three with Gomes fifth three-run shot on the season, putting the Tribe up 9-4.

Cleveland took hold of their 13th consecutive win, extending their already sizable lead in the ALC over the Minnesota Twins, while chipping away at the Houston Astro’s lead for home-field advantage in the post season. The Tribe’s magic number is now down to 14 games.

On an extra note, the Indians infield continued to mock 1B Carlos Santana again after getting hit by a pitch in the knee. Francisco Lindor and Ramirez started making fun of Santana while in Detroit after being hit in the arm, and has since been the running joke with the infield. Note, Santana is not amused, but it looks like everyone else is!

Seven innings in the books, it's about that time again! Help me pick tonight's #TribeTopThree!

Ramirez continued on his GOAT game as he has done throughout the season, and even more so during this win streak, as he received AL Player of the Week honored earlier today. In tonight’s game, Ramirez had two solo-homers, one in the first and one in the second, going 2-5 with two RBI and two runs.

After Danny’s “makeshift major league rehab stint” it turned into a bullpen game fairly quickly. First up, righty Nick Goody, who seemed to struggle with his command just as Salazar had done before him. Next, Dan Otero, going a full two innings, struck out one and gave up just two hits, no runs. This “no runs” groove continued down the line of relievers, Zach McAllister, Joe Smith and Tyler Olsen, allowing a collective seven hits, zero walks, and seven strikeouts heading into the eighth. Setup man Bryan Shaw came out and got the job done, pitching into the ninth, giving up two hits -again, no runs- and struck out one before handing things over to Shawn Armstrong to close out the game. Otero got the win tonight, his third of the season.

The rookie seems to be playing right at the level of the big boys, getting two RBIs in, adding to the lead, though over running the bases and ended up getting tagged out at third. Outside of the batter’s box, his glove has also played a big part in this teams success in September, playing with the confidence you should look for in a centerfielder. In the bottom of the fourth, he made a spectacular catch on the warning track in center, stealing the potential for extra bases from Adam Engel. Overall, Allen went 1-4 with those two RBI.

Cleveland and Chicago will meet again for game three off this four-game series, scheduled for an 8:10 first pitch. On the mound for the Wahoo’s, Carlos Carrasco, who’s 13-6 on the season with a 3.67 ERA. The White Sox will send righty Reynaldo Lopez to the bump, his fourth start for the season, currently 0-2 with a 6.06 ERA.