Could Manny Machado Trade Make Sense For Mets This Winter? 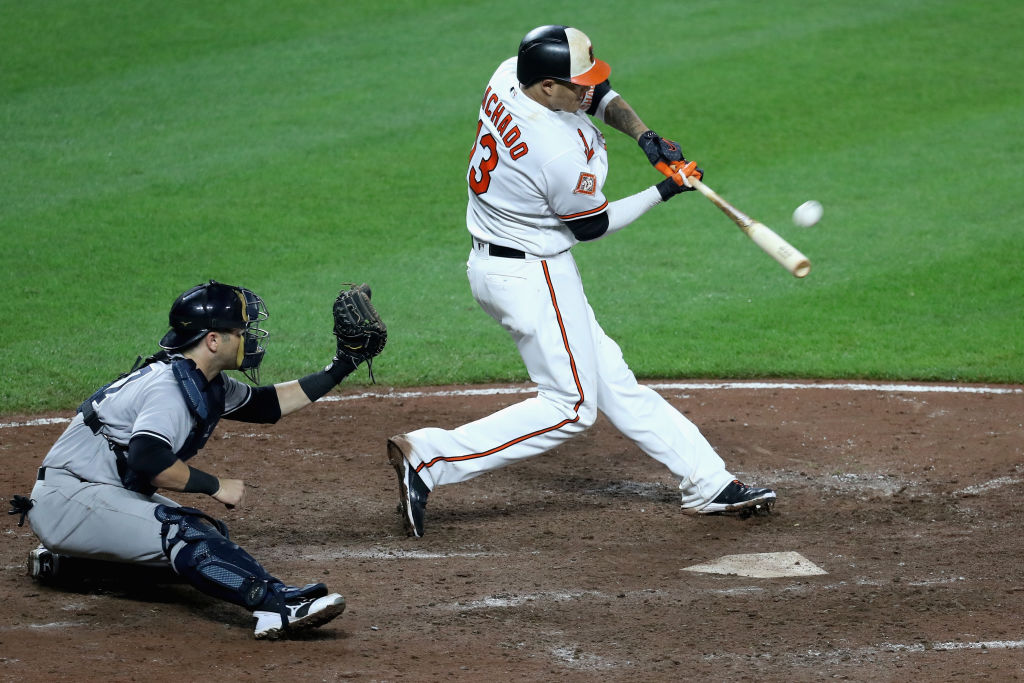 Could Manny Machado Trade Make Sense For Mets This Winter?

The New York Mets are in need of a full time third baseman this winter, and there could be a big one available in the trade market. Baltimore Orioles’ superstar Manny Machado, who is eligible for free agency after the 2018 season, may be shopped due to the O’s concerns about their ability to sign him long term. Machado, who is batting .273 with 32 homers and 91 RBI’s this season, could draw the interest of at least five teams. The Mets could be on that list, Nick Cafardo of the Boston Globe reports, creating an interesting situation to monitor.

BALTIMORE, MD – SEPTEMBER 06: Catcher Austin Romine #27 of the New York Yankees looks on as Manny Machado #13 of the Baltimore Orioles hits a walk off two RBI home run to give the Orioles a 7-6 win at Oriole Park at Camden Yards on September 5, 2017 in Baltimore, Maryland. (Photo by Rob Carr/Getty Images)

The other teams that Cafardo mentioned as potential suitors for Machado include the Philadelphia Phillies, Atlanta Braves, San Francisco Giants, Los Angeles Angels, and New York Yankees. The problem for the Mets is that a lot of teams on this list have better farm systems than them, leaving them with seemingly little to offer the Orioles for Machado. Baltimore would likely ask for Amed Rosario or Michael Conforto in a Machado deal, two players who should be untouchable for the Mets. The Mets would probably consider using Dominic Smith as a piece in a deal for Machado, but a package with Smith as the headliner likely wouldn’t be enough to entice Baltimore to send Machado to Queens.

With few truly intriguing assets at his disposal, Mets’ General Manager Sandy Alderson may need to get creative in order to land Machado. Alderson did demonstrate some creativity by landing A.J. Ramos at the trade deadline to address his bullpen for next season, so he will have to find a way to land Machado without having the best hand at the poker table. One way to do that could be to craft a three team trade, a scenario that would see the Mets send something of value to a third team, which would then send prospects to Baltimore to satisfy them enough to move Machado. The odds of this happening are pretty slim, but it will be interesting to monitor once Hot Stove season kicks off.