Five Mets With Something To Prove In September 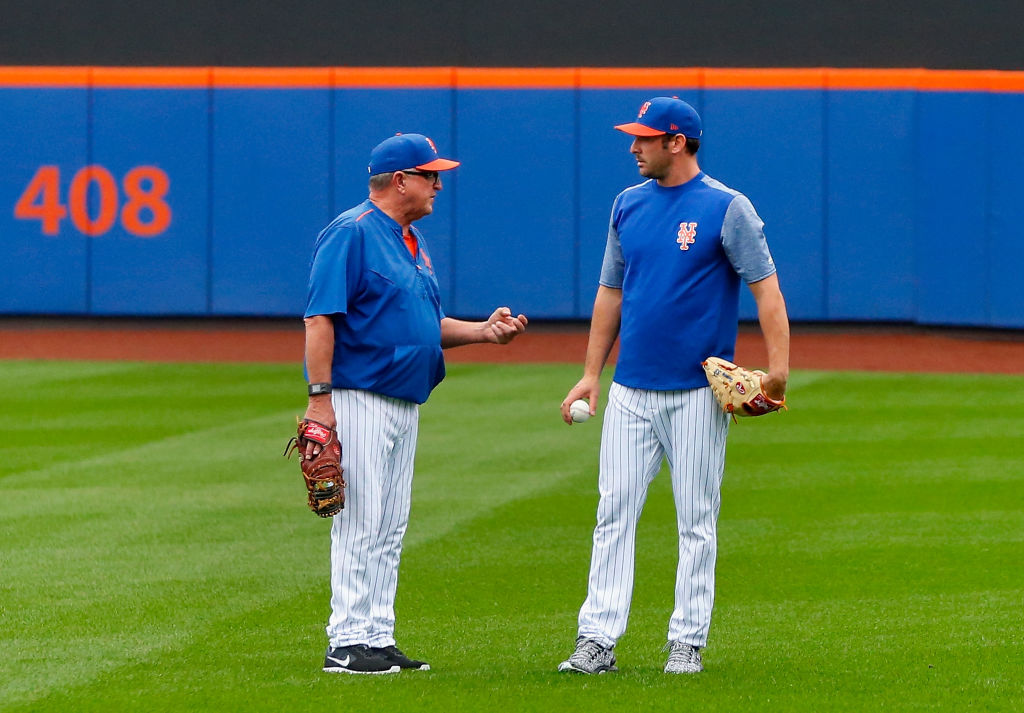 Five Mets With Something To Prove In September

The New York Mets’ season is over, with only 22 meaningless games left before the players and coaches can go golfing for the winter. 2017 was a bitter disappointment for the Mets, who entered the year with World Series hopes and will probably end it with at least 90 losses for the first time since 2009. The wins and losses don’t really matter at this point for the Mets, but there are some stakes for a few players on the roster. Here are five guys with something to prove in September.

NEW YORK, NY – SEPTEMBER 06: Matt Harvey #33 of the New York Mets talks with pitching coach Dan Warthen #38 (L) on the field prior to a game against the Philadelphia Phillies at Citi Field on September 6, 2017 in the Flushing neighborhood of the Queens borough of New York City. (Photo by Jim McIsaac/Getty Images)

Matt Harvey: The biggest storyline for the Mets in September will be how Matt Harvey looks over his final few starts of the season. Harvey was whacked in his return from the disabled list last Saturday, giving up seven runs in two innings against the Houston Astros, but demonstrated some improvement last night. The Cincinnati Reds only got two runs off Harvey in five innings, and while Harvey’s velocity was slightly up his location was hit or miss. Harvey has roughly four starts left this season, and he will need to continue to get better to demonstrate that the Mets can count on him in 2018.

Kevin Plawecki: Another player fighting for a job in 2018 is catcher Kevin Plawecki. Plawecki has been slow to develop but has looked better since his latest recall from Triple-A Las Vegas, batting .307 with four doubles, a homer, and three RBI’s. The Mets have always liked Plawecki’s defensive ability, especially his pitch framing skills, but if this improved offensive approach sticks it could be a boon for them. General Manager Sandy Alderson recently indicated that he is comfortable entering next season with Plawecki and Travis d’Arnaud as the catching tandem, but Plawecki can further solidify his status with a strong month.

Rafael Montero: The Mets have publicly stated that they are looking for rotation depth this winter. That is in no small part due to the struggles of the starters as a whole, including Rafael Montero. Montero has pitched better in the second half, going 3-4 with a 4.84 ERA, but that doesn’t say too much since he is remarkably inconsistent. The Mets have been hammering Montero with the need to simply throw strikes, and when he does Montero has demonstrated the ability to get big league hitters out. The problem is that Montero will start nibbling the zone occasionally, and those starts are when he gets hammered. Montero has a few weeks left to show that the Mets should keep him in the mix for next season, and what he does with them could impact his status on the 40 man roster going forward.

Brandon Nimmo: Aside from the starting rotation, the outfield is a hot mess for the Mets right now, with all four of the team’s primary outfielders on Opening Day gone through trade or the disabled list. The outfield has become the land of opportunity for young players such as Brandon Nimmo, who has been starting every day since Michael Conforto got hurt in late August. Nimmo has taken advantage of his regular playing time, batting .304 with three homers and 11 RBI’s, and showcased his strong eye at the plate by drawing 12 walks. While the jury is out on whether Nimmo can be an every day player, he can make a strong case to be a bench player on the 2018 roster or potentially as a platoon starter in center field with Juan Lagares. Lagares has a tremendous glove and hits well against left handed pitching, but he has historically struggled against righties. Nimmo has demonstrated splits that would make him a good fit for a platoon, batting .309 against right handers but collecting only three hits in 18 at bats against southpaws. If the Mets aren’t seriously considering a center field platoon right now, Nimmo can make them do it with a strong finish to 2017.

Erik Goeddel: The Mets are looking hard for dependable relievers to count on in next year’s bullpen, and outside of the back end there aren’t many to be found. Many fans are keeping an eye on youngsters Jacob Rhame and Jamie Callahan, two young arms acquired in trades this summer, to see if one of them can earn a bullpen slot with a big month. The more intriguing player to watch is Erik Goeddel, who has pitched well since being added to the big league bullpen a few months ago. Goeddel had a strong rookie season in 2015, pitching to a 2.43 ERA and earning a spot on the postseason roster, but injuries ruined his sophomore campaign. The Mets banished Goeddel to the minor leagues this spring after he pitched to a 4.54 ERA in 2016, but he has pitched pretty well since his latest recall, carrying a 3.95 ERA and 1.21 WHIP into today’s action. Goeddel has the stuff to be a capable middle reliever, and he will have plenty of opportunities to show it in September with the Mets getting little from their starters on days that Jacob deGrom doesn’t pitch.