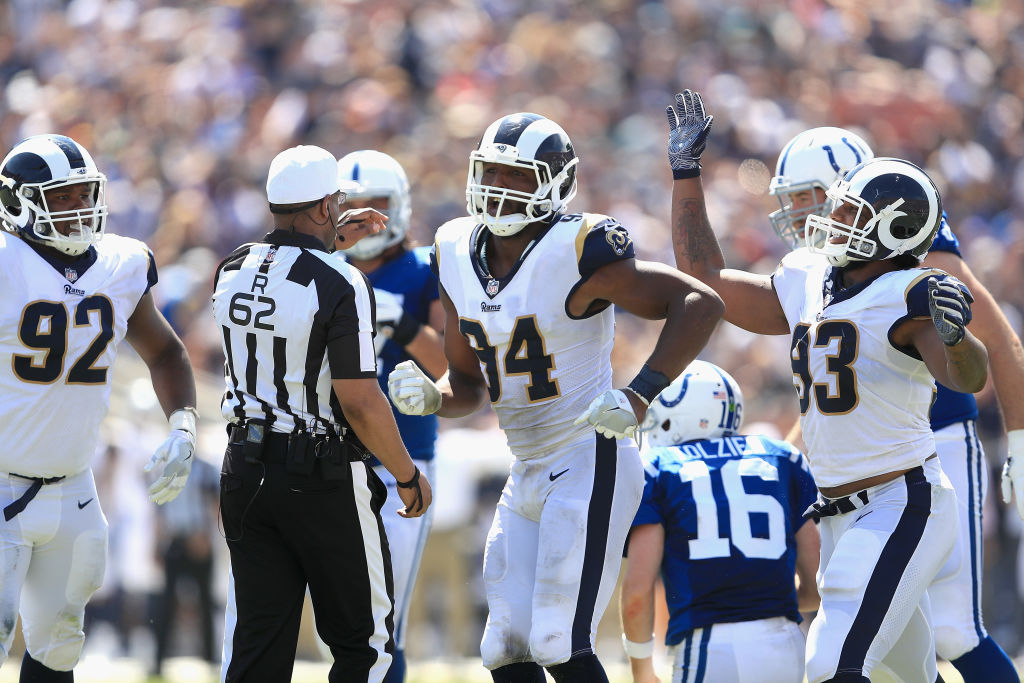 The Colts began their 2017 season the way they’ve kicked off so many others, by giving up a scoring drive. After a quick run stop, the Indy defense watched as the Rams went to the air and were a bobbled 3rd and 3 pass from not having to settle for a 50-yard field goal.

The Colts offense, featuring some guy who happens to throw footballs sharing the backfield with 67-year old running back Frank Gore, ran twice for zero net yards and then the guy who throws balls gently floated up a pick six to…I don’t really care…Michael Brockers, the nose tackle. Wait, THE NOSE TACKLE?? ARE YOU KIDDING ME??? *dies a little inside* 10-0 Rams

Indianapolis followed up their amateur performance on offense with a rather professional one, a nice drive that was killed by none other than amateur coaching. What’s-his-face threw a short pass to rookie running back Marlon Mack, who turned it into a 21-yard touchdown. It was called down at the one but was clearly and objectively a score. Chuck Pagano elected not to challenge but instead ran a quick-snap play as though he were keeping the other team from challenging. All the while while flabbergasted, incredulous commentators and fans looked on helplessly. Adam Vinatieri chipped in a 20-yard FG to make it 10-3 when it should’ve been 10-7.  Of course, 4 more points wouldn’t have made a significant difference.

Just a quick note, not only did that failed challenge call rob the team of points, it robbed Mack of being able to say his first NFL regular season touch went to the endzone, and robbed the guy who plays a quarterback on TV of being able to say he was up to 3 touchdown vs 8 interceptions for his career.

Later today, we’ll hear Pagano talk about how it’s hard to make football decisions during football games, and how football is essentially rocket science, and we don’t really know anything, blah blah, blinders on, chop some wood, #horseforgedorsomething.

By the way, guys, Jim Irsay says we should be okay with losing a bunch because that means we will win more Super Bowls because he is unaware that making the playoffs is how you reach championship games in the first place. I would link to the Indy Star article with the photoshop pic of Irsay sitting on some ridiculous throne (It’s well-written and all), but believe me, if you haven’t seen it, you don’t want to.

Late in the 1st quarter, with the offense beginning to move the ball well again, T.Y. Hilton coughed up a fumble while diving for the first down, the Colts’ second turnover in the first 15 minutes of football.

Indy’s defense spent the first quarter keeping this game from turning into a real disaster.  The offense rewarded them in the second by continuing to sputter.  The “good” news?  They kept the right punter. Rigoberto Sanchez has a leg on him, for what it’s worth. Of course, the fact that I’m sitting here trying to find a positive, and it’s the punter IS THE WORST THING IN ALL OF FOOTBALL.

You’ve just given up 27 points in a half to the team with 2016’s sh*ttiest offense.  Your own offense has countered by mostly just watching.  What do you do?  Do you switch quarterbacks? (unequivocally yes) Is the other guy really any good? (doubtful) Can a team interview new coaching candidates at halftime?

Well, what you do, apparently, is a quick three and out.

In the second half, even when things went the Colts’ way, they still didn’t. Tavon Austin muffed Sanchez’s 49-yard punt (muffed is a fun word), which was recovered by Colts ILB Jeremiah George. But this is the Pagano-coached Colts with an apparently amateur quarterback under center. They settled for a field goal, which was missed.  Not even Vinatieri is having a good day.

Greg Zuerlein from 44 yards out with 7:23 left in the 3rd quarter. 30-3. Zuerlien has more field goals in this game than Tolzien has touchdowns in his career.

Tolzien followed it up with his second pick six, and his 9th interception in in 13 career games (4 starts). It’s 37-3. I don’t want to talk about it anymore. Should we just tell jokes now?

What do you call a basement full of Texans fans?

What happened to the joke Scott Tolzien told his receivers?

The only guy who got it was playing defense. PICK SIX. Hey-oh.

So blind people can hate them too. *straightens collar nervously*

So, Margus Hunt had a monster sack to finish off the 3rd quarter. It won’t matter in the end, but I’m taking it as a positive to see a defensive play like that. Mack rattled off a 24-yard run.  This sort of thing  gets lost in the sadness (mostly because the majority of Colts fans have already stopped watching the game).

Brissett’s first pass as a Colt was a 50-yarder to Donte Moncrief, down the left to the 5-yard line. Marlon Mack, who was accidently cheated out of a TD earlier, finished off the drive with his first official touchdown as a pro.  Tolzien immediately removed his helmet on the sideline.  Yeah, you’re done, buddy.

Vinatieri, who is apparently broken now, missed the extra point.

Of course, at 37-9, no one had any silly dreams about a comeback. THAT SORT OF THING CAN’T HAPPEN WHEN THE COLTS COACHES WAIT UNTIL THE 4TH TO BENCH A MISERABLY STRUGGLING QUARTERBACK.

Marlon Mack, fumble, recovered in the endzone by Brissett to avoid the touchdown…safety. 39-9.

Ugh. This is atrocious. Back to the jokes.

How do you get Ryan Grigson off of your front porch?

Pay him for the pizza.

Touchdown LA, a rough 3-yarder by Malcolm Brown. 46-9. Can we just go back to that joke where Grigson is a pizza delivery guy?  I liked that.

Did we really, truly believe this would’ve gone any other way? No. But there was some hope. The Rams aren’t a very good team. It was conceivable to imagine the 6th-year part-time quarterback playing within his limitations (of which he surely must be aware by now), and the defense doing just enough to keep them in the game and come out with a win.

Unfortunately, this Tolzien guy has spent his career with game manager skills (nothing wrong with that), trying to be Brett Favre (Why would you do that?), and yet, somehow, he is still playing professional football. Listen, Mr. Tolzien, I implore you, watch some film of Alex Smith, one of the finest game managers in all of football. That’s a guy you could emulate. You are not Aaron Rodgers, or Tom Brady, or even Joe Flacco, and there’s nothing wrong with that.  Just check out Smith, okay?

This team looked confused and unprepared. That’s been the norm for a few years now. But without a decent backup quarterback, things went from shaky to downright bleak.  It’s just one game, though, and this is the league of any given Sunday.