Derek Fisher says there was no alignment with Knicks, talks triangle offense 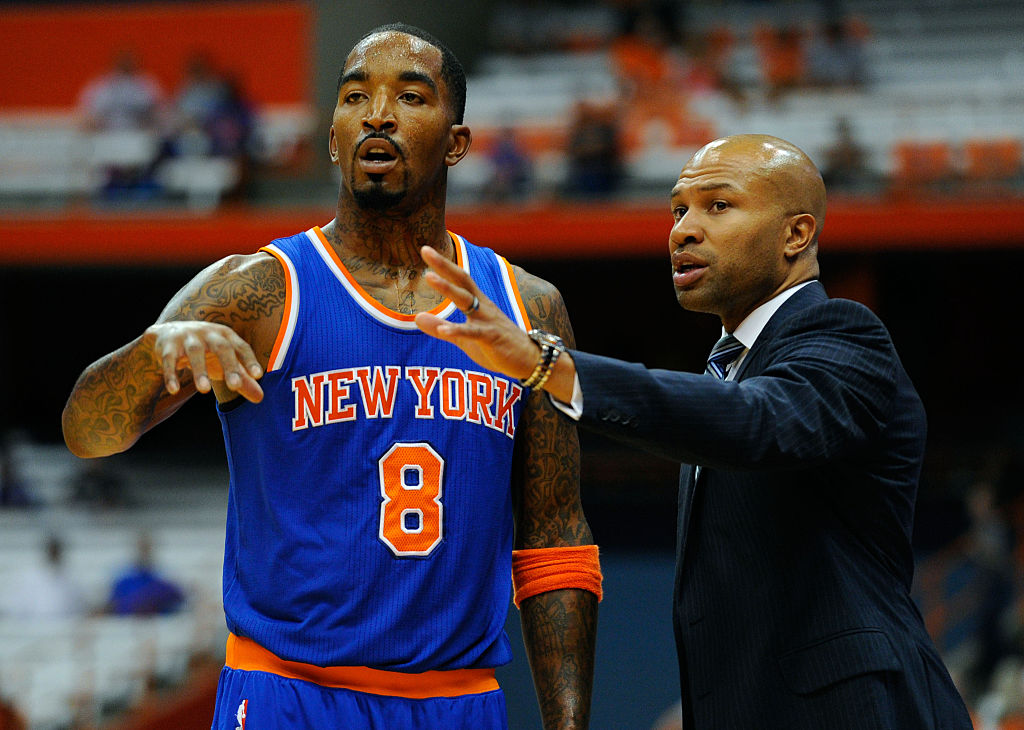 Derek Fisher says there was no alignment with Knicks, talks triangle offense

Phil Jackson and Derek Fisher have combined to collectively win 18 NBA championship rings over the course of their basketball careers. Together, they couldn’t even guide the Knicks to as many wins (17) during the 2014-15 season. Such a partnership was doomed from the start with each party taking on a role they had no experience in; Jackson as Knicks President and Fisher as the team’s head coach.

With his New York tenure fully in the rearview mirror, Fisher is shedding light on why things went wrong. His professional journey that took him from the hardwood to the sidelines will now taken him to the ballroom, as he’s set to compete on Dancing With The Stars. In talking to Rich Eisen as part of his press promotion, Fisher had the following to say about the Knicks:

“If there’s not an alignment in who we’re going be as an organization, our mission statement, core principles, the type of people we want working for us and the guys we want playing for us, and the style of play we want, to put our guys in the best positions to be successful, it does not work.”

Fisher said that each season’s failure in New York was part of a “larger issue that needs to be figured out.” He seemed to allude to the idea that the team’s front office had an unrealistic expectation for steering the Knicks in a successful direction, adding that it couldn’t necessarily have been done in just 18 months. There was little unity in New York’s overall vision.

As for Jackson’s role in the downfall, Fisher said the Hall of Fame coach turned inexperienced executive was more focused on how he could make an impact on the court and wanted to be involved in practices and the teachings of the game, something that clearly fell more within Fisher’s job description. He added that Steve Mills was centered more on things behind the scenes in the business of running a basketball team.

While Jackson wanted his presence to be felt, Fisher conveyed that “I always felt like [James Dolan] respected my space as the coach.”

Things didn’t end there. Can the triangle offense work in 2017? Fisher wasn’t so sure, but it’s safe to say that the way in which the Knicks gave it a try influenced his mentality.

“I don’t know if it can work the way we did it, the same way you can’t teach ninth grade algebra the same way you did twenty years ago. It doesn’t mean it’s not algebra, but you just can’t approach it the same,” he said. “The kids are different. The way they learn and receive information is different.” Fisher said that elements of the system could work with more variety in order to embrace today’s game.

This is something that appeared obvious throughout Jackson’s entire tenure with the Knicks, but it was clear he was resistant to change, or simply didn’t know how to adapt. Fisher seems to understand, though. Perhaps he could have experienced more success if Jackson was more open to going with the flow.