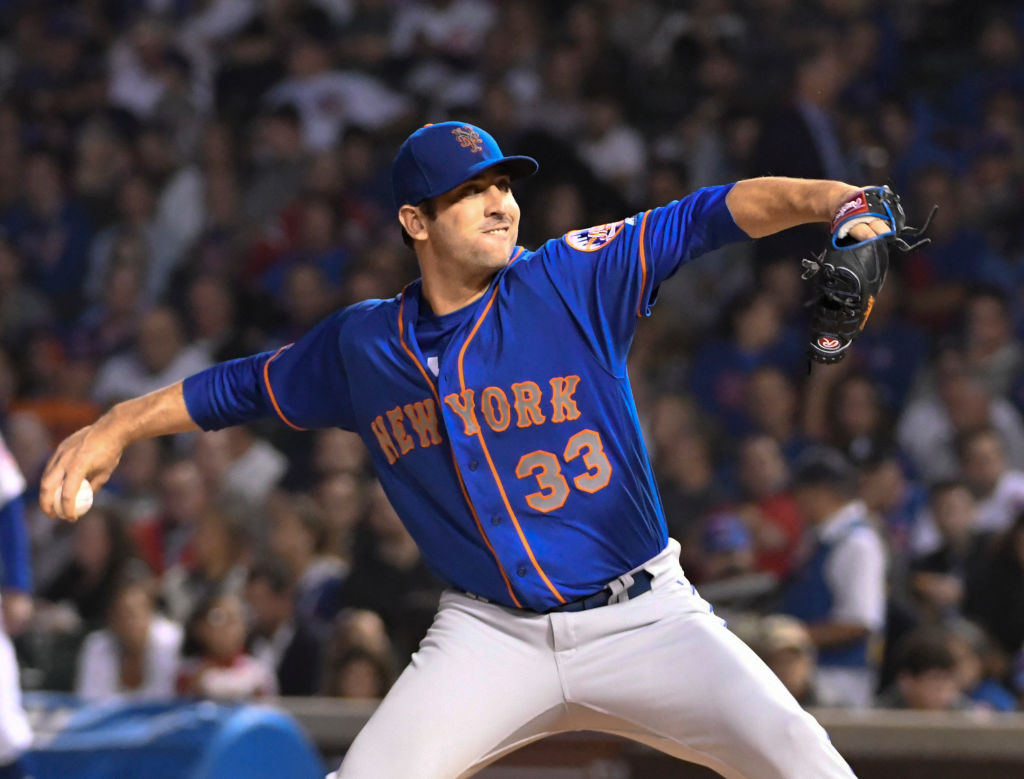 The New York Mets gave Matt Harvey the ball last night for the third time since activating him from the disabled list, and it was a familiar struggle for their former ace. Harvey labored through 3.1 innings, getting tagged for five runs on seven hits and four walks, although Hansel Robles allowed three of the runs to score after Harvey departed with the bases loaded. The velocity was good enough for Harvey, who hit 95 miles per hour with his fastball, but his command was off as the Cubs’ lineup worked deep at bat after deep at bat against him. Harvey tossed 86 pitches to retire 10 batters, and he was visibly frustrated after the game, telling reporters that his performance was “terrible”, Newsday’s Marc Carig reports.

CHICAGO, IL – SEPTEMBER 13: Matt Harvey #33 of the New York Mets pitches against the Chicago Cubs during the first inning on September 13, 2017 at Wrigley Field in Chicago, Illinois. (Photo by David Banks/Getty Images)

The outing was definitely poor, a statement that can be made far too often about Harvey’s starts since the start of last season. Harvey admitted that he hasn’t gotten many positives out of the past two years and is frustrated that a lot of his hard work isn’t producing results. There were definite positives to Harvey’s start last night, as Carig noted that he demonstrated the ability to bust his fastball in on hitter’s hands and place his slider better, but right now the big issue for Harvey is simply learning to pitch more consistently with his reduced stuff.

Matt Cerrone of MetsBlog sums up Harvey’s dilemma perfectly, indicating his belief that Harvey is still trying to pitch with a 98 mile per hour fastball he doesn’t have anymore. Back in his best years, Harvey was a big time strikeout pitcher, averaging over a strikeout an inning in 2012 (70 K’s in 59.1 innings pitched) and 2013 (191 K’s in 178.1 innings) while nearly matching that in 2015 (188 K’s in 189.1 innings). That strikeout rate has fallen drastically in the past two years, as Harvey picked up 76 strikeouts in 92.2 innings last season and has only 60 punch outs in 80.2 innings pitched. The decline in velocity from 98 to 95 can easily explain the drop in strikeouts, and without that velocity Harvey can’t pitch the same way he did prior to 2016. 95 is still plenty of velocity, however, but Harvey will have to change the way he pitches.

Harvey will have to commit to changing up his game this winter to rely more on refining his command instead of hoping to rely on strikeouts. There are plenty of successful pitchers who don’t average a strikeout an inning, but they rely more on hitting their spots than blowing away hitters. Harvey could do both when he was at the top of his game, combining pin point control with excellent velocity to become one of the most lethal pitchers in the game. While there is no guarantee that Harvey’s top shelf velocity will ever return, his control is something that should be easier to figure out.

Even if Harvey fully accepts a change in strategy and approach, it will still take him time to figure out what changes need to be made. The Mets appear committed to Harvey, who they have no plans of non-tendering this winter, and he needs every opportunity he can to prove he is healthy and can pitch after surgery to address Thoracic Outlet Syndrome last season. Harvey was once in line for a $200 million contract when he hit free agency, but now he’d be lucky to get a tenth of that with the way he’s pitching. If the Mets are able to help Harvey change his game, it could be a mutually beneficial situation since they would get the best out of him in his walk year while Harvey could re-build his value ahead of free agency. Until Harvey is able to figure out how to work with what he has and find his control, however, the Mets should continue to expect frustrating results and inconsistency from the pitcher once known as the Dark Knight.